2 Koreans safe after vessel boarded by pirates off West Africa

2 Koreans safe after vessel boarded by pirates off West Africa 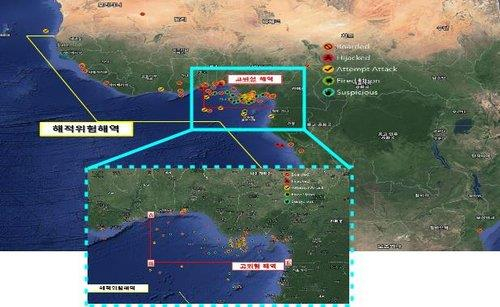 Above, an image provided by the Ministry of Oceans and Fisheries shows waters off West Africa where kidnappings are rampant. [YONHAP]


Two Koreans are free and unharmed after the vessel they were operating was boarded by pirates in international waters 200 nautical miles south of Abidjan, Ivory Coast in West Africa, according to the Ministry of Foreign Affairs Friday.

The ministry said those on board the 4,000-ton B Ocean, a tanker owned by SK Shipping, went missing at around 7 a.m. Thursday.

Seventeen Indonesians were on board along with two Koreans, who were the captain and the engineer of the ship.

The two contacted the shipping company after being released at around 11:55 a.m. on Friday, according to the ministry.

The pirates reportedly stole petroleum stored in the tanker and severely damaged the ship.