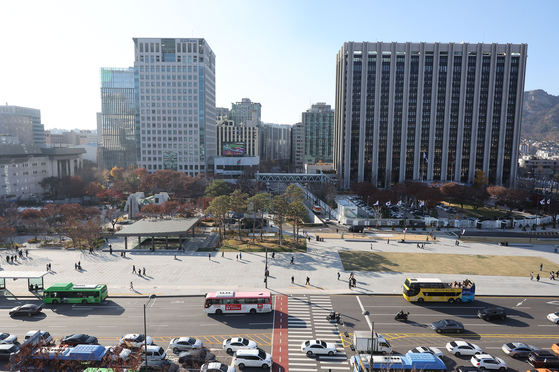 Gwanghwamun Square in downtown Seoul, where thousands of people are expected to show up on Thursday night to root for the Korean national football team’s first match in the 2022 World Cup [YONHAP]

Some 600 police officers will be dispatched to Gwanghwamun Square on Thursday night to control thousands of people expected to show up to cheer for the Korean national football team’s first match in the 2022 World Cup against Uruguay.

The square in front of the U.S. Embassy will be divided into several sections and each section will have a different exit route. When the game ends, the crowd will have multiple exits.

Police officers and officials from the Seoul Metropolitan Government and the Jongno District Office as well as the host of the event, the Red Devils, will look for potential safety risks at subway exits and other tricky areas.

A SWAT team will look for explosives.

When the game ends near midnight, police will move to nearby nightlife districts for safety management.

The plan was announced by the Seoul Metropolitan Government on Wednesday, a day after it allowed the Red Devils to organize so-called mass cheering events in downtown Seoul for World Cup matches this week and next.

The Red Devils is the official supporters’ club of the Korean national football team.

Korea will hold three games through next week: against Uruguay on Thursday at 10 p.m., local time; against Portugal on Tuesday at 4 a.m.; and against Ghana on Dec. 3 at midnight.

Big public events have been organized in Seoul during every World Cup since the historic 2002 Korea-Japan World Cup, when Korea’s national football team made it to the semi-finals, the farthest it’s ever gone in the World Cup.

Over 8 million people filled the streets of downtown Seoul during the 2002 games, according to government estimates.

This year, approval from the Seoul Metropolitan Government was delayed after the Itaewon crowd surge on Oct. 29, when 158 people were killed during Halloween celebrations in central Seoul’s Itaewon neighborhood.

A lack of crowd control and safety measures was blamed.

Police were heavily criticized for failing to take precautions.

While most local governments outside Seoul said they weren’t planning to organize any public events, some said they could allow private-sector organizers like the Red Devils to host some if they submit solid safety plans.

During a meeting on the Itaewon tragedy and Covid-19 on Wednesday, Prime Minister Han Duck-soo urged the Red Devils, police, fire authorities and local government offices to “thoroughly prepare” for the World Cup events and make sure “not a single” accident occurs.

Han asked members of the public to cooperate with authorities in keeping the events safe.

On the Itaewon tragedy, Han said all funeral services for the victims, including foreigners, have been finalized.

Discussions to overhaul the national safety system are underway to prevent similar accidents in the future, Han continued.

In regards to Covid, Han warned that the threat was still real, mentioning that over 70,000 people tested positive for the coronavirus on Tuesday. The prime minister said he strongly recommended all senior citizens get additional vaccine shots.