A Lee Jae-myung loyalist may be finally ready to sing

A Lee Jae-myung loyalist may be finally ready to sing 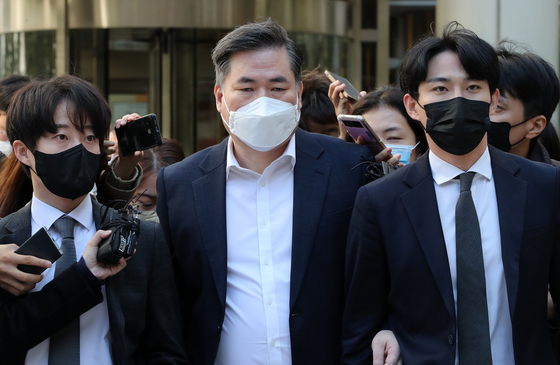 
Yoo Dong-kyu, a key figure in the Daejang-dong land development scandal who was recently released from pre-trial detention, might finally be preparing to spill some beans.

Yoo, the former acting president of Seongnam Development Corporation, has been strictly loyal to Democratic Party (DP) chief Lee Jae-myung throughout the scandal. He even threw his cell phone out a window during a prosecution raid of his apartment in Yongin, Gyeonggi, on Sept. 30, 2021.

Yoo was indicted on Oct. 21, 2021 for allegedly taking a bribe from Kim Man-bae, a large stakeholder in Hwacheon Daeyu, a company at the center of the scandal. His pre-trial detention would have expired in April but prosecutors indicted him on an additional charge of attempting to destroy evidence and his detention was extended.

It expired on Thursday. Yoo was released from the Seoul Detention Center in Uiwang, Gyeonggi.

And now, he seems to be willing to sing.

Yoo recently told prosecutors that he handed 800 million won ($558,269) to Kim Yong, DP chief Lee’s close ally, who was arrested Saturday for allegedly taking illegal funds suspected to have been used in Lee’s presidential primary race. Kim, deputy head of the DP-affiliated Institute for Democracy think tank, was in charge of fundraising for the primary for Lee.

Kim is accused of colluding with figures who profited from the Daejang-dong project, including Yoo, lawyer Nam Wook and Jeong Min-yong, who at the time was head of the Seongnam Development Corporation’s strategic project office.

The Daejang-dong land development scandal centers on allegations that an obscure and small private asset management company, Hwacheon Daeyu, and its affiliates reaped exponential profits from the 2015 project, which was during Lee’s time as Seongnam’s mayor.

Yoo’s recent confession led the DP to speculate that he had cut some sort of deal with the prosecution.

Yoo may have felt a sense of betrayal over Lee’s remarks to the media last December, when he said he did not know Yoo during his time as Seongnam mayor and only got to know of his existence after he became Gyeonggi governor. This comes despite Yoo having been a part of Lee’s entourage on a trip to Australia and New Zealand in 2015.

Yoo told the Hankook Ilbo in an interview Friday in response to a question on Lee’s knowledge of the political funds: “How could he not know?” he said.

In a press conference Friday, Lee said that he didn’t receive “a single piece of candy” in reference to the funds allegedly used for his presidential election campaign.

Legal insiders speculate that Yoo was spooked after he was indicted last month on additional charges of corruption related to the Wirye urban development project, which straddles eastern Seoul and Gyeonggi, and is considered a smaller version of the Daejang-dong scandal.

On Sept. 26, prosecutors indicted Yoo, Nam, and accountant Jeong Young-hak on charges of corruption related to the Wirye project. They were accused of trading inside information to get a private asset management firm selected as a partner for the project in 2013.

“Loyalty? There is no such thing in this world,” Yoo told the JoongAng Ilbo on Sunday. “I lived in an illusion. I learned a lot while meditating for a year in the detention center. I realized I was chasing after something futile.”

On Monday, Yoo appeared at the Seoul Central District Court in southern Seoul for a hearing on lobbying and preferential treatment allegations in the Daejang-dong development project.