After a hectic 2022, P1Harmony plans to take on even more in the new year

After a hectic 2022, P1Harmony plans to take on even more in the new year 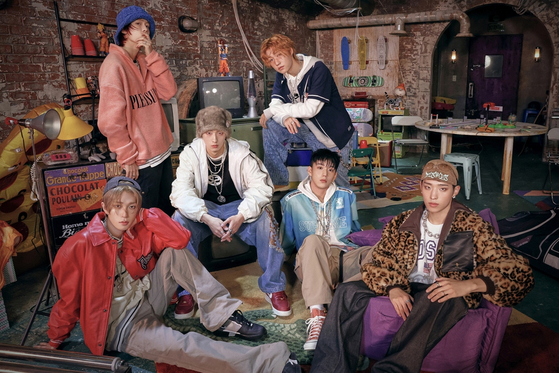 A concept image for P1Harmony’s fifth EP “Harmony : Set In,” which dropped on Nov. 30. [FNC ENTERTAINMENT]


P1Harmony is ready to welcome its boom, the boy band said confidently during Wednesday’s press interview for its new EP “Harmony : Set In,” which dropped the same day.

The six members — Keeho, Theo, Jiung, Intak, Soul and Jongseob — sat down for the interview at the FNC Entertainment building in Gangnam District, southern Seoul to introduce its fifth EP. “Harmony : Set In” is its third release in 2022, which was a prolific year for the band.

“This is the first time we’ve had three comebacks in one year,” said Jiung. “We’re so glad and excited that we’re able to show fans a lot of things this year. Our satisfaction regarding the music, performance and styling for this EP is at an all-time high.”

“I think a phrase about us we’ve been hearing often this year is that ‘P1Harmony’s boom is coming,'” said Intak. “More people are getting to know us, and we’re about to show what we’re best at through our new lead track ‘Back Down.’ I do wish the phrase quickly becomes ‘P1Harmony’s boom has come.'”


The band also discussed the music video for “Back Down,” which had just dropped at midnight. The music video is full of cartoonish pop-art imagery, set against punk backdrops reminiscent of New York City subway and alleys.

“We didn’t get to decide the visual aspects of this EP, but we did a lot of research about how we can express that cartoonish feeling,” said Jiung. “We made sure to make much more exaggerated facial expressions and gestures in the video.”

‘It was actually really fun and easy to get immersed in the concept while filming the music video and album cover,” Keeho said. “There were largely three visual themes, and each of them were so different. All of the outfits were so different that every time we changed, it felt like becoming a new character. The first one is Techwear, second is sleek, fitted suits and the third was young streetwear you would’ve seen on the New York City subway in the 2000s. I felt like I was acting out multiple different roles.” 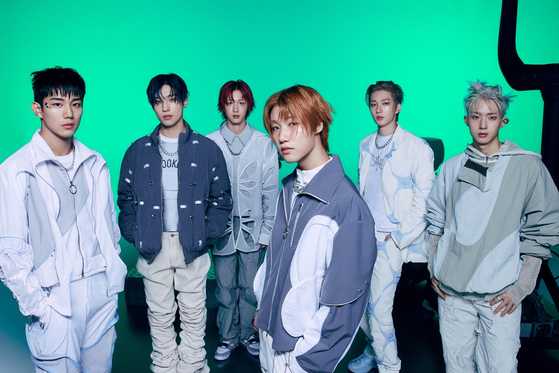 
Since debuting in October 2020, P1Harmony is known for its songs championing confidence, as seen in their previous lead tracks like “Scared” (2021) and “Do It Like This” (2022). It is also known for delivering powerful stage performances to match its music.

In “Back Down,” P1Harmony tells listeners to never be scared or step back when faced with adversity, but instead join forces together to overcome and go forward. The hip-hop number showcases a balance of P1Harmony members’ vocals and rap skills, with a strong beat persisting throughout the rock-infused track.

Intak and Jongseob participated in writing the lyrics of all the tracks on the new EP, while member Jiung took part in writing the music and lyrics for the new track “Better Together.”

“The EP contains a variety of genres, from rock to cute tracks like ‘BFF (Best Friends Forever),'” said Jongseob. “We thought the most important thing was to write lyrics that match the vibe of the song, and it’s where we put the most effort in. Each track has very distinct elements.”

“For me, it was how I can make this EP different from our previous one,” Intak said. “I really focused on writing rap flows that can appeal to the public; catchy rather than convoluted. I also tried to add different vocal textures and sounds in my ad lips. In the rock number ‘Look At Me Now,’ it will be fun to listen to my husky ad libs.” 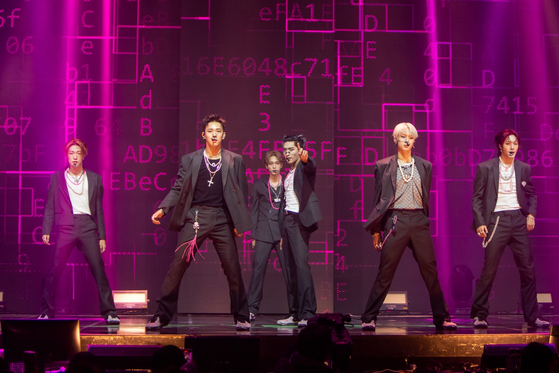 
Members emphasized that the non-lead tracks are hidden gems worth listening to. Soul and Theo each chose “Better Together” and “Look At Me Now” as their favorite non-lead numbers.

“I’m a foreigner, so I still struggle with big words in Korean,” said Soul, who is Japanese. “‘Better Together” is not only easy to listen to, but also has simple lyrics that I can relate to.”

“I’m the type of singer who prioritizes live performances,” Theo said. “When I first heard ‘Look At Me Now,’ I thought it’s the perfect number to perform at a concert. It really shows what P1Harmony is all about, and will highlight our best qualities on stage.”

Members say they plan to release a entirely self-produced full-length album in the future, an idea which their agency FNC Entertainment has been supporting by giving them ample opportunities to write their own music and lyrics.

The band, which has presented relatively experimental sounds so far, seemed determined to up the ante with its new release.

“It’s an aspect that we are always pondering on,” said Jongseob. “We have our own fictional universe to adhere to, and we try to incorporate that into the lyrics. But our songs don’t necessarily require knowledge about our world view in order to understand. The tracks are enjoyable on their own and lyrics aren’t that convoluted. I think ‘Back Down’ is also a number that the general public can enjoy lightheartedly.”

“Connecting our world view and lyrics, with the music in mind, is often tricky,” said Intalk. “But our main focus is how we can show our charms through the music itself. I try to write rap lyrics that flow in a way that’s comfortable for the general public to listen to. I hope a lot of people find the appeal.”

“We’re always working on that balance between public appeal and our unique style,” added Keeho. “I think it will be an ever-going process.” 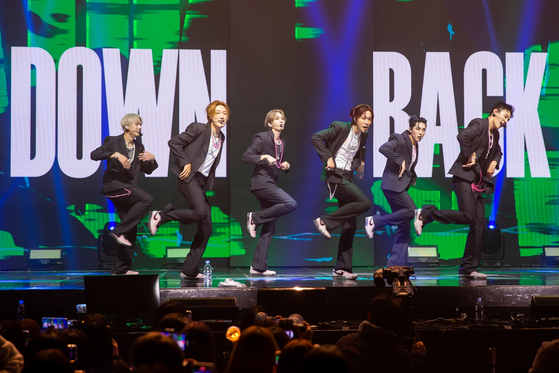 
P1Harmony’s previous EP “Harmony : Zero In,” released in July, surpassed 100,000 copies in sales for the first time in the band’s career. Members say that pressure regarding how the next release performs is inevitable, but they’ve learned how to transform it into a positive energy.

“I talked about this while eating dinner with Keeho yesterday,” Jiung said. “Keeho said that commercial performance is important, of course, but so is the fact that we love the music we’re doing, and that we’re able to be where we are now — able to perform on stage and return the love sent from our fans. And that’s enough. We do feel pressure, but we’ve let it go a lot, and prioritize being grateful and enjoying ourselves.”

“We feel like we have to do better than the previous release, and then do better than now in our next release,” Keeho said. “We think constantly about how we can improve and grow. To be honest, there are a lot of moments when I feel ‘I could’ve done better’ after a stage performance or recording. But I think that feeling is what makes us keep growing, by driving us to indeed do better next time.”

P1Harmony has also stepped up its promotions in and out of Korea — appearing on the “Kelly Clarkson Show” on NBC on Tuesday, releasing the online game “P1us World” inspired by the boy band and running a pop-up store themed after the new EP at The Hyundai Seoul department store in western Seoul’s Yeouido.

“We were so surprised when we heard we were to perform on a show that gets aired to the entire United States,'” Jiung said. “Feeling a lot of pressure, we really tried to make every movement count while performing. We hope more people got to know us, and that we also get to do a talk session in the future.” 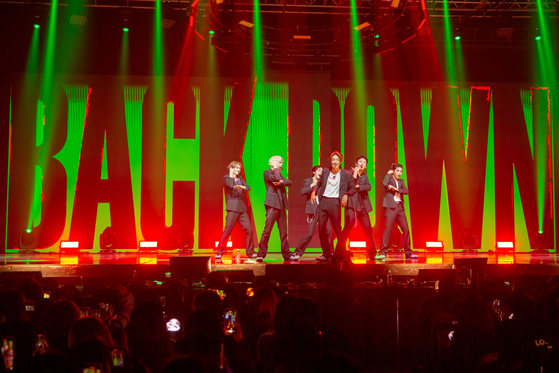 “We were chaotically busy working in 2022,” said Jongseob. “Three EPs, tours in the United Kingdom, Australia, Abu Dhabi, Saudi Arabia and more; we were able to grow so much, especially in terms of learning how to entertain the crowd at a show. We’ll demonstrate that during our tour next year.”

“Resting is good too,” Jongseob continued. “But I’m glad we had a busy year. Even when we get days off, we actually don’t do much. So we end up coming to the studio anyway and write down lyrics non-stop.”

“Next year’s tour will feature more songs than last year’s,” said Keeho. “With the extra-long setlist, we want to present completely new arrangements of our songs. I hope you stay excited for that!” 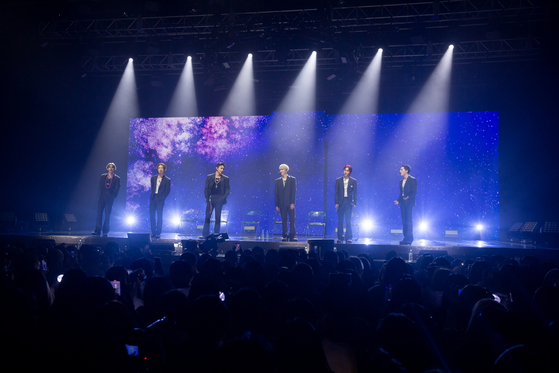