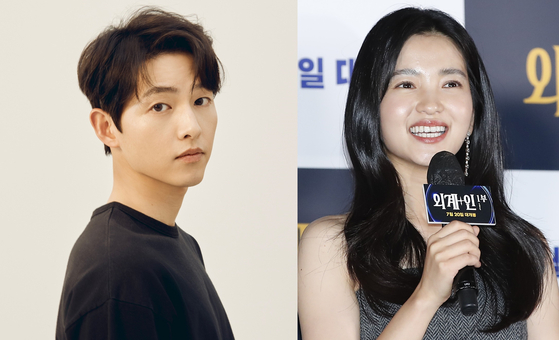 Actors Song Joong-ki, left, and Kim Tae-ri were embroiled in rumors of a romantic relationship that were cut short on Saturday as the actors’ agencies strongly denied the claims. [HIGH ZIUM STUDIO, NEWS1]


Rumors that actors Song Joong-ki, 32, and Kim Tae-ri, 32, were dating were shot down on Saturday as the actors’ agencies strongly denied them.

The rumors arose on Oct. 24 from a video claiming to have caught Kim and Song on film on a romantic trip to Paris, France.

However, the subjects in the video were actually actors Hyun Bin and Son Ye-jin, and the clip was comprised of a series of images shot by paparazzi during the newlywed’s honeymoon to France in April.

Though the claims of the video were blatantly false, the clip went viral, recording over 540,000 views in five days.

Kim and Song worked together in a sci-fi Netflix film “Space Sweepers” which was released in February last year.

Kim began her career acting in plays and was active on stage and in several short films until she was cast as Sook-hee in director Park Chan-wook’s “The Handmaiden” in December 2014. Since then, the actor has appeared in an array of successful or highly-praised works such as films “1987: When the Day Comes” (2017), “Little Forest” (2018), “Space Sweepers” (2021) and tvN drama series “Mr. Sunshine” (2018).

He is set to star in the JTBC drama “The Youngest Son of a Conglomerate” which will be released Nov. 18, and is currently shooting an upcoming film noir “Hwaran.”