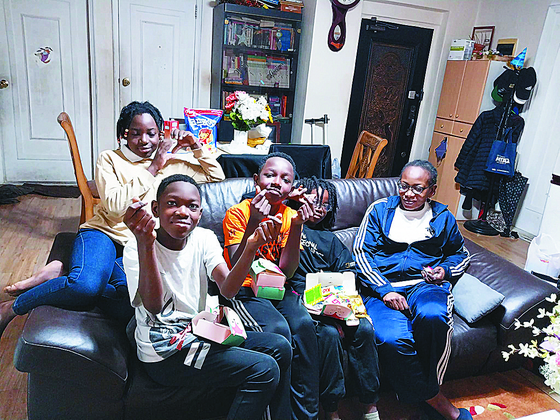 The Lulendo family holds boxes of letters and snacks offered by elementary school students from a nearby church on Monday at their home in Ansan, Gyeonggi. The father, Nkuka Lulendo, is in Congo receiving traditional healing practices from his mother for physical pain. [HONG JOO-MIN]

It was finally over. After a nearly one-year battle with Korean customs and immigration authorities and two years of waiting for a refugee status, Nkuka Lulendo and his family were finally approved.

Lulendo, his wife and four kids, all of whom fled Angola in December 2018 to escape persecution for their Congolese background, landed in Korea for a better – and safer – life, only to be rejected entry at Incheon International Airport.

Korean customs officials didn’t buy their story. They assumed the family was here for money and denied them an opportunity to apply for refugee status.

The Lulendo family couldn’t go back and was forced to stay at the airport for 288 days.

Lulendo sued the airport’s immigration chief for not referring his case to the Justice Ministry for a formal review to receive a refugee visa, but a lower court rejected his complaint. That ruling was later overturned by a higher court, which said his case was worthy of a review.

In October 2019, he and his family were finally allowed to leave the airport as they underwent the refugee review process.

It was finally over, they thought – without any clue of the obstacles lying ahead.

One year has passed since Lulendo and his family started a new life as refugees, but it’s been challenging on many different levels, a pastor who is close to the family recently told the JoongAng Ilbo.

The parents have managed to find jobs in Korea and all four kids are enrolled in school, but both Lulendo and his wife are going through an array of physical problems, the pastor said.

Lulendo, who was already suffering from high blood pressure before arriving in Korea, now has higher blood pressure. He also has hepatitis B, and the symptoms are getting worse.

Lulendo’s wife is having problems with her vision, the pastor said, and is on the verge of going blind. Recently, she’s also been dealing with a hernia.

“Lulendo was worried about the hospital bills, so he went back to Congo for a month to receive traditional healing practices from his mother,” said Rev. Hong Joo-min. “While he’s been away, his wife’s symptoms got worse.”

Hong says he thinks the family’s time languishing in the airport took a toll on the parents’ health, and is now urging the local community to help.

On Monday, Hong dropped by the Lulendo family’s home in Ansan, Gyeonggi, to hand a box of 30 handwritten letters and some snacks. They were offered by elementary school students at a nearby church, who heard about their plight.

“We heard how refugees were struggling to get by,” one letter read. “I hope you eat this and get healthy.”
Lulendo’s wife, who can’t speak and write in Korean fluently, asked her kids to write a letter in response.

“My mom and dad were sad, but they are feeling a bit better after receiving your gifts,” Lulendo’s second son wrote.