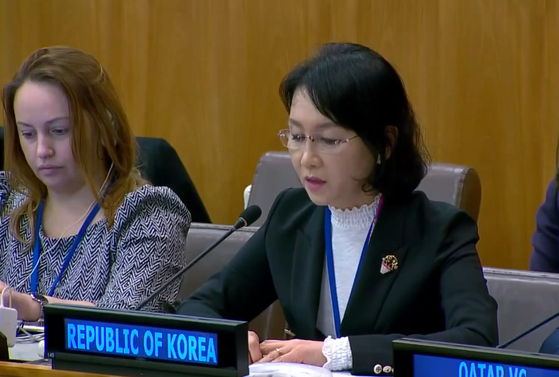 Seoul’s North Korean human rights ambassador raised Pyongyang’s murder of a South Korean fisheries official in the United Nations on Wednesday, as an example of abuses perpetrated by the North.

“Abductions, enforced disappearances [and] prisoners of war continue to be a deep concern and should be addressed immediately,” said Lee Shin-hwa, South Korea’s ambassador for international cooperation on North Korean human rights, during a meeting of the UN General Assembly Third Committee in New York.

“I also deplore the incident of an unarmed civilian of the Republic of Korea [South Korea] killed by DPRK military in the Yellow Sea in September 2020 and urge the DPRK to disclose all relevant information and ensure such events are not repeated.”

DPRK is the acronym for the North’s official name, the Democratic People’s Republic of Korea.

“The international community should make every effort to put an end to human rights abuses in the DPRK,” Lee said.

Lee, a professor of political science and international relations at Korea University, also stressed that Pyongyang’s human rights violations have been “sidelined for decades” while it continues to advance its nuclear and missile programs.

“I thus call for global leaders to step up their efforts to address the DPRK’s human rights issue while sparing no efforts to achieve denuclearization of the DPRK.”

“To achieve this objective,” said Salmon, “I would engage with stakeholders including governments and advocate for exploring all available avenues such as universal jurisdictions in domestic courts to guarantee the victims rise to justice.”

Salmon said she would continue to advocate that the UN Security Council refer the situation to the International Criminal Court.

Lee’s remarks at the UN meeting were the latest evidence that the conservative Yoon Suk-yeol administration is taking a harder stance than its left-leaning predecessor, which largely refrained from criticizing the North for human rights abuses in international settings.

Lee’s position was mostly unfilled for five years under the Moon Jae-in administration.

On Sept. 23, 2020, North Korean soldiers fatally shot a 47-year-old South Korean fisheries official named Lee Dae-jun, who had disappeared while on duty south of Yeonpyeong Island near the Northern Limit Line, the de-facto inter-Korean maritime border in the Yellow Sea, the previous day.

At the time, top security officials in the Moon administration blamed Lee for swimming across the border in a defection attempt.

However, the Ministry of National Defense and Korea Coast Guard reversed their account last June – a month after Yoon was elected into office – saying that there was actually no evidence that Lee had been trying to defect.

The issue has roiled South Korean politics ever since.

Russia continues to look to North Korea for weapons for use in Ukraine: State Dept.