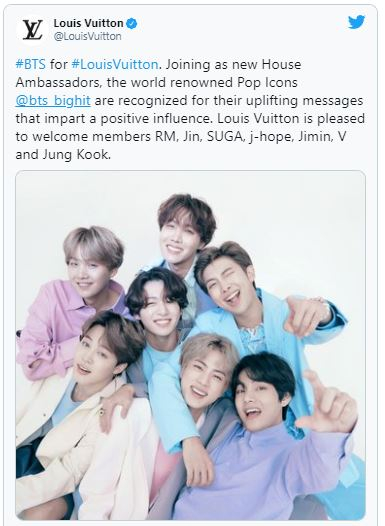 The world can expect to see BTS sporting more Louis Vuitton suits, as the French fashion house announced Friday that the hot K-pop superstars have officially become the latest ambassadors for Louis Vuitton.

The members will be outfitted in Louis Vuitton in upcoming performances and appearances for a number of special projects.

Louis Vuitton’s men’s artistic director Virgil Abloh said in a statement that BTS is “one of the most renowned and influential groups in the world” and that “BTS’ ubiquitous popularity resonates worldwide and Louis Vuitton is very happy to share news of their new role with the House.”

“I am looking forward to this wonderful partnership which adds a modern chapter to the House, merging luxury and contemporary culture. I can’t wait to share all the very exciting projects we are working on,” Abloh added.

The fashion brand also posted a picture on its twitter of the members wearing its latest outfits and recognized the band for their “uplifting messages that impart a positive influence.”