Korean bishop named to head Vatican Congregation for the Clergy 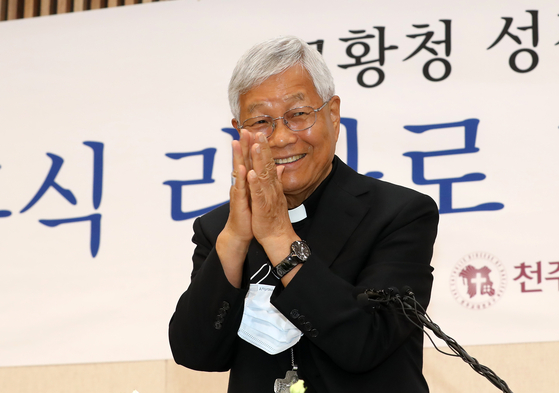 Archbishop Lazzaro You Heung-sik, who was named as the new prefect of the Congregation for the Clergy of the Holy See on Friday, speaks to reporters at a press conference in Daejeon on Saturday that he will make efforts to arrange a visit to North Korea by Pope Francis if he is given a role to do so. [YONHAP]


Pope Francis appointed Korean bishop Lazzaro You Heung-sik as the new prefect of the Congregation for the Clergy, the Vatican said Friday.

You, 69, chief of the diocese of Daejeon, was also promoted to archbishop as he became the first Korean to be appointed to a secretary position.

The congregation is responsible for overseeing matters regarding priests and deacons not belonging to religious orders, as well as seminaries. The office is known for overseeing more than 400,000 priests around the world.

You is known as one of a few Korean priests who have close communications with Pope Francis. They became acquainted during the World Youth Day event in Rio de Janeiro, Brazil, in 2013. The pope visited Korea in 2014 at the invitation of You.

"I will assist Pope Francis well," You said after the appointment. "I will help Catholic priests in the world and manage Catholic seminaries."

You said he was offered the position by the pope when he visited the Vatican in April.

“The Pope has said he wants to go to North Korea," the archbishop said in a press conference on Saturday. "If I am given a role to arrange his visit to North Korea, I'll do my best to carry out my mission."

He said a visit by the Pope would be a good chance for the reclusive country, which has been struggling with international isolation and economic difficulties, to get over the troubles.

Pope Francis has expressed his willingness to visit North Korea several times, saying that he wants to play a role in establishing peace on the Korean Peninsula, where the Korean people have been suffering from the pain of separation for 70 years.

A papal trip to Pyongyang gained traction in 2018 amid a peaceful mood created by three inter-Korean summits and a historic Washington-Pyongyang meeting. But no further progress has been made since a no-deal summit in Hanoi in 2019.

You said his appointment reflects the increased presence of South Korea on the world stage and Pope Francis' attention to the Asian continent. He will be the first South Korean and the second Asian to serve as a prefect in the Holy See.

Moon said in the telegram that You's appointment to a senior Vatican position is good news not only for the Korean Catholic Church but also for the entire nation because it elevated the national status.

"I believe archbishop You will be a light for a world without discrimination and a world where the poor are comforted, like your pastoral motto of 'I'm the light of the world [Lux Mundi].' I also have high expectations because you have made extraordinary efforts for peace on the Korean Peninsula," Moon said.

You plans to head to Rome in late July to take office the following month to replace Italian Cardinal Beniamino Stella.

Born in Nonsan, South Chungcheong, in 1951, You graduated from Pontifical Lateran University in Rome. He was ordained as a priest in 1979 and bishop in 2003.