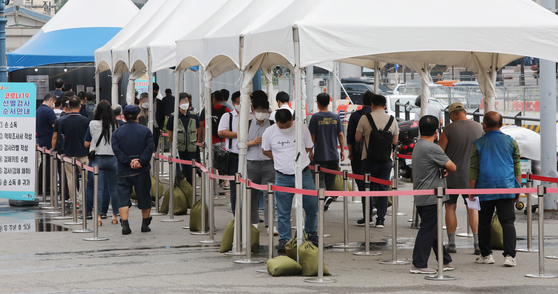 People stand in a long line at a temporary Covid-19 screening center near Seoul Station on Friday. [NEWS1]

The Korean government issued an executive order Friday to secure more hospital beds in areas outside of the Seoul metropolitan area to cope with the continued high number of Covid-19 patients.

The government said it will secure 146 additional I.C.U. beds for critically ill patients in hospitals outside of the capital area. General and university hospitals will be asked to increase the intensive care beds allocated for Covid-19 patients from 1 percent to 1.5 percent.

Another 1,017 beds for patients with less severe symptoms will be secured from 46 hospitals outside of the Seoul area that have between 300 to 700 beds and have not offered Covid-19 treatment.

An executive order was already issued last month on Aug. 13 to secure more hospitals beds for Covid-19 patients in the greater Seoul area, where a majority of the cases are concentrated.

The government is also discussing transitioning to a “home treatment” system for coronavirus patients with milder symptoms rather than the current residential treatment centers. Quarantine authorities are currently discussing such a home-based self-treatment system for those who are asymptomatic or have mild symptoms, as well as children under the age of 12 who are not at risk.

Around 3,000 children and their guardians who got Covid-19 were treated at home since last year, said health officials.

The Central Disaster Management Headquarters also announced Friday that 513 new temporary Covid-19 screening centers have been installed at train stations, bus terminals and rest areas across the country ahead of the Chuseok holiday, which runs from Sept. 18 to 22.

This includes 466 in the metropolitan area, including at Nambu Bus Terminal in Seocho District, southern Seoul, and 47 outside the capital, in locations easily accessible to travelers.

The testing centers will be operated temporarily only through this month and will run through the Chuseok holiday from 10 a.m. to 6 p.m.

Korea reported 1,892 new Covid-19 cases, including 1,857 local infections, raising the total caseload to 269,362, according to the Korea Disease Control and Prevention Agency (KDCA) Friday. There were 35 imported cases.

This marks a slight drop from Wednesday and Thursday, when figures soared above 2,000, and the 66th day Korea has recorded cases in the four-digits.

Of local infections, 74.6 percent of the new domestic transmissions were in the metropolitan area with 666 reported in Seoul, 603 in Gyeonggi and 117 in Incheon. Health officials are concerned that the spike in cases in the capital area could again lead to more transmissions nationwide as people travel back home over Chuseok.

As of Thursday, 62.6 percent of the population has received at least their first vaccine shot.

Health authorities also addressed the issue of some people receiving expired coronavirus vaccine doses, putting into place more stringent measures for medical staff to check and make transparent expiry dates. Individuals who have received an expired dose will be able to receive another shot.

“While the number of confirmed cases outside the metropolitan area has decreased somewhat, the infections in the Seoul metropolitan area is spreading again,” Prime Minister Kim Boo-kyum said in a meeting of the Central Disaster and Safety Countermeasures Headquarters Friday.

Health authorities decided to extend the current Level 4 social distancing measures in the greater Seoul area, the highest in a four-tier system, and Level 3 in other regions, through Oct. 3. Some restrictions on private gatherings have been relaxed to allow up to six people to gather if the group includes at least two vaccinated individuals before 6 p.m. and four fully vaccinated people after 6 p.m.

Kim stressed that the slightly adjusted social distancing restrictions last week “does not indicate an easing of measures,” stressing that the fourth wave is far from over.

“Like during the holiday season, if a vicious cycle of local infections occurs again over Chuseok, the fourth wave may become longer and more serious,” he added.