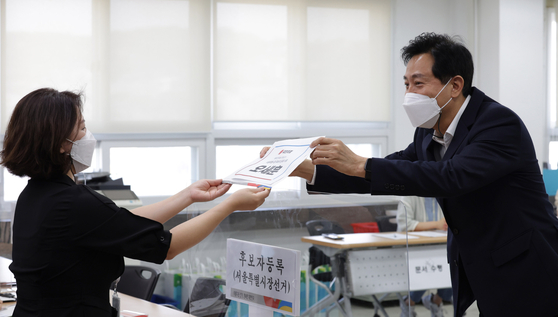 The National Election Commission (NEC) began accepting candidate registrations Thursday for elections to be held just 22 days after the start of the Yoon Suk-yeol administration.

The official campaign period runs from May 19 to 31. During it, candidates can actively use campaign vehicles, send notices, advertise in newspapers and TV and hang election posters and banners. Early voting will be held May 27 and 28.

"The local elections will be a choice between once more trusting talented workers and leaping into the future, overcoming the lost decade," Oh said in a press conference, "or following the path of the past again with those who are responsible for the original sin of the lost decade."

If Oh is re-elected, he will become the first person to serve a fourth term as Seoul mayor. Oh served two terms as Seoul mayor from 2006 to 2010. He returned to the job by winning a by-election in April 2021. The position was left vacant after Seoul Mayor Park Won-soon committed suicide in July 2020 after his former secretary accused him of sexual harassment. 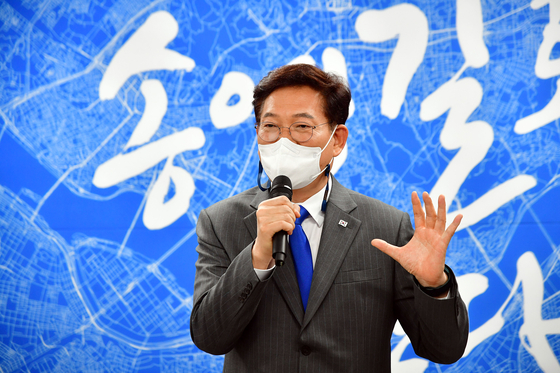 Song Young-gil, the Democratic Party’s Seoul mayoral candidate, speaks at a ceremony for volunteers at his campaign office in Jung District, central Seoul, Thursday. [JOINT PRESS CORPS]
Song Young-gil, former chairman of the Democratic Party (DP) and ex-mayor of Incheon, will compete against Oh. Song, who also represented Incheon's Gyeyang-Bdistrict in the National Assembly, moved to Songpa District in eastern Seoul at the beginning of April, when he announced his Seoul mayoral bid.

For the Gyeonggi governorship, the PPP candidate is Kim Eun-hye, a spokesman for Yoon during the transition period. He is running against the DP's Kim Dong-yeon, a former finance minister and a presidential hopeful who dropped out of the March 9 race to support Lee Jae-myung.

These two races are the most interesting among 17 metropolitan and gubernatorial posts being contested. The local election will also be an early political test of the new Yoon government. 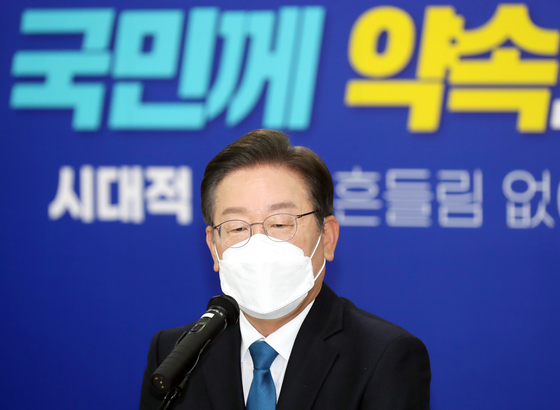 Lee Jae-myung, defeated presidential candidate of the Democratic Party, speaks at a press conference in Incheon, where he will be running for a parliamentary seat for the Gyeyang-B district in the upcoming by-elections. [YONHAP]
Lee Jae-myung, who lost the presidency to Yoon in March, and Ahn Cheol-soo, Yoon's transition team chairman, will be running for parliamentary seats.

Lee, a former governor of Gyeonggi and special adviser to the DP, lost to Yoon by 0.73 percentage points in the March 9 presidential election. He is running for a seat in Incheon's Gyeyang-B district.

On Thursday afternoon, Lee held a press conference in Incheon, "The upcoming elections are not about picking 'talkers' but about selecting 'workers.'"

He added, "I think Incheon is a city with great potential. If given the opportunity, I would like to develop Gyeyang into the No. 1 economy from the perspective of a politician with a little more influence."

Ahn dropped out of the March presidential race at the last minute to support Yoon and merged his People's Party with the PPP last month. He will run for a seat from Bundang-A district in Seongnam, Gyeonggi.

Ahn completed his candidacy registration in Bundang and told reporters afterwards, "The local elections are very important for the success of the new government. Thus, I want to add even a small amount of strength to win the election here in Gyeonggi, including this district."

Both Lee and Ahn are expected to run again for president. 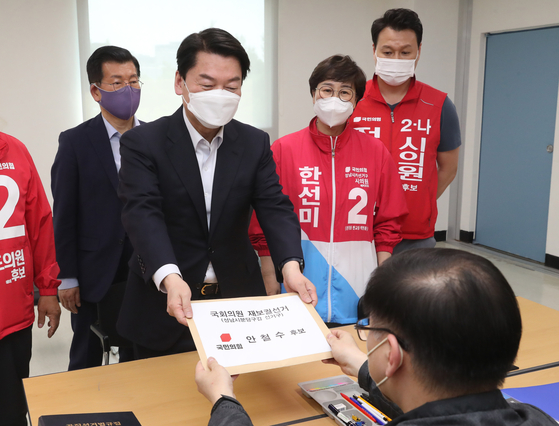 The seats were left vacant after lawmakers stepped down to run for governor or mayor.

Candidates in local elections must have registered as a resident in the jurisdiction for at least 60 days as of election day.

With the June 1 local elections, the PPP is hoping to stabilize management of state affairs in the early days of the new Yoon administration. Its rival DP has a supermajority of 168 out of 300 seats in the National Assembly, while Yoon's PPP holds 109 seats.

In turn, the DP hopes to make a political comeback after its narrow presidential election defeat in March.