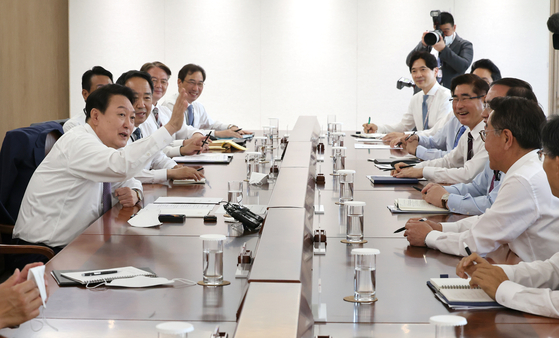 President Yoon Suk-yeol speaks at his first meeting with senior presidential secretaries at the presidential office in Yongsan District, central Seoul Wednesday, with jackets off for a more casual look. [YONHAP]
President Yoon Suk-yeol called on his aides to monitor the impact of a possible North Korean nuclear test on security and state affairs in his first meeting with senior secretaries Wednesday.

Kicking off a busy second day in office, Yoon held the meeting with senior presidential secretaries at his new office in the Defense Ministry compound in Yongsan District, central Seoul, and discussed security and economic challenges.

"The current security situation is tough," said Yoon. "There's talk of a resumption of [North Korea's] nuclear tests, and foreign countries are concerned. In case such a situation occurs, you will have to closely monitor and prepare for not only how it affects security but other areas of state affairs."

Analysts have said that North Korea could also be preparing a seventh nuclear test, possibly around U.S. President Joe Biden's visit to Seoul next week for a summit with Yoon scheduled for May 21.

On the same day, Yoon's Defense Minister Lee Jong-sup called for a "stern and immediate" response in case of a "direct provocation" from Pyongyang.

Newly inaugurated Lee, a retired three-star general and former vice chairman of the Joint Chiefs of Staff (JCS), made the remarks in his first meeting with top military brass under the Yoon administration to evaluate North Korean trends and review the South's readiness posture. Attendees included the JCS chief and commander-level officials.

They evaluated North Korea's recent missile provocations, including its ICBM and submarine-launched ballistic missile (SLBM) launches, as well as signs of preparations for a nuclear test at the Punggye-ri nuclear test site North Hamgyong Province.

"The security situation on the Korean Peninsula, including the advancement of North Korea's missile threat and the possibility of a nuclear test, is very serious," said Lee, according to his ministry. "We must maintain a firm readiness posture in the domains of land, sea and air to proactively respond to security threats from all directions."

He continued, "If North Korea carries out a direct provocation, we will respond sternly and immediately, according to the rights to self-defense."

The South Korean three-axis system was a term abandoned by the Moon Jae-in administration and revived by Yoon during his presidential campaign. It refers to three defenses against North Korean nuclear and missile threats: a Kill Chain pre-emptive strike system, Korean Air and Missile Defense system and Korea Massive Punishment and Retaliation plan.

Yoon was sworn in as Korean president in a ceremony Tuesday attended by some 41,000 people including former presidents and foreign dignitaries.

In an inaugural address, Yoon promised North Korea an "audacious plan" to help its economy in exchange for progress towards its "complete denuclearization."

Starting his second day in office Wednesday morning, Yoon arrived at the presidential compound by motorcade at around 8:30 a.m. after a 12-minute commute from his residence in Seocho District, southern Seoul. He will be commuting to work in this fashion for the next month or so until the foreign ministers' residence is remodeled into a new presidential residence in Hannam-dong, near the Defense Ministry compound.

He is working from a temporary presidential office on the fifth floor of the Defense Ministry main building, while his permanent office is remodeled on the second floor.

Yoon has pushed for a "free" and open communications style, modeled after the White House. His aides were urged to remove their jackets to appear more casual at their first meeting.

To a Japanese parliamentary delegation led by Fukushiro Nukaga, a member of the Liberal Democratic Party and chairman of the Japan-Korea Parliamentarians' Union, Yoon said, "It is in the common interest of the two countries to restore and improve the stagnant Korea-Japan relations as soon as possible."

Yoon stressed that Japan is South Korea's "closest neighbor and a major cooperative partner that shares liberal democratic values and a market economy," adding that he looks forward to "opening new horizons in our cooperative relationship."

Yoon noted that Touader's visit was the first by the Central African Republic's president to Seoul in 20 years.

He also held a group meeting with delegates from Qatar, Nigeria, Ecuador and Mongolia.

Yoon later attended a reception for overseas Koreans at the Lotte Hotel in Sogong-dong, central Seoul.