New gov't gets to grips with pandemic issues 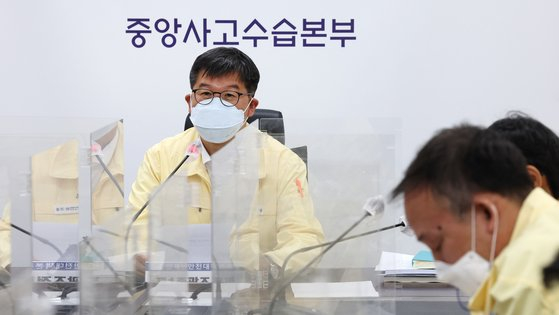 Lee Ki-il, the second vice minister of the Ministry of Health and Welfare, makes remarks during a meeting of Central Disaster and Safety Countermeasures Headquarters held at the Sejong Government Complex Wednesday. [YONHAP]

Previously, first and second shots could be taken at any time after recovery. But after having Covid-19, the body has natural immunity for some time, although how long has not been determined.

“The duration of natural immunity is not certain, but it is estimated to be around three months,” said Koh Jae-young, head of the crisis communication team at the Central Disaster and Safety Countermeasures Headquarters, on Thursday.

“We will closely examine and evaluate the four-week transition period that started on April 25 with experts,” said Lee Ki-il, the second vice minister of the Ministry of Health and Welfare, during the general remarks at the Central Disaster and Safety Countermeasures Headquarters meeting Wednesday. “Next week, after a comprehensive evaluation, we plan to discuss the timing for entering a period of full normalcy.”

On April 25, the infectious disease classification of Covid-19 was downgraded to Class 2, but the government decided to maintain the seven-day quarantine obligation for confirmed patients with a one-month grace period.

“With our current medical system and quarantine response capabilities, we conclude we can provide optimal treatment without any major problems as long as the average number of confirmed cases is less than 100,000 per day,” continued Lee.

After social distancing restrictions were lifted, the movement of people around the country has increased compared to before the pandemic. According to an analysis of mobile phone movement data provided by the Ministry of Health and Welfare, individual journeys amounted to 28.25 million last week.

In 2019, before the outbreak of the pandemic, the number of individual journeys during the same period was 20.95 million. Since the lifting of social distancing restrictions on April 18, the movements have steadily increased every week.