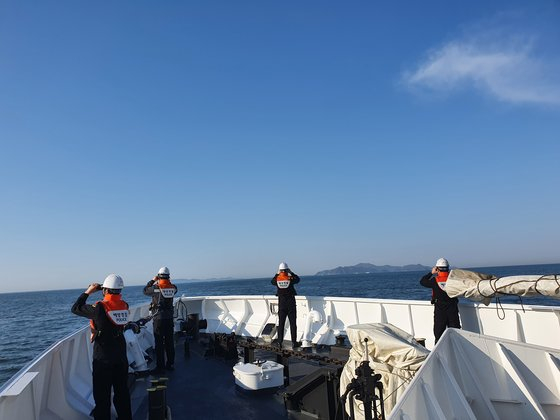 The Incheon Coast Guard searches for a missing captain and crewmember of a ship near Baengnyeong Island. [INCHEON COAST GUARD]

An empty ship was found drifting near the Northern Limit Line (NLL), the de facto maritime boarder with North Korea, and the captain and his sole crew member are missing.

There were no signs of foul play or abduction by North Korea, and the Coast Guard suspects the captain and crew member might have fallen into the sea during a maintenance activity.

The fishing boat departed from Janchon Port in Baengnyeong Island around 1:55 p.m. on May 2. On board was the captain, a man in his 60s, and one crew member, an Indonesian man in his 30s, whose names were not disclosed. The captain reported to the Coast Guard in Baengnyeong Island before departure that two people were on the ship, and CCTVs around the port showed the two men boarding.

Around 5:30 p.m. the same day, a report was filed with the Coast Guard that a 4.97-ton fishing boat was drifting 3.7 kilometers north of Baengnyeong Island. The Navy reported it while patrolling near the Northern Limit Line (NLL) in the Yellow Sea.

The Coast Guard arrived at the scene and boarded the ship but the captain and crewman were nowhere to be seen. The Coast Guard moved the ship to Baengnyeong Island, while mobilizing security vessels to search nearby waters.

The captain reportedly told acquaintances that he was “going to work on the anchors.” This is a process of dropping an anchor in various parts of the sea to mark fishing grounds before fishing boats cast their nets. Nets used for fishing were found inside the ship. The Coast Guard is checking how many nets were loaded on the boat before departure.

At the time of the ship’s departure, the sea around Baengnyeong Island was calm, with wind speeds of four to eight milliseconds and wave heights of 0.5 meters. The weather was clear. There was no possibility of a water accident, such as being swept away by high waves or having collided with another ship due to fog. There were also no signs of damage or flooding on the ship.

The Coast Guard suspects the captain and crew member may have stumbled while moving the anchor. More than two people are needed to move an anchor, and there is a possibility that one of the men fell into the sea while trying to move the anchor, and the other jumped in to save him.

However, the captain is a veteran fisherman who has been fishing off Baengnyeong Island for a long time. Even though two men are often needed for the job of moving an anchor, a skilled sailor can do the work alone.

“If the list of crew members change, they should report it immediately,” a Coast Guard official said. “But they don’t seem to have done so in this case.” The Coast Guard is investigating the identity of the Indonesian crew member and when he started working on the ship.

The Coast Guard is conducting forensic work on the captain’s and crew member’s phones. In addition, as the ship was found near the NLL, the Ministry of Unification has informed North Korea of their disappearance, as it is possible that the men have floated into North Korean waters.

“After examining past records, it was confirmed that this ship mainly operated south of Baengnyeong Island,” the Coast Guard official said. “After the disappearance of the captain and crew, the ship seems to have drifted into the vicinity of the NLL in the northern part of Baengnyeong Island, riding on currents.” This explanation rules out the possibility of defection to North Korea.

The Coast Guard is mobilizing about 10 ships, including a Coast Guard patrol boat, to search for the missing men.