U.S. 'second gentleman' gets a kick out of Seoul 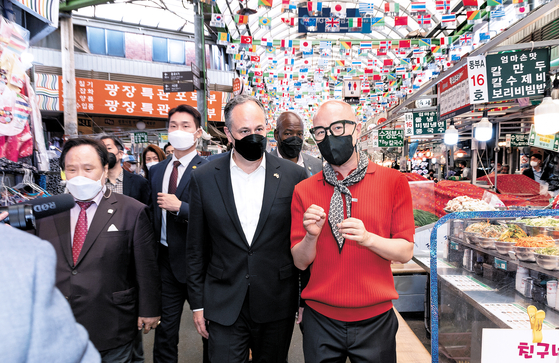 "The outgoing President Moon Jae-in and the new President Yoon Suk-yeol shaking hands during the inauguration as the whole world was watching was really impactful. I was honored to watch the scene," said Douglas Emhoff, husband of U.S. Vice President Kamala Harris, the first "second gentleman" of the United States, in an exclusive interview with the JoongAng Ilbo.

U.S. President Joe Biden chose Emhoff to deliver a personal letter to Korean President Yoon Suk-yeol for the inauguration. Emhoff was the first foreign dignitary to visit the presidential office in Yongsan District, central Seoul, Tuesday. The JoongAng Ilbo was the only domestic news outlet to interview Emhoff. The interview was conducted over a course of a day at the U.S. Embassy residence, Habib House.

Emhoff, described by CNN as the “Best 21-century husband,” spoke frankly about gender equality and criticisms of Vice President Harris.

On Tuesday, after visiting the Korean War Memorial in the morning, Emhoff met with members of the U.S. army in Korea and their relatives at the embassy residence. After that, he went to Gwangjang Market to sample its famous food with television personality and restaurateur Hong Seok-cheon, then strolled along nearby Cheonggyecheon Stream to greet passersby.

Security was strict, but the second gentleman maintained his easygoing smile. “He seems like the kind of person who would go to a high-end restaurant but it was nice to see him at the market,” said Cha Hong-gyu, a 70-year-old Seoulite who ate bindaetteok at the same restaurant as Emhoff. “I saw the good side of America in him.”

“Every time a new dish such as kimbap came out, he was curious and delighted, and he was always considerate of the people next to him,” said Hong Seok-cheon. Looking at a previous JoongAng Ilbo article about him from the Dec. 29, 2020 edition, Emhoff said, “I can’t read Korean yet, but the photo is my favorite so I’m glad.”

The following are edited excerpts of conversations with Emhoff.


Q. What were your first impressions of Korea, and were there any memorable moments so far?

A. It was an incredible day and a half. It feels like we’ve been here a week. We’ve put a lot of events into a short amount of time so it has made it really impactful. One, to have had the president of United States ask me to lead the United States delegation to the inauguration of your new president is quite the honor. And two, to see new President Yoon and former President Moon shake hands in front of your entire country and the world, to show that peaceful transfer of power, that to me was so impactful. And it's such a great visual for the world when democracies are under attack all over the world, to have your country show the world how it's done. Also, I was at the Korean War Memorial, and to see how our countries came together all those years ago and are still so close was meaningful. And the real message of this trip and certainly President Biden's upcoming trip is to strengthen an already strong relationship and bring it into the future even closer.


What left an impression on you during your trip?

The food and the culture were impressive. We also got to visit Netflix Korea, and to see all the great things they're doing and to experience the local cuisine in the market was enjoyable. And coming from Los Angeles, I'm already very steeped in Korean culture and Korean food and, and I love kimchi. So I've had it double portions at every single meal since I've been here.


You must feel pressure as the first-ever "second gentleman."

This is my third international trip and all have been incredibly memorable, and have stayed with me. I talk about them within the administration and to the people I meet. The world takes notice when I'm on international trips. The folks in the embassy, they take notice of the trips that are made to other countries. And so being able to come here to the embassy and speak to the folks who have dedicated their lives to public service and in service of their country, our military, and also the spouses and the families who support them, that's the stuff that I'll never forget. And I get almost emotional talking to them and thinking about it because of all the dedication and sacrifice that they have made, not just related to Korea, but also during the trips I made in the first months of the administration over 30 states.


Was there a little bit of frustration for you to have to give up your career as a lawyer?

No frustration at all. It’s an honor. I love my wife. I love my country. Sometimes I say, 'I did this for love and country.' But I also love my career. I did it for 30 years. I humbly say I was very good at it and I was successful. And I think for all people in careers, you have to really love what you do. And if you love what you do, you're going to get a lot out of it. And I really loved being a lawyer, but when this opportunity came up, there was not even a question that I was going to take a step back so my wife can become the first woman vice president and do everything I can to help her succeed.


That is a ringing message, not just for those in the U.S. but also in Korea.

Lifting women up so that they can carry out important roles is a very manly thing. It’s also good for economic growth, to lift women up so that they can do their jobs. That is not taking away opportunities from men, but men and women growing [at the same time]. I also want to say that Vice President Harris lifts me up and helps me with my duties. We help each other. She was also very proud that President Biden chose me to lead the U.S. delegation to your inauguration this time.


Gender equality has become a somewhat sensitive topic in Korea these days. Do you have a message for the men and women of Korea?

I have spoken very publicly and loudly about equity and gender equity in particular, and how important it is for men to lift up women and not keep them down. It is not only a question of fairness. It's a question of equality, but it's also good for men. Women succeeding doesn't mean men don't succeed. Women succeeding means women are succeeding and men can also succeed. And I would also argue that when we lift up women, we lift up our entire economy and we lift up the organizations in which we work, whether it's a business, government, education or military, whatever organization you're in. So it's a false choice to suggest that by women succeeding, a man is missing out.

I think men all over the world need to understand that. And by lifting up women, they're going to lift up everyone including themselves and create more opportunity for everyone. I would also say working for the first woman vice president in the United States, and being married to her, it helps our entire administration. I was just here at the embassy meeting, the folks that work here and the women in the military, all coming up to me, some with tears in their eyes, grabbing my hand, telling me to make sure I tell her what she means to them. The fact that my wife was able to go from district attorney to attorney general to Senator, to now vice president of the United States of America, shows women all across our country, but all across the world, what is possible. And this representation, it matters.


There is still a lot of criticism of the Vice President. What is your take on this?

We say it comes with the territory. It’s part of being in politics. It's part of taking on a leadership role, but she's tough. She's strong. And nothing affects her. And as I mentioned, she was an elected district attorney of San Francisco, an elected attorney general of the biggest state in the union, in California, elected United States Senator now elected Vice President. So she doesn't have time to focus on anything other than working for the American people, period.


What message would you like to send to Korean readers?

So first of all, my message is what I shared with President Yoon yesterday in anticipation of President Biden's visit, to reiterate how important the relationship is between the United States and Korea and how we are all looking forward to the new administration here and our administration moving forward together. We are so closely aligned in all aspects. It’s a very unique, exciting and interesting time for both of our countries. And the fact that the president is coming here, and speaking here, shows how much the United States values this relationship. And I feel very fortunate to be a part of that. And I can't wait to come back and build upon the relationships that I've personally made just in this brief time I've been here.