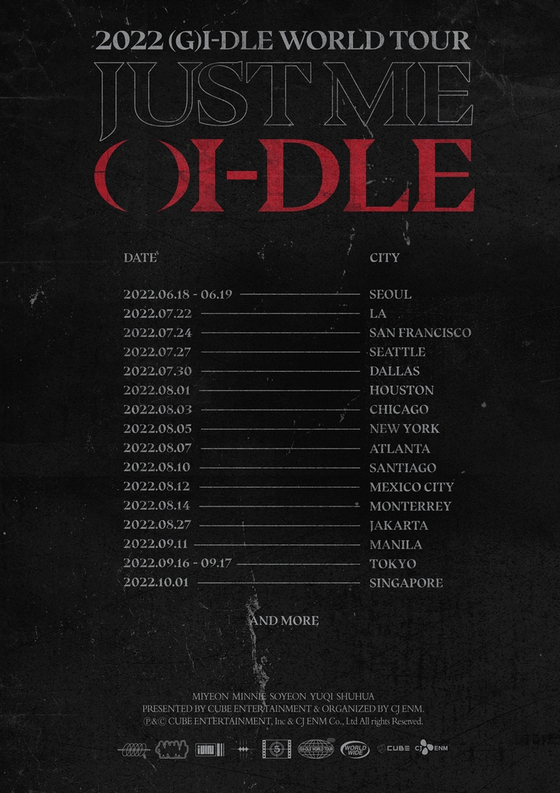 Girl group (G)I-DLE will stop in 16 cities on its first world tour “Just Me ()I-DLE” starting in Seoul next month, its agency Cube Entertainment announced Thursday.

Then from July, the group will move on to Los Angeles, San Francisco, Seattle, Dallas, Houston, Chicago, New York and Atlanta in the United States, Santiago in Chile, Mexico City and Monterrey in Mexico, Jakarta and Manila in the Philippines, Tokyo and Singapore.

The group had planned to tour in 2020, but failed due to the Covid-19 pandemic.

Debuting in May 2018 with its first EP “I Am,” (G)I-DLE stand out as leader Soyeon directly participates in making most of its music. Before debuting as part of (G)-IDLE, Soyeon caught the eye of the public through her appearances in hip-hop competition show “Unpretty Rapstar” (2015) and hit audition show “Produce 101” (2016), both aired on Mnet.

The group’s first full-length album “I Never Die,” which dropped in March, topped the iTunes Top Albums chart in 24 regions and the K-pop Top Albums chart in 11 countries. Its lead track “Tomboy” placed at No. 34 on the Billboard Global Excl. U.S. chart.