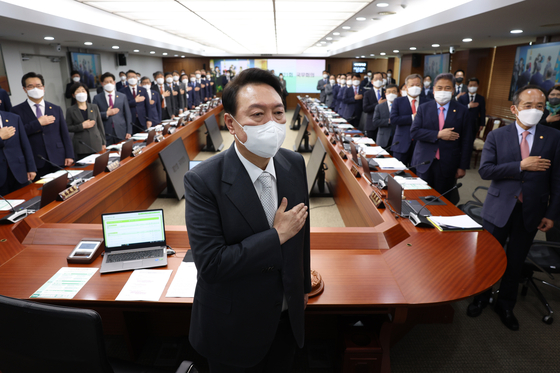 With Yoon's appointments of Minister of Foreign Affairs Park Jin and Minister of Interior and Safety Lee Sang-min, nine out of 18 minister positions are filled and sworn in. Technically, a majority, or 11 Cabinet members out of 20, are needed to meet the quorum to convene a Cabinet meeting. A complete Cabinet includes 18 ministers, prime minister and the president.

Yoon presided over his first Cabinet meeting at 3 p.m. at his new presidential office in the old Defense Ministry building in Yongsan District, central Seoul, to approve of a 59.4 trillion-won ($47 billion) supplementary budget to support small merchants hurt by the Covid-19 pandemic.

"Today's Cabinet meeting is meaningful in that it is the first to herald the Yongsan era," said Kang In-sun, the presidential spokesperson, in a briefing. She added a larger Cabinet meeting will be held at the Sejong government complex once Yoon's Cabinet is completed.

"This Cabinet meeting was held, reflecting the president's work-style and he will keep to his promises as soon as possible without being bound by a formal framework or an existing schedule," said Kang.

Despite not all ministers being appointed yet, Kang said that Yoon's Cabinet members "made quick decisions based on pragmatism and with the cooperation of ministers from the previous government."

She added, "President Yoon reiterated his will to operate Cabinet meetings as a forum for open and candid discussion rather than a formal meeting to simply pass agendas." 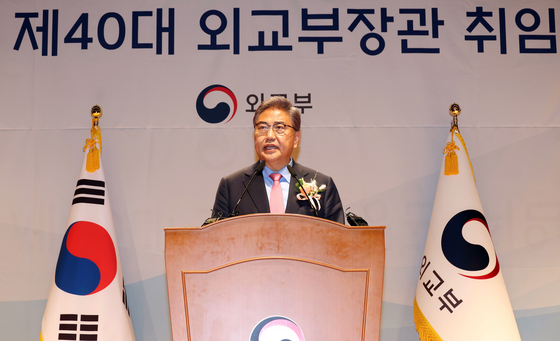 New Minister of Foreign Affairs Park Jin speaks at his inauguration ceremony at the government building in Jongno District, central Seoul, Thursday. [JOINT PRESS CORPS]
Foreign Minister Park, a fourth-term lawmaker from the People Power Party (PPP), is a Korea-U.S. relations expert and a diplomat-turned-politician who has extensive experience in parliamentary diplomacy.

Interior Minister Lee is a former judge who served as vice head of the Anti-Corruption and Civil Rights Commission.

The National Assembly later Thursday adopted confirmation reports for Lee Chang-yang, the minister for trade, industry and energy nominee, and Lee Young, the minister of SMEs and startups nominee. Yoon is expected to appoint them soon.

The appointment of a foreign minister is especially important for Yoon with U.S. President Joe Biden set to arrive in Seoul next week for a summit on May 21.

Biden is expected to visit Seoul from May 20 to 22, his first trip to Asia since taking office in January 2021. The Seoul stop comes ahead of a visit to Tokyo for a Quadrilateral Security Dialogue, or Quad, meeting.

Park led Yoon's policy consultation delegation to Washington in April and delivered a personal letter for Biden to the White House security adviser. As a lawmaker, Park, who was chair of the parliamentary foreign affairs committee, met with Biden, who was a Delaware senator, in a visit to Washington in 2008.

The virtual Covid-19 Summit will be co-hosted by the United States, Belize, Germany, Indonesia and Senegal. It will be joined by partner countries including Korea, Japan, India and New Zealand, nongovernmental organizations and private sector companies, to discuss Covid-19 vaccinations, expanding treatment and enhancing pandemic preparedness, said Yoon's office.