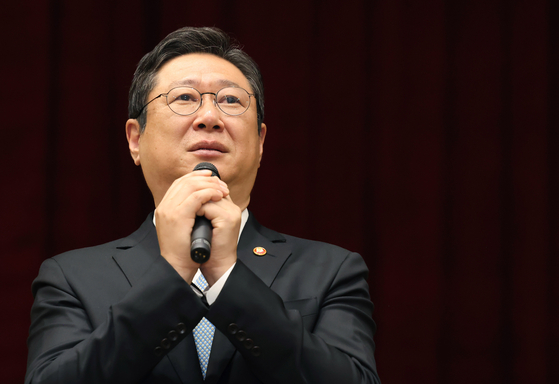 The raid was conducted earlier this month, the Seoul Metropolitan Police Agency said Thursday, and led to the confiscation of cell phones and computers that are being examined for evidence.

The raid came nearly four years after the People Power Party (PPP) first raised accusations against Hwang, who at the time was chosen by former President Moon Jae-in to serve as culture minister. Despite opposition from the PPP, Moon appointed him anyway.

The PPP claimed that Hwang, a longtime ally of Moon, spearheaded parliamentary efforts to pass a bill that allowed K-water to construct a building within a smart city complex in Busan to lease out while he was serving on the National Assembly’s Land, Infrastructure and Transport Committee in March 2018.

Hwang adamantly denied the accusation when asked by a JoongAng Ilbo reporter on Thursday, calling it “preposterous.” The DP lawmaker said he did not personally know the K-water official who offered him the donation, stressing that he was simply working to realize the central government’s vision of building so-called smart city zones in Busan and Sejong.

Asked why the police were raiding K-water a year later – after the PPP’s Yoon Suk-yeol was elected president – a Seoul police spokesperson denied any political pressure, saying investigative authorities had worked on the case “even before the raid.”

The spokesperson said police would continue the probe and try to focus on the nature of the donation, especially whether Hwang had provided favors to K-water for financial returns.