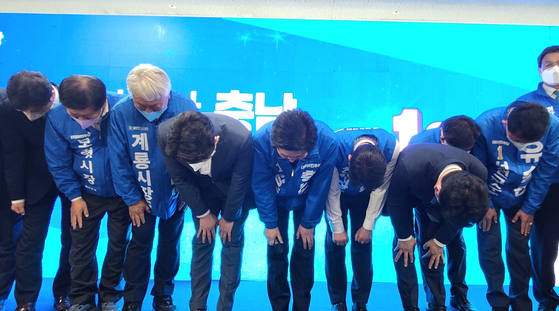 Top officials of the Democratic Party (DP) apologize Thursday at an opening ceremony of an election office in Cheonan, South Chungcheong, shortly after Rep. Park Wan-ju was expelled from the party on allegations of sexual misconduct. Among those who bowed in front of cameras were Lee Jae-myung, who lost to Yoon Suk-yeol in the presidential race and is now running for a DP parliamentary seat in Incheon; Park Ji-hyun, DP interim co-chair; and Lee Nak-yon, former prime minister and senior adviser to the DP. [NEWS1]
The Democratic Party (DP) expelled three-term senior lawmaker Park Wan-ju on allegations of sexual misconduct.

The party refused to get into the details Thursday, such as who the victim was or what type of sexual misconduct she suffered, but said an internal team investigated the situation and concluded Park was guilty.

Park, who represents Cheonan B of South Chungcheong, has made no public comment on the incident.

The accusation came to light just 20 days before the June 1 local elections, as the party tries to maintain its super-majority in the National Assembly after losing the presidency to the People Power Party (PPP) in March. President Yoon Suk-yeol’s PPP is the second-largest party in the legislature. 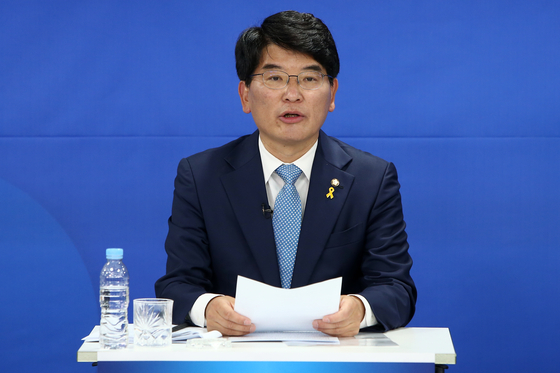 Rep. Park Wan-ju [YONHAP]
It’s not the first time this year that a DP member has been enmeshed in a sexual abuse case, but party officials say Park’s expulsion is particularly grave because he played key roles in the party. Park served as head of the party’s policy committee and ran for floor leader last year, though he lost to Rep. Yun Ho-jung, who now serves as co-chair of the DP’s interim leadership.

In a press briefing Thursday at the National Assembly in Yeouido, western Seoul, Rep. Shin Hyun-young, the party’s spokesperson, said the DP leadership decided to expel Park after he was found to have been the perpetrator of sexual misconduct against an unidentified figure within the party.
Shin said the DP plans to report the case to the National Assembly’s ethics center and “strongly ask for punishment.”

The spokesperson said the party would not reveal any specifics of the case so as not to cause any secondary trauma for the victim.

When asked by reporters whether there were one or several victims, Shin replied, “That’s hard to say. But I’ll tell you it’s not several.” Asked whether the victim was physically or verbally harassed, Shin responded, “I’ll just say that it was sexual misconduct.”

Shin mentioned that the case had been formally reported to the party, after which the party’s ethics inspection team launched an internal investigation. The police have yet to begin their own investigation, Shin said.

“I can’t tell you when this happened, because if I do, details of the case could be leaked,” she continued. “It was recently reported [to the party’s ethics inspection team] and we quickly responded.”

The DP has a checkered history when it comes to sexual abuse.

A year after former President Moon Jae-in won the election on a DP ticket, former South Chungcheong Gov. An Hee-jung was expelled from the party after he was accused of raping his secretary. An was found guilty and is now serving time in prison.

In early 2020, former Busan Mayor Oh Keo-don was expelled after he admitted to molesting a city employee. Later that same year, former Seoul Mayor Park Won-soon was accused of harassing his former secretary; he died soon later of an apparent suicide.