Nurses rally for a law of their own 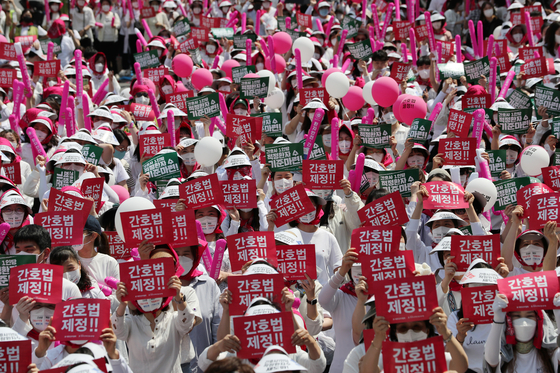 Thousands of nurses hold a rally in front of the Donga Duty Free Store in Jongno District, central Seoul, on Thursday. [NEWS1]

Over 4,000 nurses gathered in front of the Donga Duty Free Store in Jongno District, central Seoul, on Thursday, to demand better working conditions and the rapid enactment of a nursing law.

The Korea Nurses Association and the Korean Health and Medical Workers' Union organized the rally in time for the 51st International Nurses Day, which was celebrated Thursday.

Many nurses want a nursing law independent from the Medical Service Act in order to clarify the scope of their work and improve their working conditions. Medical groups such as the Korean Medical Association — comprised of doctors — have opposed such a law because of the concern that it could infringe on some duties that a doctor’s license covers.

“The governing and opposition parties have all promised the enactment of a nursing law,” said Shin Kyung-rim, president of the Korea Nurses Association, at the rally Thursday.

“Praise for nurses for being heroes during the pandemic are only words without follow-up,” Shin continued. “If there is no tangible result soon, we will declare a nationwide strike with other medical groups such as the Korean Health and Medical Workers’ Union.”

Additionally, the Korea Nurses Association demanded that the number of patients per nurse should be institutionally limited and that the legal system should be revamped to improve the treatment of nursing personnel.

“The problem of shortages of workers in the nursing community has never been resolved,” said Ms. Yoon, a 47-year-old nurse with 23 years of experience in the field, at the rally. “Especially with the Covid-19 pandemic, it felt like trying to squeeze water out of a dry towel for two whole years.

“One nurse has to look after an average of 15 patients,” Yoon continued, “which is too much.”

In a survey by the Korean Health and Medical Workers’ Union in January, the number of patients treated by one nurse was 15.2 on average. Nurses say that between five to ten patients is the appropriate number.

“I applaud all of you for your efforts to enact a nursing law,” said Elizabeth Iro, chief nursing officer at the World Health Organization in a congratulatory message via video conference. “I hope that a nursing law in your country will be enacted.”

“In the future, nurses should put more effort into research and innovation to promote health and to prevent and prepare for global infectious diseases,” said Iro.