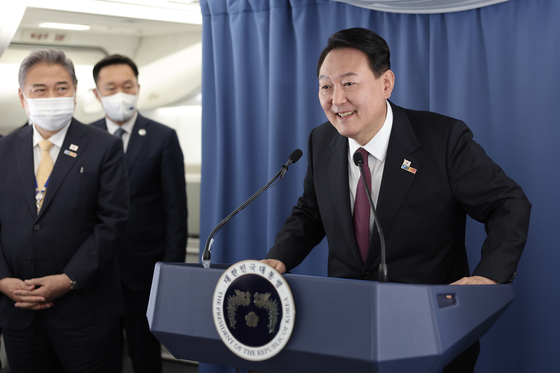 President Yoon Suk-yeol speaks to reporters in a press conference aboard Air Force One en route to Seoul from Madrid after concluding a five-day trip to Spain to attend a NATO summit. [YONHAP]
President Yoon Suk-yeol said he and the leaders of Japan and the United States agreed it would be desirable "in principle" to resume three-way security cooperation to respond to North Korea's threats, denying any attempt to exclude China.

Yoon described his summit with Japanese Prime Minister Fumio Kishida and U.S. President Joe Biden on the sidelines of a NATO gathering last week as his "most important and significant" diplomatic event in a press conference aboard Air Force One en route home to Seoul Friday.

"It is the first time in five years that the three countries leaders have discussed a joint response to the North Korean nuclear issue," he said.

Yoon rejected concerns from Beijing that the NATO gathering in Spain was aimed at excluding Russia and China.

"I am not excluding any specific country through the trilateral summit or participating in the NATO Summit," Yoon told reporters. "I believe that domestic issues and international relations should be dealt with in the spirit of universally pursued values."

He added, "If any country does not respect the rules-based order and acts against such values and norms, we will jointly condemn it and impose sanctions in solidarity. If a country accepts it, we will work together for world peace and prosperity."

In regard to the first Korea-Japan-U.S. summit held since 2017, Yoon noted that he, Biden and Kishida "agreed in principle that it would be desirable to resume military security cooperation that has been suspended for a long time to respond to the North Korean nuclear program."

He said that more details will be elaborated on through subsequent discussions among foreign ministers, defense ministers and security officials of each country.

Seoul and Tokyo have seen relations deteriorate over historical issues such as compensation for forced laborers and wartime sexual slavery victims.

Yoon's remarks indicate that Seoul supports an early normalization of the bilateral General Security of Military Information Agreement (Gsomia) with Tokyo. In 2019, the Moon Jae-in government put off the expiration of the Gsomia "conditionally" after initially withdrawing from the military intelligence-sharing pact in response to Japanese export restrictions on Korea. The trade restrictions were seen as retaliation against Korean Supreme Court rulings ordering Japanese companies to compensate victims of forced labor during Japan's colonial rule in 2018.

Kishida said during the trilateral summit last Wednesday that if North Korea conducts a seventh nuclear test, "I hope that response can be taken at the trilateral level, including joint exercises."

He also said that "in order to strengthen the deterrence and response capabilities" of its alliance with the United States, "Japan will fundamentally reinforce our defense capabilities."

Those pledges could raise worries in Seoul as being in line with Tokyo's attempts to amend its decades-old Peace Constitution to enable Japan to exercise the right of so-called collective self-defense, or the right to wage war.

On improvement of bilateral relations with Japan, Yoon in the press conference reiterated that "historical issues and matters about the two countries' future should all be placed on one table and resolved together."

He continued, "If we can discuss everything together, and if the two countries can cooperate for the future, I believe that the problems of the past will be sufficiently resolved."

Yoon and Kishida crossed paths five times in Spain – at a gala dinner hosted by the Spanish king Tuesday, four-way talks among NATO's Asia-Pacific partners (AP4), the trilateral summit, a photo session with the AP4 countries and NATO Secretary General Jens Stoltenberg and a NATO session for partner countries.

Though the two leaders failed to hold a bilateral summit, a presidential official on Wednesday expressed optimism that there was a "top-down" desire to resolve relations. Despite an olive branch extended by South Korea, diplomatic efforts are expected to resume only after Japanese upper house parliamentary elections this month.

During the 24-minute press conference, Yoon emphasized the term "values," echoing the theme of his address to the NATO Summit Thursday, where he stressed a message of solidarity over shared values such as liberal democracy, human rights and the rule of law.

Yoon and first lady Kim Keon-hee wrapped up their five-day trip to Spain Friday and returned to Seoul Air Base in Seongnam Friday. It was their first overseas trip.

Yoon became the first Korean president to participate in a NATO summit.

The 30-member NATO invited four Asia-Pacific partners — South Korea, Japan, Australia and New Zealand — to take part in this year's summit hosted by Spain. The four countries held an inaugural AP4 meeting on the sidelines of the summit.

The presidential office said Yoon met with nearly 30 leaders during the NATO Summit.

Yoon took part in a total of 16 diplomatic activities, including 10 bilateral talks with the leaders of Australia, the Netherlands, France, Poland, Turkey, Denmark, Czech Republic, Canada, Britain and the European Union.

Such meetings were opportunities for South Korea to pursue "sale diplomacy."

Yoon told reporters aboard Air Force One, "Many countries in Europe were very interested in new nuclear power plants in order to attain energy security and 2050 carbon neutrality."

He said that he shared brochures about APR1400, Korea's next-generation nuclear reactors, in many of his talks.

"In particular, Eastern and Nordic countries recognized Korea's nuclear power plants, green technologies, semiconductors and next-generation electric vehicle battery capabilities as top-level in the world and expressed a desire to cooperate with Korea in such fields," said presidential spokesperson Kang In-sun in a statement Sunday.

Yoon was quoted as saying that he "realized anew that the future of our country depends on these fields."

The visit was also an opportunity for Yoon to ask for countries' support for Busan's bid to host the 2030 World Expo.

The first lady took part in a series of events for the spouses of NATO leaders and individual activities in support of the Korean community in Spain.