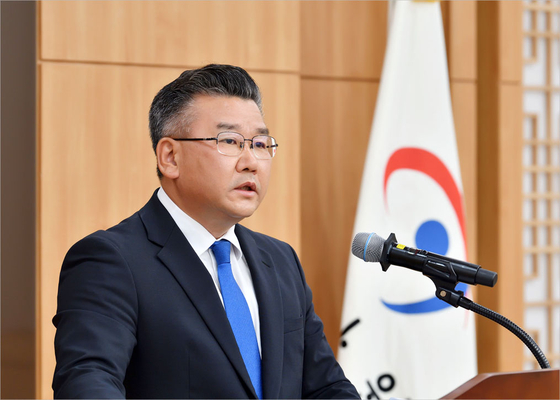 Board of Audit and Inspection Secretary General Ryou Byeong-ho speaks during his appointment ceremony at the board's headquarters in Jongno District, central Seoul on June 15. [YONHAP]

The election watchdog will be investigated for how it handled early voting for Covid-19 patients during the presidential election in March, the Board of Audit and Inspection (BAI) announced Monday.

The BAI sent investigators to the National Election Commission (NEC) headquarters in Gwacheon, just south of Seoul, on Monday to conduct a preliminary audit of data.

In accordance with a directive issued by BAI Secretary General Ryou Byeong-ho, who was appointed last month, the board plans to conduct its main audit of the NEC in September, after it has processed the preliminary audit.

“The upcoming audit will not only look into the NEC’s administrative and accounting practices, but also examine how the commission carries out its functions and duties, including those tied to the last presidential election,” said a BAI official who spoke to the JoongAng Ilbo on condition of anonymity.

This will be the first audit in which the BAI investigates how the NEC carries out its core functions.

The NEC appears to be on the defense, with an official telling the JoongAng Ilbo on condition of anonymity that it is “watching closely as to whether the Board of Audit and Inspection will look into the details of our election management.”

The NEC came under heavy criticism for mishandling ballots during the March presidential election after photographs were posted online of election workers placing the ballots of Covid-19 and quarantined voters in cardboard boxes, plastic containers and shopping bags, leading to doubt as to whether these votes ever actually reached the ballot boxes.

Other isolated instances of poor ballot handling were reported on election day, with one voter in Bucheon, Gyeonggi, being mistakenly issued two ballots, while two voters in Osan, Gyeonggi and Yecheon County, North Gyeongsang were turned away because local election officials mistakenly thought they had already voted.

The fact that six out of seven members of the NEC at the time of the election were appointed by then-President Moon Jae-in or appointed by Chief Justice Kim Myeong-su led to accusations that the agency was not politically neutral.

An audit by the BAI into how the NEC executed its core duties during the election could set off a struggle between the two government bodies.

Under Article 97 of the constitution, the BAI is tasked with auditing “administrative agencies and their officials,” which doesn't include government bodies with a constitutional mandate, such as the National Assembly, the judiciary and the NEC.

On the other hand, Article 24 of the Board of Audit and Inspection Act only lists “the National Assembly, the judiciary and the Constitutional Court” as exempt from BAI inspections, thus leaving ambiguity as to whether the board can audit the NEC.

A high-ranking NEC official who spoke to the JoongAng Ilbo on condition of anonymity insisted that the commission “has its own internal audit system” and that “an audit of the NEC by an agency like the BAI, which is under the executive branch, could infringe on the independence and neutrality of the NEC’s constitutional mandate.”