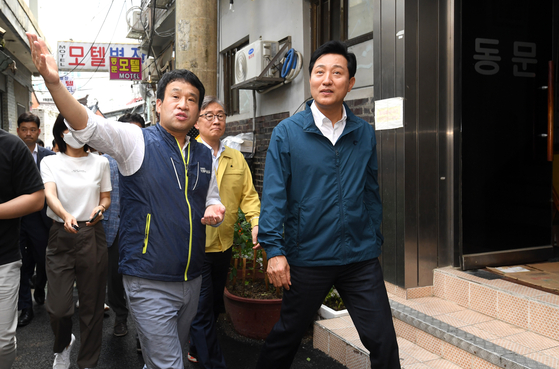 “[I will support] the city's vulnerable groups to resolve the polarization of our society and enhance the competitiveness of Seoul," Oh said in his inaugural address as 39th Mayor of Seoul, which was streamed online Friday.

“All the policies of Seoul will put the socially vulnerable as a top priority, and make sure the disadvantaged and marginalized groups benefit more,” Oh said.

He said livelihood issues, education, housing and medical care were the four most urgent problems for the vulnerable.

Five hundred low-income households have been chosen to take part in a pilot run of Oh's Seoul Safety Income program, which guarantees a minimum income for households below the median income.

Oh also emphasized stabilizing the real estate market, which has been a challenge in Seoul.

“I will stabilize the real estate market by normalizing redevelopment and reconstruction,” Oh said.

“The stabilization of the real estate market is the most important issue that Seoul — a mega city with 10 million residents — faces,” he added.

In his inauguration speech, Oh emphasized a vision of enhancing Seoul's urban competitiveness so it is on par with other global cities such as New York, London and Tokyo.

To make Seoul one of the world's top five cities, the old downtown areas such as Euljiro, Jongno, and Toegye-ro will be revamped as business complex towns, while a "global innovation core" will be made by linking Yongsan's international business function with Yeouido's global financial function, Oh said.

Oh also mentioned projects such as the Jicheon (Stream) Renaissance — aimed at converting Seoul's small streams into waterfront living spaces — or turning Nodeul Island on the Han River into a global landmark.

Oh is the first person to be elected mayor of Seoul for the fourth time. He will end his term on June 30, 2026.