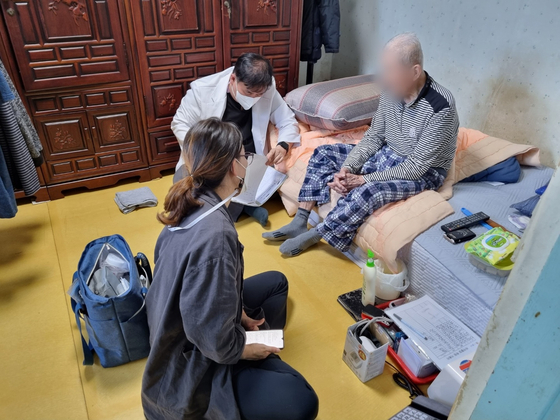 Song Dae-hoon, an internist in Paju, Gyeonggi, headed out for housecalls on May 31. His first patient was Mr. Park, who suffers from diabetes and high blood pressure and can barely get out of bed.

Song fires questions at Park’s son-in-law, Yoon Jong-beom, 65, who is his guardian. Does he have an appetite? Does he have any symptoms of nausea or vomiting? Does his mouth dry up?

Suddenly, Song heads to the kitchen and flings open the fridge.

"Mr. Park seems to be eating salty,” Song says. “I can see by looking in the refrigerator. I only see dishes like jangajji (pickled vegetables).”

Song massages Park's arms, legs and calves and tells him to get out of bed more often.

“He's run a farm all his life but has lost all his muscle,” Song points out. “He needs to exercise now."

Song prescribes a new medication, repeats his warning about salty food and leaves.

“The doctor often looks inside the refrigerator to check whether there’s any alcohol in it,” Yoon tells a reporter. “It's really nice that he treats my father-in-law like his own family.”

Dr. Song is one of the doctors participating in a government pilot project for house calls, which started in December 2019. 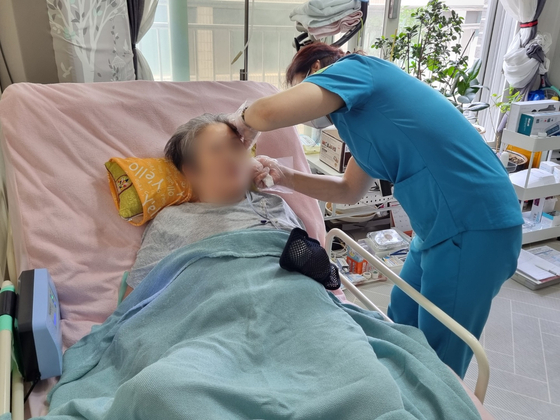 The project is looking for ways to bring healthcare to the elderly and disabled in their residences.

Jang Soon-taek, 74, who developed a diabetic foot ulcer on his left ankle, was another patient Song visited that day. He can't move well after suffering a stroke, and going to a hospital is beyond him.

“It requires far less effort [for us] as the doctor comes to our home,” Park says. “At a doctor's office, I feel somewhat intimidated and cannot ask questions, and house call services make me feel more at ease.”

“Whenever I go to a patient’s house, there are many clues to their lifestyles, such as what they eat, whether they take nutritional supplements, and exercise,” explains Dr. Song. “Looking into such things takes more time than consulting inside a clinic.”

House calls seem like a custom from the past, but as Korea’s demographic shifts to an aging society, they might be a necessary part of its future.

And yet the number of medical clinics that applied to offer house call services in the pilot project was a measly 332, according to data from the Health Ministry, just one percent of the 33,000 medical clinics operating nationwide.

Among those 332, only 142 (43 percent) actually made house calls since the start of the pilot project through this April, tending to 4,722 patients.

Doctors say the fees they are allowed to charge for house calls is too low considering the time and distance needed to treat one patient. Before the government rolled out the pilot project, there was no separate medical fee applied to house calls services, and for doctors, there was no benefit in stepping into home call services.

“From a doctor’s perspective, we are nervous about giving treatment outside a hospital,” says Jang Hyeon-jae, director of the Fatima Clinic in Nowon District in northern Seoul, who has been making house calls for more than ten years, even before the launch of the pilot project.

"It's no easy task to leave the hospital," Jang says. "Plus, the risk of possible medical accidents is not small." 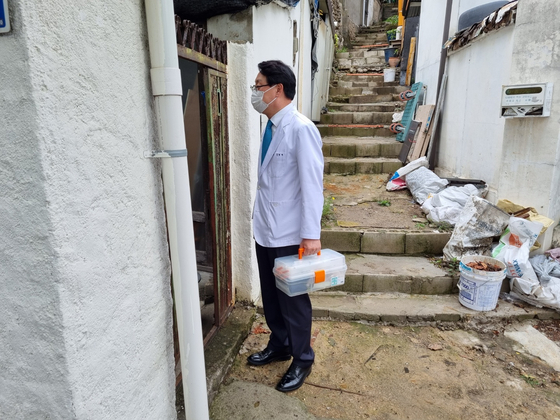 “Basically, two or more people must work in pairs," says internist Song Dae-hoon, "and the type of treatment must also be changed [from general in-patient care].”

Currently, the medical fee for a house call is 124,280 won ($95), and it includes simple treatment, management of bed sores, and blood sugar tests.

A house call usually takes around 20 minutes — and including travel time, each takes about an hour. In an hour, doctors can see at least 10 people in their office.

Being out of the office also could incur opportunity costs: missing out on new patients, who may choose to go to another clinic. That's a long-term loss: returning patients are the bread and butter of a doctor.

“If I miss a new patient, I’m missing the opportunity for the patient to come several times, such as for second and third visits," Jang says.

The pilot project for house calls is set to end at the end of this year.

The health ministry will evaluate how it went in the second half of the year and decide whether to expand or switch to an actual system.