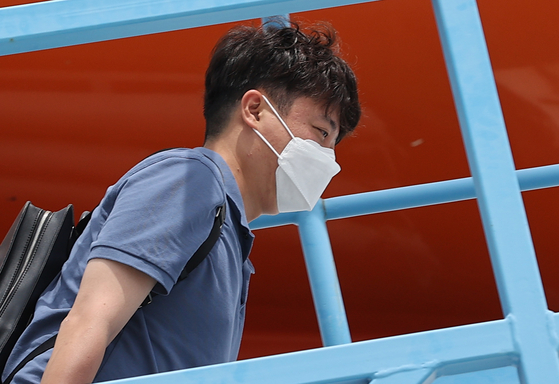 Lee Jun-seok, the embattled chairman of the People Power Party (PPP), blasted President Yoon Suk-yeol for dismissing criticism of his ministerial appointments as the party prepares to transition to a new leadership structure.

Lee has been suspended from the PPP chairmanship following allegations that he accepted sexual favors and 11.5 million won ($8,800) in bribes from a business owner in 2013 while he was on the emergency steering committee of the Grand National Party, the PPP’s predecessor.

In a Facebook post criticizing Yoon on Thursday, Lee also suggested his suspension was driven by political revenge for comments made by Lee’s close ally, PPP youth affairs representative Park Min-young, in which the president’s attitude towards governance was criticized.

Park uploaded a post to social media on July 5 criticizing the president for asking, “Were the ministers appointed by the previous administration such outstanding individuals?” when asked by reporters whether his candidates for top government posts had been properly vetted.

“While the president might be able to silence the Democratic Party (DP) by referencing their own appointments, this is not an adequate answer considering his promise to the people to do better,” Park wrote.

Three of the president’s ministerial picks were forced to walk away from their appointments after facing misconduct allegations related to their families or political funds.

In his Thursday post, the suspended PPP chairman also blasted Yoon for his response to questions from reporters about his failed nominations, calling it “a remark that should never have left his lips.”

The two men have had a rocky relationship ever since Yoon began mulling a presidential run with the PPP last year.

Lee’s open criticism of the president comes as the PPP prepares to transition to a leadership structure that excludes its currently suspended chairman from a decision-making role.

On Monday, the PPP decided to shift to an emergency response committee system to replace its current one-man leadership in a vote that passed with only one opposing ballot from the 89 lawmakers in attendance.

The PPP plans to hold a national committee meeting as early as Friday to approve the transition to the new leadership system.

In an interview with CBS Radio on Wednesday, PPP lawmaker Kim Gi-hyeon, a former floor leader seen as one of the candidates for party chairman, said that the emergency committee system should run the party for only about two months before a new leader can be elected.

The emergency committee would replace the one-man leadership of Kweon — and before him, the now-suspended Lee Jun-seok — with an interim collective leadership amid plummeting public approval ratings for both the party and the president.

Kweon resigned on Sunday after his private text correspondence with Yoon taking a jab at Lee were photographed over his shoulder in public.

As a result, three PPP lawmakers resigned from the party's Supreme Council over the weekend, and Kweon stepped down as acting chief.