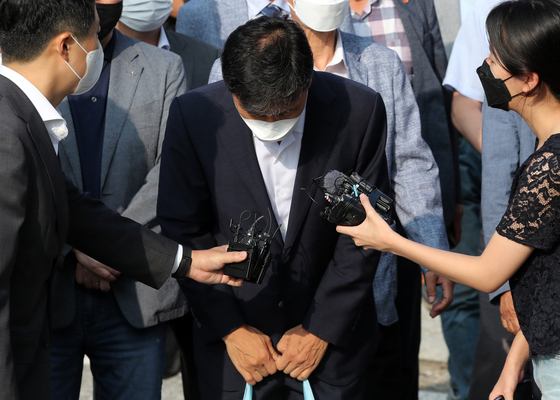 Former South Chungcheong Governor An Hee-jung, who was sentenced to three years and six months in prison for sexually assaulting and raping his secretary, was released from Yeoju Correctional Institution in Gyeonggi at 7:55 a.m. Thursday morning.

An was greeted by some 60 people outside the prison, including friends from his hometown and Democratic Party Rep. Kim Jong-min, who is known to be An’s friend from his school days. An did not respond to reporters’ questions but bowed once before getting into a vehicle and driving away.

In April 2018, An was indicted on charges of sexually assaulting and raping his secretary between July 2017 to February 2018 and stepped down from South Chuncheong governor. In September 2019, the Supreme Court upheld a lower court’s sentence of three years and six months in prison for the former governor.

While An was in prison, he was temporarily released after the deaths of his mother in July 2020 and of his father in March this year.

In accordance with related laws, An cannot run for office for the next ten years. The former governor was once a strong candidate from the Democratic Party for the county’s presidency.