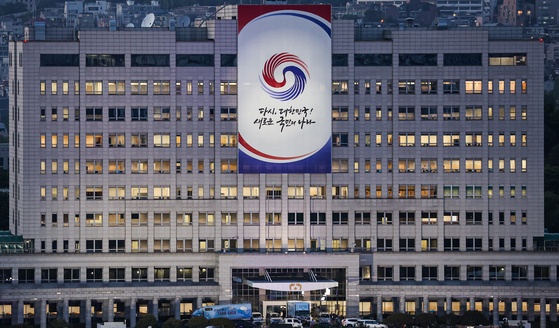 The presidential office distanced itself from a so-called shaman who allegedly has been flaunting his closeness with President Yoon Suk-yeol and first lady Kim Keon-hee.

A man who goes by the moniker Geonjin, although his real surname is Jeon, is a figure familiar from Yoon's presidential campaign. Media reports in January revealed he worked for the People Power Party's (PPP) election campaign headquarters' networking subcommittee.

Reportedly, Jeon has been trying to use his relationship with the presidential couple for personal gain, such as evading a tax audit. Rumors about Jeon started as jjirashi, or rumors circulated in brokerage houses, and mainstream media outlets picked them up earlier this week.

On Tuesday, media outlets reported that the presidential office warned major conglomerates to be wary of Jeon, who could try to leverage his relationship with the presidential couple to curry favors with them.

When asked by a reporter about allegations surrounding Jeon, a presidential official said Wednesday that the presidential secretary's office on public office discipline would be monitoring the matter.

"Taking into consideration the nature of that office," the official continued, "we aren't able to confirm whether certain actions are taken for a specific person or issue."


The office in question is supposed to monitor civil servants, so it's unclear if it should deal with Jeon.

Jeon first gained the spotlight after he was spotted in a video recorded on Jan. 1, in which he appeared to introduce Yoon to campaign staffers when the presidential candidate visited the campaign's networking subcommittee office.

Jeon was reported to be an acquaintance of Yoon and his wife.

In response to those reports, the PPP immediately denied that Jeon had a big influence in the campaign and days later dissolved the networking subcommittee.

Yoon and Kim have for months sparked headlines for their alleged interest in shamanism and fortune-telling.

In a leaked phone call with a reporter in January, Kim herself claimed to be a "spiritual person" and said she likes talking to "dosa," a term for shamans.

DP interim leader Woo Sang-ho brought up the issue in a party meeting Wednesday. "There are a series of reports about a shaman known as Monk Geonjin using his close relationship with the president and his wife for evading tax audits," he said.

DP Rep. Jo O-seop said Tuesday, "Everyone knows the relationship between President Yoon Suk-yeol and his wife with Jeon, a shaman, which has been going on since the presidential campaign."