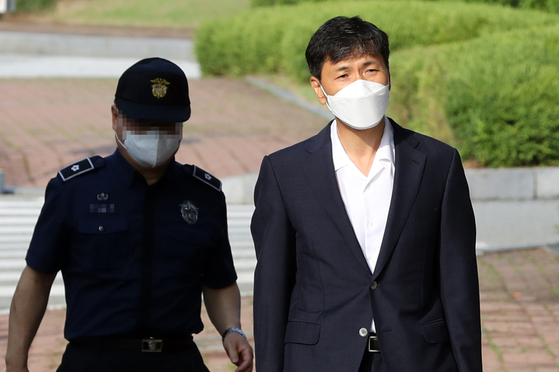 Former South Chungcheong Gov. An Hee-jung leaves the Yeoju Correctional Institution in Gyeonggi on Thursday morning after serving three and a half years in prison. [YONHAP]
Former South Chungcheong Gov. An Hee-jung, a former liberal presidential hopeful, was discharged from prison Thursday morning after serving a three-and-a-half-year sentence for repeatedly raping and sexually assaulting his secretary.

An left the Yeoju Correctional Institution in Gyeonggi at around 8 a.m. and was greeted by a crowd of some 60 supporters, including Democratic Party (DP) Reps. Kang Jun-hyeon and Kim Jong-min, who are known to be his friends.

The former governor shook hands with several people and bowed in front of media cameras, but did not respond to questions from reporters asking how he felt.

An drove away in a car that had been waiting outside.

An is known to be planning to stay at his home in Yangpyeong County, Gyeonggi, where he lived before going to jail. An and his wife of 33 years got divorced late last year.

Under Korea’s Public Official Election Act, An is prohibited from running for public office until mid-2032.

The 57-year-old was the first high-profile politician accused of sexual misconduct when the MeToo movement gained force in Korea in 2018.

His secretary, Kim Ji-eun, appeared on the prime-time evening news show of broadcaster JTBC in March 2018, revealing that her boss had raped her four times and sexually assaulted her “on a rolling basis.”

The tell-all interview was a rare public accusation for Korea, where sexual abuse victims rarely opened up about their experiences in fear of shame and retaliation. Kim’s bravery was a watershed moment and inspired other women to step out from the shadows.

Soon after Kim’s interview was aired, An denied any wrongdoing, arguing that his actions were consensual. An stepped down from South Chungcheong governor anyway but insisted throughout his trial he was innocent.

In August 2018, a lower court acquitted An. But a higher court threw out that ruling in February 2019 and sentenced him to three and a half years in prison. An appealed, but the Supreme Court upheld the prison sentence in September 2019.