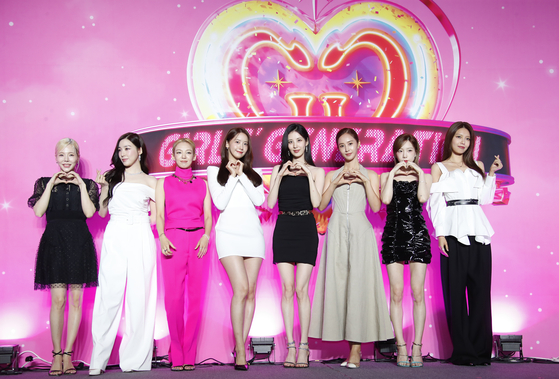 Girls' Generation poses during a press conference at Coex in southern Seoul on Friday to promote its upcoming full-length album ″Forever 1.″ [NEWS1]

It’s been five years since the girl group last dropped the full-length album “Holiday Night,” which had the lead tracks “Holiday” and “All Night.”

Including the titular track, “Forever 1” will have 10 songs.

“We were actually discussing a comeback since last year,” Sooyoung said during the event. “But we decided we wanted to properly return with a full-length album for our 15th anniversary as a group. We told our agency [SM Entertainment] that we wanted time to put more effort into creating an album. So it was postponed it for about a year and we took time to collect more songs.”

“We worked really hard for this album, considering that it symbolizes our 15th anniversary,” Taeyeon said. “It’s like a gift — we reflected a lot of the members’ opinions into it.”

About the lead track “Forever 1,” Sunny explained that it illustrates an everlasting love toward cherished people.

“It’s a song that’s fit for Girls’ Generation right now,” she said. “Today is our 15th anniversary. We feel like we reviewed everything we had done together in the past. We’re really proud of what we’ve done and we had some time to think about what we will do in the future.”

“It’s certainly not easy for all eight members to agree on the same thing, but we all have the same purpose. We think that Girls’ Generation could last all this time because we are also fans of the group itself," Taeyeon said.

“Forever 1” will be released on music streaming sites at 6 p.m. today. Hardcopies will go on sale on Aug. 8.