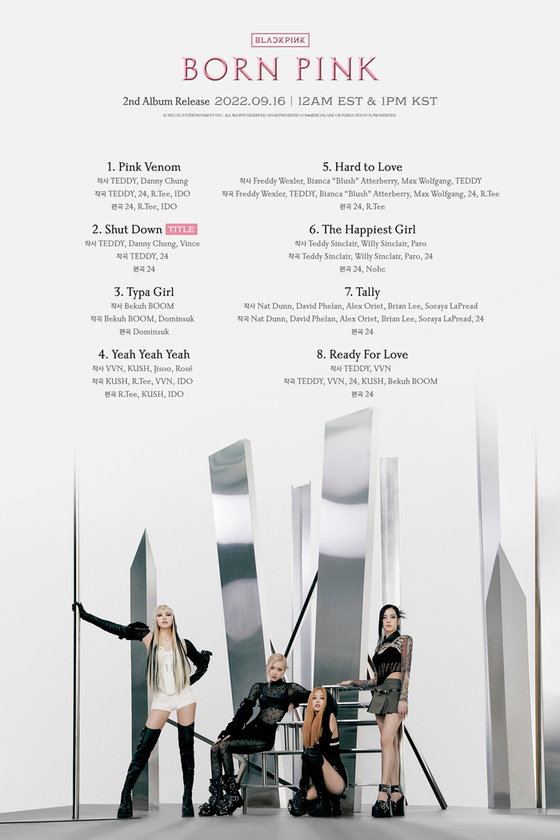 The second full-length album from the girl group consists of eight songs.

The album starts off with the already popular track “Pink Venom,” which was pre-released last month, followed by the lead track “Shut Down.” Other songs on the album are: “Typa Girl,” “Yeah Yeah Yeah,” “Hard to Love,” “The Happie Girl,” Tally” and “Ready For Love.”

YG Entertainment’s subsidiary The Black Label, headed by producer and rapper Teddy has taken the helm in producing the album, together with producers and composers like 24, Danny Chung, Bekuh BOOM and R.Tee.

Freddy Wexler, who produced Ariana Grande and Justin Bieber’s “Stuck with U” and Teddy Sinclair and Nat Dunn, who worked on songs for Rihanna and Anne-Marie participated in the production of “Hard to Love.”

“The group’s unique identity has been well expressed in the songs,” YG Entertainment said in a statement. “A lot of people have worked hard to produce all eight songs over a long time. We hope all the fans of Blackpink love listening to all of them.”

“Born Pink” is Blackpink’s much anticipated second full-length album that comes a year and 10 months after its first “The Album.”