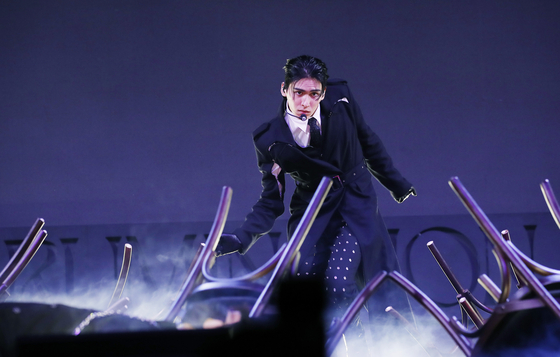 Yoo’s label FNC Entertainment announced Friday that the singer has been cast in the role of Ao, an AI robot who gets tried in court for murdering its owner.

According to Eda Entertainment and TMM, the production companies of the musical, “Human Court” is a sci-fi musical about a court battle between humans and robots. It’s based on a novel of the same name by writer Jo Kwang-hee, who is also a lawyer. The musical is set in the 22nd century and revolves around Ao, which is custom-made using its owner Han Shi-ro’s DNA.

Another boy band member, Ken from VIXX, and actor Ryu Chan-yeol will alternate the role of Ao.

Yoo made his musical debut last year in the Korean production of “Altar Boyz” as a character named Juan, and received positive reviews from musical fans and critics for his potential as a musical actor. He also played the role of a North Korean spy named Rhee Hae-rang in the musical “Secretly Greatly: The Last” from May to July. The musical, which premiered in 2016, is based on a webtoon of the same name. The webtoon was also adapted into a film “Secretly, Greatly” in 2013, starring heartthrob Kim Soo-hyun as a North Korean agent.

“Human Court” premieres on Sept. 28 at the Daehangno Art One Theater in central Seoul.