BTS conquers Busan — and not on concert night alone

BTS conquers Busan — and not on concert night alone 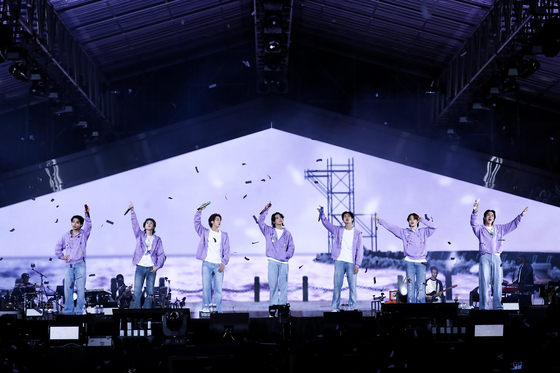 BTS performs during its free concert “BTS 〈Yet To Come〉 in Busan” on Oct. 15 at the Busan Asiad Main Stadium. [BIGHIT MUSIC]


K-pop phenomenon BTS came, saw and conquered Busan with its concert “BTS 〈Yet To Come〉 in Busan” on Saturday, which was in support of the seaside city’s bid to host the World Expo 2030.

The boy band entertained a crowd of 50,000 free of charge at the Busan Asiad Main Stadium with a 90-minute set list of its greatest hits. After opening the evening with fireworks and “MIC Drop,” “Run BTS” and “Run,” the seven members — RM, V, Suga, Jin, Jungkook, Jimin and J-Hope — greeted the roaring audience.

“Busan, make some noise!” RM, the band’s leader, said. “It’s our first concert in Busan in three years. It’s an honor that holds an even more special meaning, to be here hoping for Busan to host the World Expo 2030.” 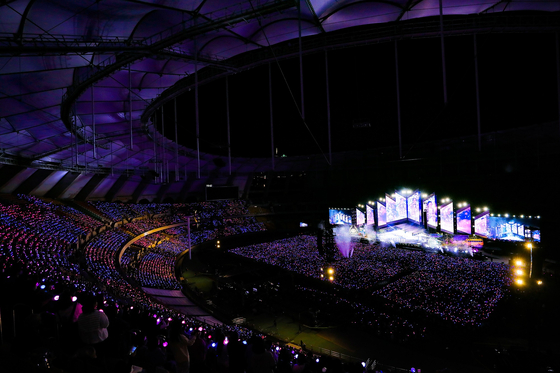 
“All the members were full of anticipation as we prepared our first Busan concert in three years.” Said V. “But I’m sure Jimin and Jungkook are especially excited.”

“Jimin and I are from Busan,” said Jungkook, who greeted the crowd in Busan dialect. “I’m so happy to spend time with this many ARMY [BTS’s fans] in Busan tonight.”

“It’s an honor to meet you all here,” said Jimin. “My heart is fluttering, but it also feels strange that I’ve brought you to my hometown.”

“We prepared the set list with songs that you can all dance along to and enjoy,” said J-Hope. “Hearing all these roars and cheers, I can’t control my energy!” 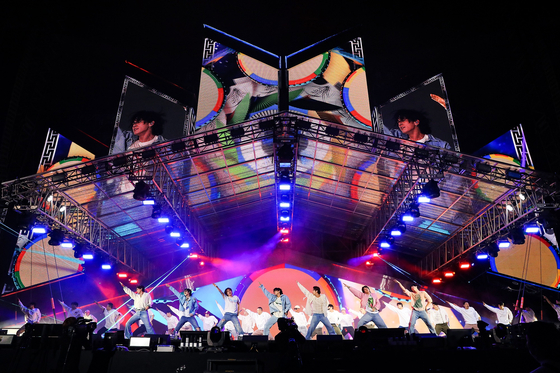 
“We’re excited to hold a concert in Korea that allows cheering out loud for the first time in such a long time,” said Suga. At BTS’s Seoul concert in March, cheering was prohibited due to Covid restrictions. “This concert is a festival. Let go of everything and enjoy!”

“I know so many people around the world are also watching us [online] right now,” said Jin. “Let’s keep this energy and go!”

During the concert, Jin dropped the news that he is working on a solo album. This will make him the second BTS member to release solo music since J-Hope in July. 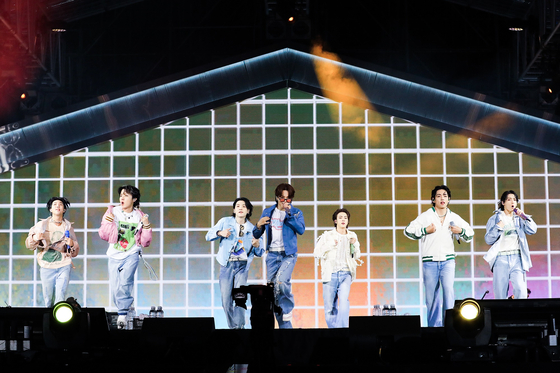 Members paid homage to their roots in the number “Ma City,” a song about their hometowns, and also featured a traditional Korean lion mask and dance on stage for “Idol.” 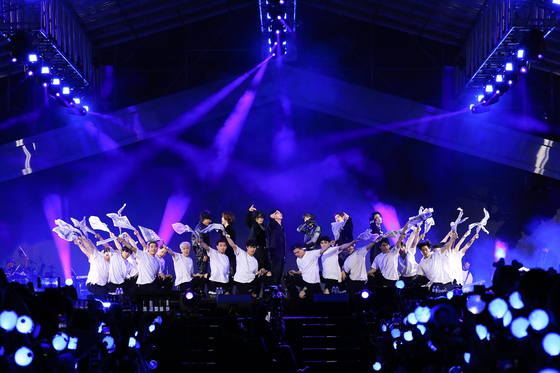 
“This is a concert in Busan, so we couldn’t skip this number,” said Jimin before performing “Ma City.” “Welcome to my city!”

“We feel like we didn’t have enough time to prepare for this concert, but we still put our hearts into every little detail,” Jungkook said toward the end of the night. “Thanks to you guys [ARMY] today, I’m realizing that we had nothing to worry about.”

Many of the fans waited outside the stadium from the early morning to get prime standing positions near the stage, dressed in the boy band’s signature color purple from head to toe. Some distributed packages of fan-made photo cards and candies to fellow ARMY members, all to spread their love for BTS.

“Giving out freebies is just sharing the love and fully experiencing the spirit at the concert,” Valeria, a 22-year-old Colombian ARMY member told the Korea JoongAng Daily. “It’s also a great way to meet new people, having small talk and asking each other ‘Who’s your bias [K-pop slang for favorite member]?” After becoming a fan in 2017, Valeria actually moved to Korea in 2019. 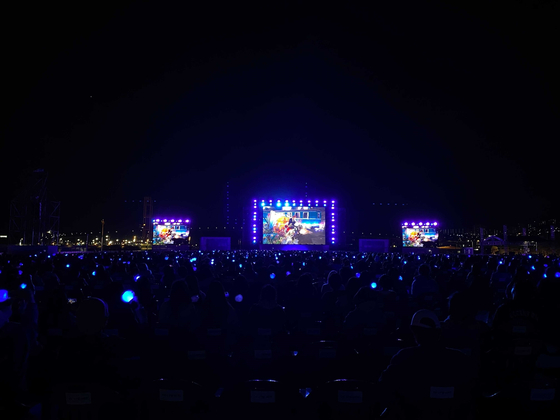 
“When I first start watching BTS’s videos, I fell in love with their personality and their songs were so magical,” she continued. “The message in their songs communicate to us to be better and I feel like I’ve been growing with them. BTS wants to make a connection, and the ARMY fandom is so united. Oh my God, I feel like I’m gonna cry.”

“I’m not sure if this concert will help Busan hold the expo, but one thing for sure is a boost for tourism,” said one fan who flew from France for the event and wished to stay anonymous. “During my stay here, I’ve been visiting locations in Busan where some of the members grew up. We’re naturally interested in those spots.” 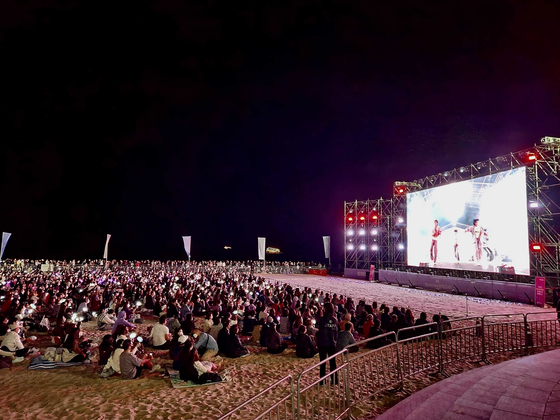 The audience watches a livestream of the concert on Haeundae beach on Oct. 15. [BIGHIT MUSIC]


Even those who were not able to get their hands on a ticket gathered on nearby pedestrian overpasses to feel the festive mood. Large screens and seats were set up in the Busan Port International Passenger Terminal’s outdoor parking lot and Haeundae beach for tens of thousands to enjoy a livestream of the concert. Booths for raffles and sponsored brand promotions were set up outside the main stadium but also at the livestream venues, so fans could enjoy the full experience wherever they are.

The concert was livestreamed on television channels JTBC and Japan’s TBS Channel 1, as well as online platforms Weverse, Zepeto and Naver Now. BTS’s management HYBE estimated that over 10 million people around the globe watched the concert online. 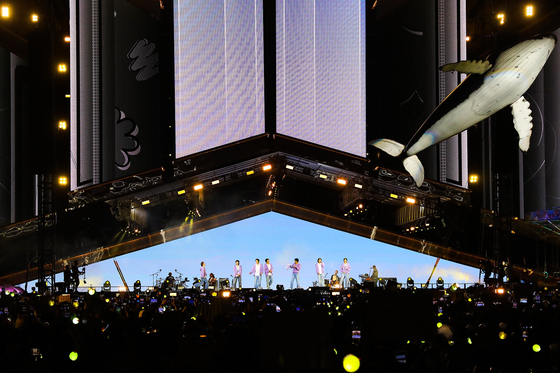 
“The set list felt so short while rehearsing. Why does it feel so short now?” said Jin. “If it felt like time flew, it means we were that happy.” That was an especially meaningful quote coming from Jin, who has to enlist for mandatory military service in December.

The band has had a tumultuous 2022 due to the members’ imminent enlistment for military service — unless they are exempted by the government.

“This moment can’t last forever, but we always have another tomorrow,” said RM, wrapping up the concert. “So we’ll say goodbye for tonight with even bigger anticipation.”


“The City in Busan”


Surrounding the concert, HYBE launched the project “The City in Busan” to expand the concert experience across the city. Landmarks such as Gwangan Bridge, Busan Harbor Bridge, Busan Tower and many other skyscrapers were lit up in BTS purple.

At the LCT Haeundae, a building complex by the beach, HYBE held a photo exhibit about the past nine years of BTS, as well as art installations inspired by the boy band’s music and aesthetics. A merchandise store sold goods only available at the exhibition. 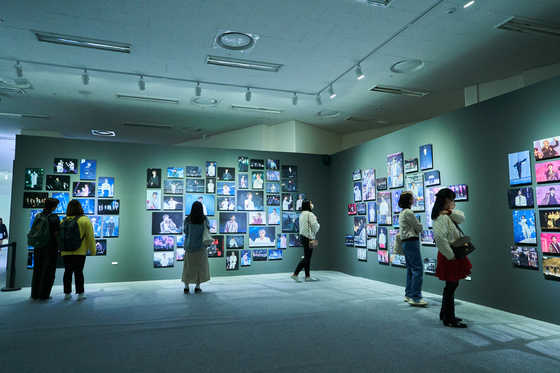 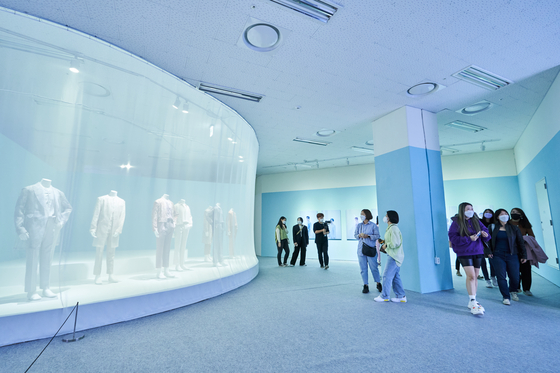 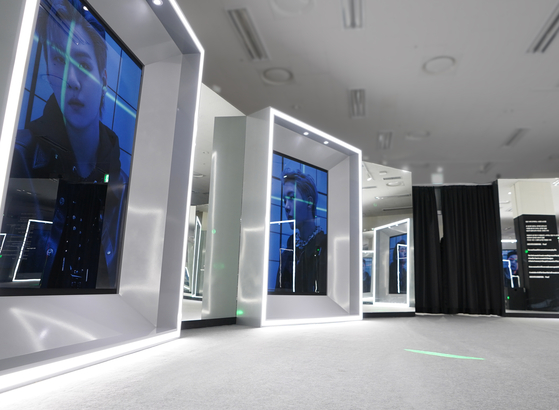 At Paradise Hotel, which also hosted a party the night before the concert, around 100 rooms out of the 530 were offered as BTS-themed rooms.

“I paid $500 for a weekday at the Hyatt, and a weekend night at both the Hyatt and Paradise cost $900,” said Ariel, a Philippine fan who flew in for the concert and stayed in Busan for week. 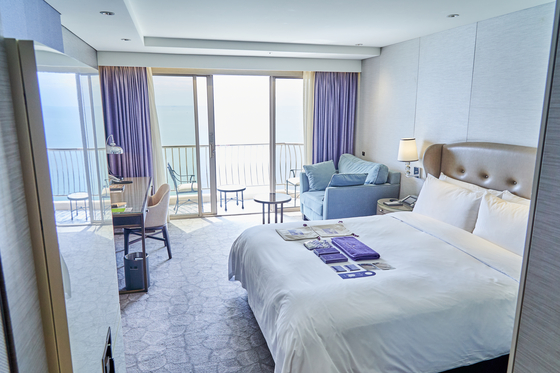 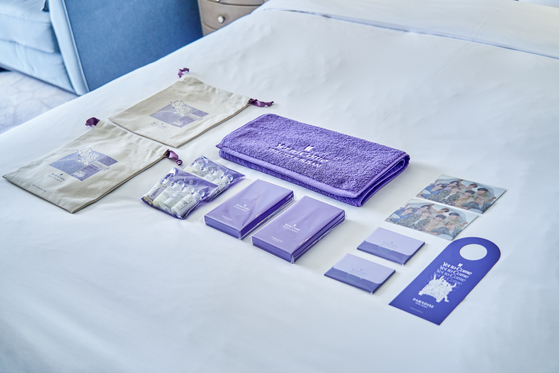 
Despite the considerable cost, all the themed rooms were sold out, according to Vincent Lee, the Marketing Communication PR Manager of Paradise Hotel Busan.

“Out of all the reservations for BTS-themed rooms, 70% were by Japanese nationals,” said Lee. Reservations were made only via HYBE’s official Twitter account.

In each room, which came with a specially-designed purple card key, Paradise Hotel prepared exclusive BTS merchandise including a beach towel, suitcase nametag, amenities with special packaging, and never-before-seen photo cards and postcards.

“Our designers really put in their ‘Blood, Sweat & Tears’ to create these memorable souvenirs,” Lee said, referring to BTS’s 2016 hit.

“We also offer an exclusive lounge for guests staying in the BTS-themed rooms,” Lee added. “The lounge includes a warm water pool with a full view of Haeundae beach. The poolside lounge also offers food that BTS members enjoy. They tasted the menu themselves.” 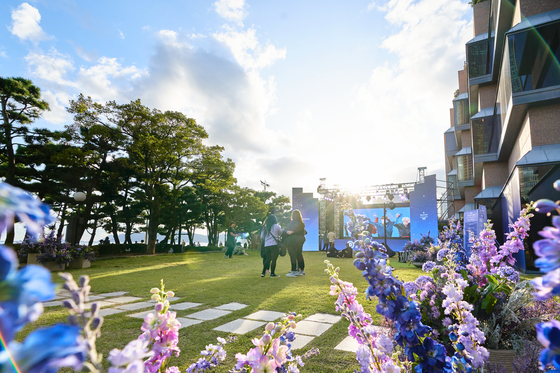 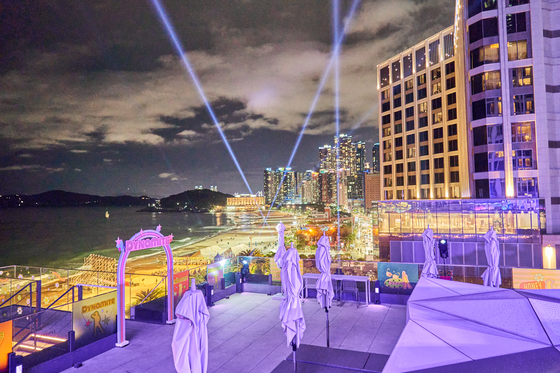 
The lounge, as well as the beachside garden at Paradise Hotel, play BTS tracks all day until Sunday. Aside from luxury hotels, room rates at other hotels in the Busan area were reported to have skyrocketed five to ten times. Most were sold out.

Temporary official merchandise stores also opened up in Lotte Department Store Busan Branch and Seoul’s Lotte World Mall from Oct. 7 to 16, along with smaller pop-up stores throughout Busan. The Lotte World Mall store in Jamsil sold out most of its products in less than a week. 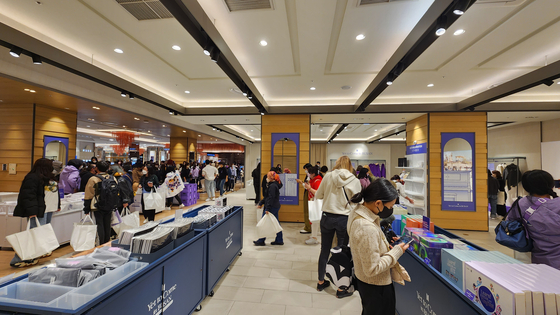 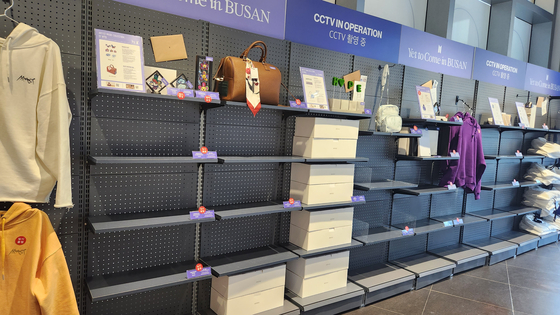 A pop-up merchandise store also opened at the Lotte World Mall in southern Seoul. Most goods at the Seoul store were sold out within the first week. [HALEY YANG]


Shopping was even more intense at the Lotte Department Store Busan Branch, which saw a long line of fans before the department store opened. Due to high demand, clerks were constantly restocking and telling fans that purchases for some items were restricted to one per customer.

“Since this concert was free, I think I’m going to compensate by buying more goods, said Christina, a 38-year-old American residing in Daegu. She purchased worth $500 of goods, including a purple hoodie, face mask, tote bag, decorative badges and more.

“I discovered BTS in 2018 and became interested in Korean culture and history overall,” she said. “I already have a bunch more merchandise at home.” 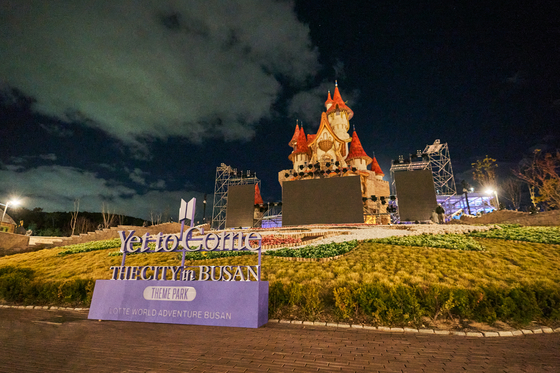 Lotte World Adventure, an amusement park, was lit up in purple and offered BTS-inspired events, including an afterparty over the weekend. [BIGHIT MUSIC]

Landmarks throughout Busan were lit up in purple. [BUSAN CITY]


The festive mood was not over even after the concert ended. A BTS drone show  took place above Gwangan Bridge, and Lotte World Adventure Busan held an after-party the night of the concert, which saw ARMY members dance to BTS songs until 3 a.m. Another after-party is set for Sunday night. Until Oct. 31, the amusement park will be lit up in purple and will have laser and firework shows set to BTS songs. Purple-themed food and beverages will be available inside the park.