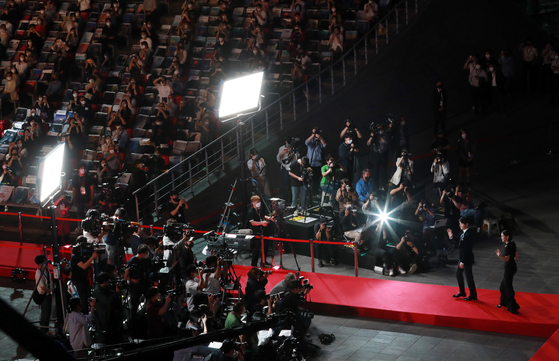 Actors Song Joong-ki, front, and Park So-dam greet the cameras from the red carpet of the opening ceremony of the 26th Busan International Film Festival to host the event on Oct. 6. [YONHAP]


Busan, which is currently the talk of the town as K-pop sensation BTS is scheduled to hold a free one-day live concert in the city for some 100,000 fans on Oct. 15 to support Busan’s bid to host the World Expo in 2030, has another annual international event that it has to wrap up before ARMY worldwide gather at the southeastern port city: The 27th Busan International Film Festival (BIFF), to be held this year from Oct. 5 to 14.

Even in spite of the Covid-19 pandemic, the 25th edition in 2020 was carried on in a scaled-down hybrid format of online and offline events. Last year, the opening ceremony held on Oct. 6 was the first in-person international event in Korea with over 1,000 participants — complete with the usual flourish of red carpet events at the Busan Cinema Center, brightening the city with fluorescent lights.

It has long been known that the city is an international hub for cinema as global cineastes flock to Busan every October to enjoy one of the biggest international film festivals in Asia.

The festival also signifies a sort of starting point for numerous actors and filmmakers at the beginning stage of their careers, as the festival provides a chance for rookie cineastes to introduce and promote their films to the international audience. 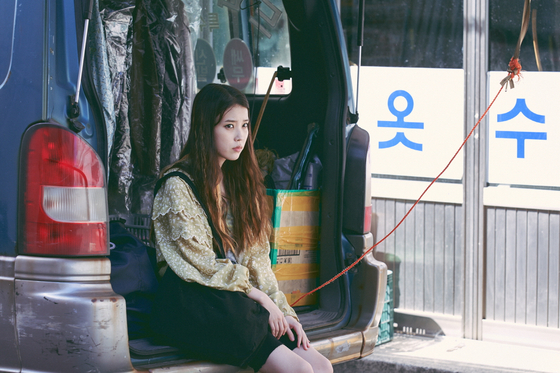 
The city, however, has now become a mecca for filming as well. Just this year, three Korean-language films that were invited to the Cannes International Film Festival — “Decision to Leave” by Park Chan-wook, “Broker” by Hirokazu Kore-eda and “Hunt” by Lee Jung-jae — had scenes shot in Busan.

At the festival, “Decision to Leave” took home the Best Director award for Park, and “Broker” claimed Best Actor for actor Song Kang-ho.

“Busan is a good city in which to make films,” Park had said at an online press interview back in June. “I think I had portrayed the film’s narrative better because I shot in Busan. Personally, I love working in the city.”

As much as Park’s “Decision to Leave” is about the love and romance between a man and a woman, the filmmaker had put emphasis on the scenery and the locations to represent their emotions: Moviegoers with a keen eye would be able to spot familiar places in Busan, as the first 90 minutes of the film were set mostly in the city. Park shot at 23 places in Busan including Busan Cinema Studios, Mount Geumjeong and National Korea Maritime & Ocean University. 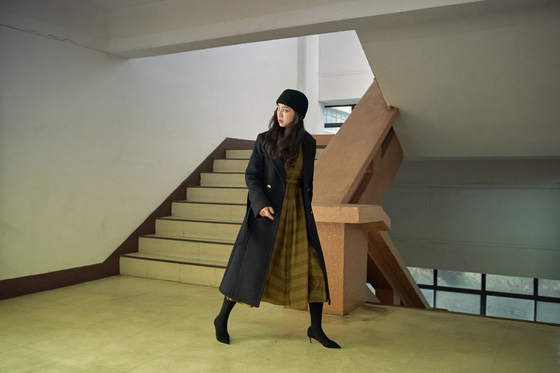 In director Park Chan-wook’s “Decision to Leave,” the first 90 minutes of the narrative is set in Busan. [CJ ENM]


Park’s comments about the city sum up its charms: “In Busan, there are mountains, hills and the sea. The city is perfectly suitable for creating films. I really like working in Busan — there are [plenty of] delicious meals to enjoy, too.”

For “Broker,” Kore-eda has repeatedly mentioned in local press events and interviews that the envisioning of the narrative for the film began in Busan as he met Song at BIFF a few years back. The film was shot in 13 locations throughout the city last year including Yeonsan-dong, Jeonpo-dong and Dadaepo beach. Busan marks the beginning of the journey for the three main protagonists, a road movie which has the trio travel from the southern port city to Seoul.

“Hunt,” which was the directorial debut of “Squid Game” star Lee Jung-jae, was shot in 17 places including Busan Cinema Studios, Busanjin Station and Busan University of Foreign Studies. The scenes of Busan in “Hunt” surprised the audience for not appearing as the city itself but as the streets of Tokyo in the 1980s as the North and South Korean National Intelligence Service (NIS) agents fire shots at each other for the completion of their respective missions. 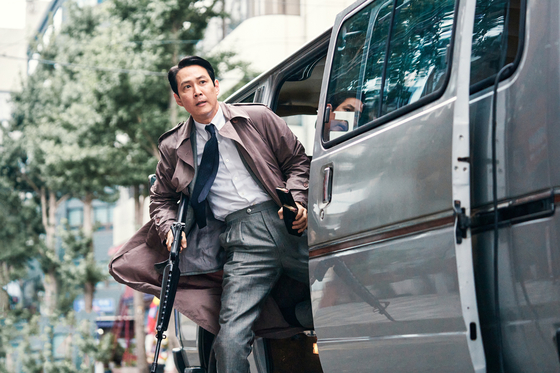 In director Lee Jung-jae’s “Hunt,” the setting of the streets of Tokyo of the 1980s were actually shot in Busan. The actor is also an honorary ambassador for the World Expo 2030 Busan. [MEGABOX PLUS M]


The shoot-out scenes were shot in Jungang-dong and Chorayng-dong, neighborhoods that still have a lot of buildings intact that were built between 1970s and ’80s, which fit perfectly with the periodical background of the film.

According to Busan Film Council, a total of 57 films and video productions were shot in the city in the first half of 2022 — and statistics show that the number has steadily been on the rise. Last year during the same period, the number was 51, and in 2019, before the Covid-19 pandemic, the number was 42.

At Busan Cinema Studios, which is considered to be a central hub for film production, a total of 187 films have been shot in the studio over the last 21 years since its establishment, including five films which surpassed the local box office milestone of 10 million ticket sales — “TaeGukGi: Brotherhood of War” (2004) by Kang Je-kyu, “Haeundae” (2009) and “Ode to My Father” (2014) by Yoon Je-kyun, “Train to Busan” (2016) by Yeon Sang-ho and “A Taxi Driver” (2017) by Jang Hoon. 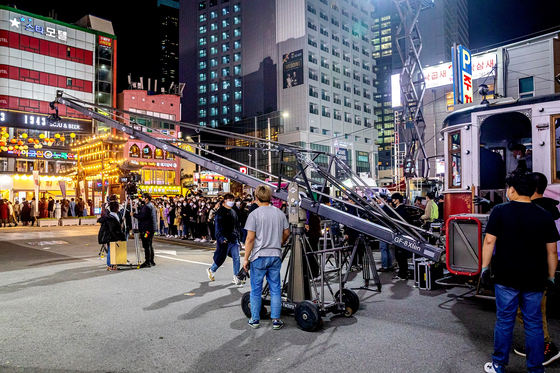 A shooting set of SBS drama series “The King: Eternal Monarch” (2020) starring Lee Min-ho and Kim Go-eun, which was filmed in Busan. In the series, the capital of Korea is set in Busan. [BUSN FILM COMMISSION]


“Not only films, but original series for streaming services are also booking reservations to film in the studios,” Kim Yoon-jae, the head of the studios, told the Korea JoongAng Daily. “The high-tech cameras and technologies offered in the studio are rising in demand by content companies, parallel to the increasing demands for a variety of genres and content formats both in films and also expanding over to streaming platforms.”

The studio’s motion capture technologies were used in Korea’s first-ever space opera Netflix film “Space Sweepers” (2021), and its 3-D scanners, which can quickly and precisely model the vast location sets which can be hard to attain in photos and videos, was used in “Decision to Leave.” 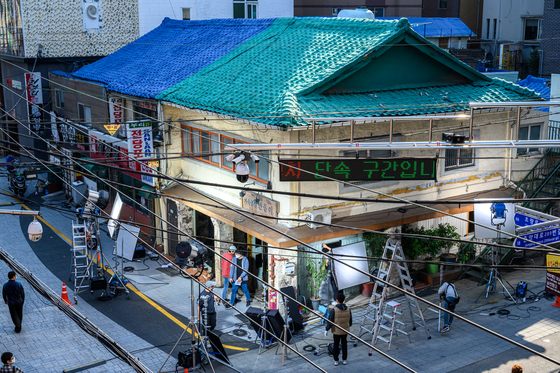 A shooting set of the film “Waiting for Rain” (2021) starring Kang Ha-neul and Chun Woo-hee was filmed in Choryang-dong, Busan. [BUSN FILM COMMISSION]


According to film insiders, the city’s reputation as the cinematic hub of Korea wasn’t built in a day. Busan Film Commission, which was established as the first-ever organization in Korea to support film production, has played a crucial role in strengthening the content industry — expanding production-related infrastructure such as the Busan Cinema Studios and establishing an efficient system to support and connect filmmakers to provide them with adequate locations for filming.

The city is also home to Busan Asian Film School and Korea Academy of Film Arts, the latter having fostered now-film auteurs such as Im Sang-soo, Bong Joon-ho, Choi Dong-hoon and some other 700 talents and playing a crucial role in activating the start of the new era of the global craze for Korean content. 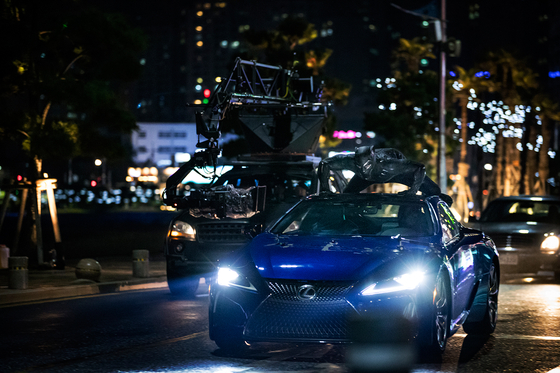 A shooting set of Marvel’s “Black Panther” (2018), which was shot in Busan’s major landmarks including Jagalchi Market, the largest seafood market in Korea and Haeundae District which was filmed between March and April 2017. [BUSN FILM COMMISSION]