Catch every game this Chuseok with our holiday TV guide

Catch every game this Chuseok with our holiday TV guide 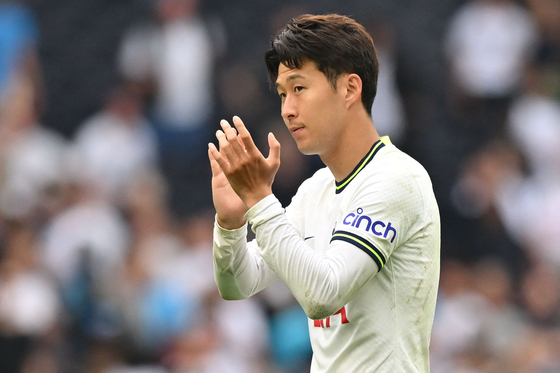 Olympiacos vs. Nantes — Friday, 4 a.m.
Early risers can start the Chuseok holiday off with some Europa League action as Hwang Ui-jo and Hwang In-beom help Olympiacos kick things off with a midweek game against French side Nantes.
Watch: SPOTV NOW


Napoli vs. Spezia — Saturday, 10 p.m.
The Monster will be back in action on Saturday as Napoli look to continue their lossless start to the season with another solid outing.
Watch: SPOTV NOW 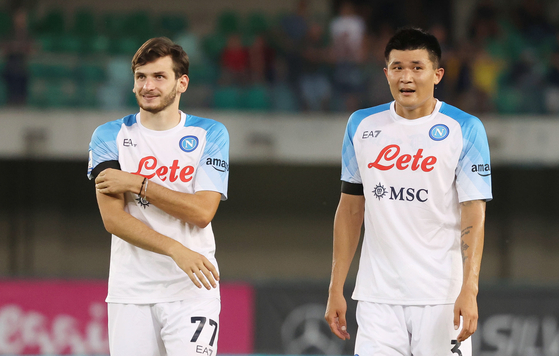 Napoli’s Kim Min-jae, right, and Khvicha Kvaratskhelia celebrate at the end of a Italian Serie A match against Hellas Verona at Marcantonio Bentegodi stadium in Verona, Italy on Aug. 15. [EPA/YONHAP]


Mainz vs. Hoffenheim — Saturday, 10:30 p.m.
A win this week could see Lee Jae-sung and Mainz jump into the top four in the Bundesliga with just one loss so far this season.
Watch: tvN SPORTS

Tottenham vs. Manchester City — Sunday, 1:30 a.m.
Son Heung-min is still without a Premier League goal this season, so Sunday’s tough matchup with Man City could be a crucial chance for the reigning Golden Boot winner.
Watch: SPOTV NOW

Mallorca vs. Real Madrid — Sunday, 9 p.m.
Few Korean players have got off to a more exciting start than Lee Kang-in, although extending his offensive point streak to four games will be a tough challenge against Spain’s top club.
Watch: SPOTV NOW

Olympiacos vs. Volos — Monday, 12:30 a.m.
The two Hwangs will be back in action on Monday as Olympiacos eyes a jump up to first place in the Greek Super League.

Freiburg vs. Monchengladbach — Monday, 12:30 a.m.
Jeong Woo-yeong only has one Bundesliga start to his name so far this season, so Monday’s game against middle-of-the-table Monchengladbach could be a chance for him to rack up a few more minutes.
Watch: tvN Sports


Jeonbuk vs. Daegu — Saturday, 2:00 p.m.
The Jeonbuk Hyundai Motors are looking for as many wins as they can bag as the regular season enters its last month. As of press time, Jeonbuk has been on a winless streak of three matches.
Watch: JTBC G&S

Gimcheon vs. Jeju — Saturday, 2:00 p.m.
Jeju is currently in the top six while Gimcheon is in the bottom six. However, their head-to-head record is tied at 1-1. In May. Jeju beat Gimcheon 3-1 then in July, Gimcheon beat Jeju 4-0.
Watch: IB Sports

Seongnam vs. Gangwon — Saturday, 4:30 p.m.
Seongnam may have found their form after beating top club Ulsan on Sept. 4. They are currently last and will be looking for a precious three points to avoid relegation at the end of the season.
Watch: skySports

Seoul vs. Suwon FC — Saturday, 7 p.m.
If Suwon FC can beat Seoul, they will go two-for-two after beating Seoul 4-3 in July. Suwon’s Lee Seung-woo leads the club with 11 goals this season as of press time.
Watch: skySports 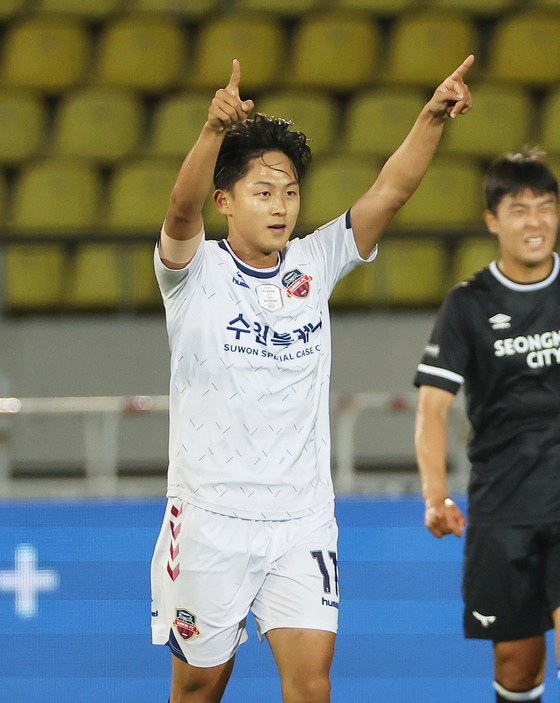 Lee Seung-woo celebrates during a game between Suwon FC and Seongnam FC in Seongnam, Gyeonggi on Aug. 28. [YONHAP]


Ulsan vs. Pohang — Sunday, 4:30 p.m.
Top club Ulsan look to extend their lead but will also be looking for some redemption after being shutout 2-0 by bottom club Seongnam on Sep. 4. The last time the two clubs faced each other on July 2, the Steelers won 2-0.
Watch: skySports

Incheon vs. Bluewings — Sunday, 7:00 p.m.
A home advantage could give the Bluewings the edge over Incheon, as the two clubs have each won one and drawn one in the last three times they faced each other.
Watch: JTBC G&S

The SSG Landers still hold on to a comfortable lead at the top of the KBO and the two-game series against the Kia Tigers is unlikely to do much to dislodge the Incheon side. Their closest challenges, the second-place LG Twins and the third-place Kiwoom Heroes, however, have to contend with each other, a fixture that can only benefit the Landers.
Watch: KBS, SBS, MBC, SPOTV2 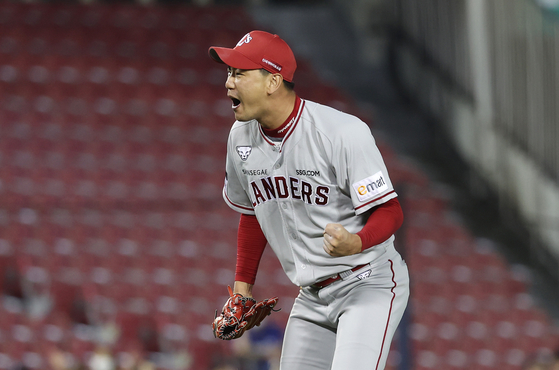 Kim Kwang-hyun of the SSG Landers reacts during a game against the LG Twins at Jamsil Baseball Stadium in southern Seoul on Wednesday. [YONHAP]

The Heroes and the fourth-place KT Wiz provide the most exciting matchup over the weekend, with only half a game separating the two sides as of press time Wednesday. The NC Dinos and Lotte Giants also offer an interesting series, with both sides still chasing an outside shot at knocking the Tigers out of fifth place.
Watch: KBS, SBS, MBC, SPOTV2 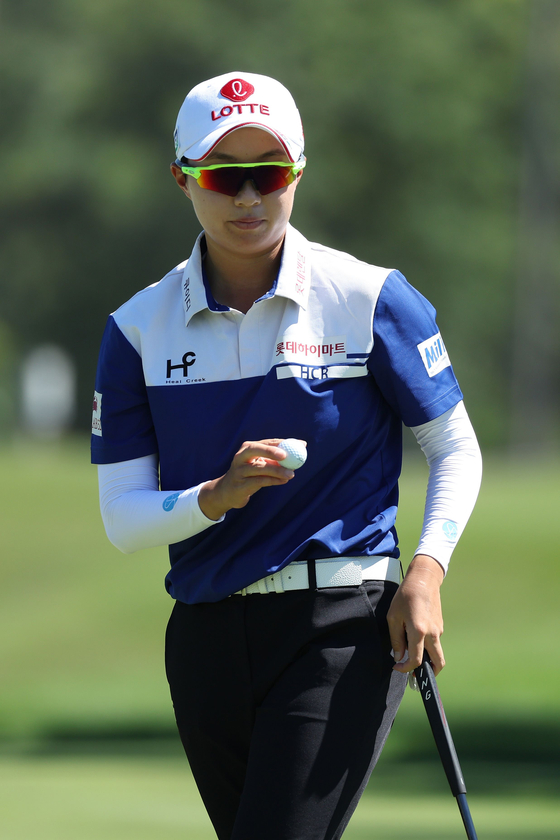 Kim Hyo-joo reacts after finishing her first round at the Dana Open at Highland Meadows Golf Club in Sylvania, Ohio on Sept. 1. [AFP/YONHAP]

KPGA: Shinhan Donghae Open  — Thursday to Sunday
This year is the 38th edition of the Shinhan Donghae Open and Seo Yo-seop is the defending champion. The tournament moves to Japan this year, where PGA golfer and newly-appointed member of the Presidents Cup team Kim Si-woo will join the KPGA players on Thursday.
Watch: JTBC Golf

Padres vs. Dodgers — Saturday to Monday
After an explosive July and a solid August, Kim Ha-seong looked to be starting to slow down a bit in the first week of September. But the Korean utility player has already started to pick up the pace with a home run on Tuesday and will look to carry that momentum into a tough weekend with the Dodgers.
Watch: SPOTV NOW 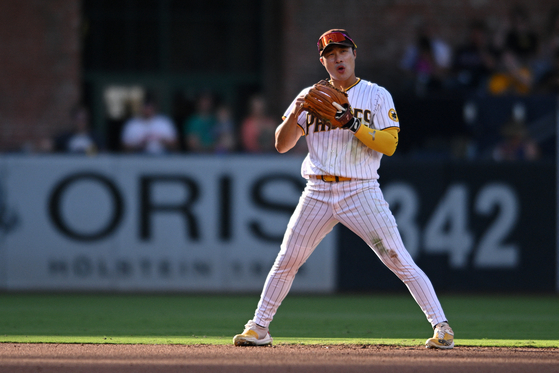 
Rays vs. Yankees — Saturday to Monday
The top two sides in the AL East face off over the weekend, but whether Choi Ji-man will see much action remains unclear. The Korean slugger has so far only appeared in two games this month, picking up no hits in eight at-bats.
Watch: SPOTV NOW 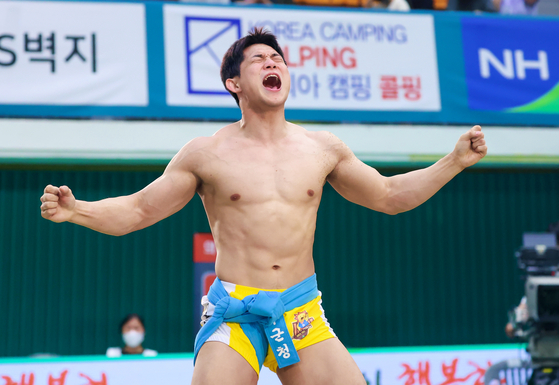 If you’re looking for something a little more traditional this holiday season, the Chuseok Ssireum Contest is running from Wednesday to Monday at Goseong-gun National Sports Center in Goseong, south Gyeongsang.

Ssireum, a form of traditional Korean wrestling, has strong ties to Korean traditional holidays like Lunar New Year and Chuseok, and local tournaments are held across the country during the holiday season.

These tournaments operate on a last-man-standing basis. Contestants enter the ring until one forces the other’s upper body to touch the ground. That person is then eliminated and another challenger enters the ring.

The last man standing when all challengers are defeated is the winner.

A total of 248 athletes will take part in the 2022 tournament. It will be the first time in two years that the event will be held with an audience due to Covid-19.

The different weight classes will be spread throughout the holiday period, starting with women’s and team events held on Thursday.