[CELEB] Lapillus has been keeping busy since its debut

[CELEB] Lapillus has been keeping busy since its debut 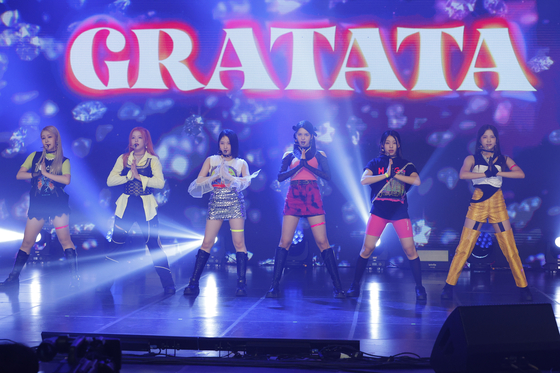 
Three months after its debut, Lapillus is back with new music. The girl group held a showcase introducing its new EP “Girl’s Round Part.1” on Thursday at Konkuk University’s New Millennium Hall in eastern Seoul.

The six members — Shana, Haeun, Seowon, Yue, Bessie and Chanty — performed their new lead track “Gratata” (stylized in all caps) and sat down to discuss the new release.

The group’s name “Lapillus” is a gemstone that changes colors depending on the direction of the light, according to members, signaling the group’s message to find its own unique style.

After debuting in June with the digital single “Hit Ya!,” the members say that this time they wanted to show a different side. 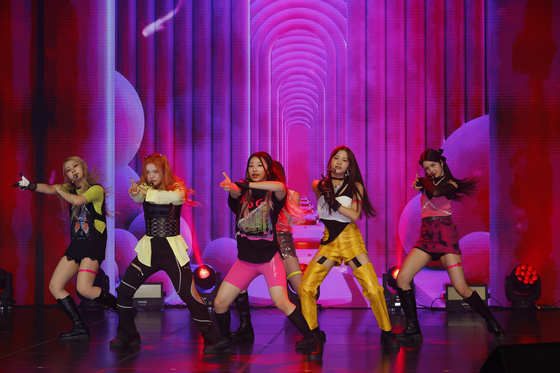 “Gratata” is a dance number with a heavy bass line and confident lyrics that go, “I just do things my way and everyone is surprised.”

“It’s about stacking up our dreams and taking a shot,” said Bessie. “Please pay attention to how we sing ‘gra-ta-ta’ like the sound of a machine gun.”

“While ‘Hit Ya!’ took on a very strong attitude because it was all about showing our ambitions upon debut, ‘Gratata’ feels more enjoyable like a festival,” said Seowon. 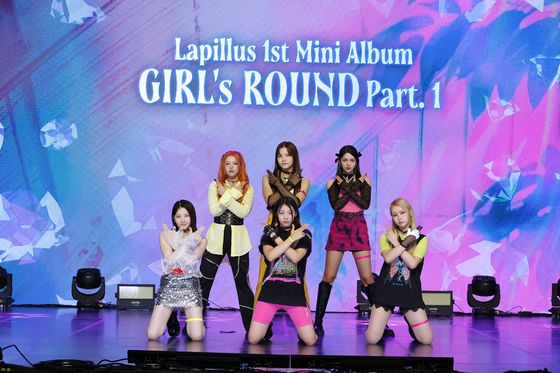 
While the new song features much higher notes than the debut song, its shooting-inspired choreography is just as challenging.

“We got so eager today, I think we danced even more intensely than we did during practice,” said Haeun, the 13-year-old member who is currently the youngest singer in the K-pop idol scene.

It has been only 95 days since Lapillus’s debut but the group has kept busy meeting its international fans. Earlier this month, the girl group headed to the Philippines — member Chanty’s home country — for an 8,000-person fan meet and greet.

“I was so grateful to see how much love Lapillus is receiving,” said Chanty. “Funny thing is, although I’ve only been in Korea for a year and am still working on my Korean, it’s been a while since I’ve been to the Philippines, so everyone speaking Tagalog felt so strange!” 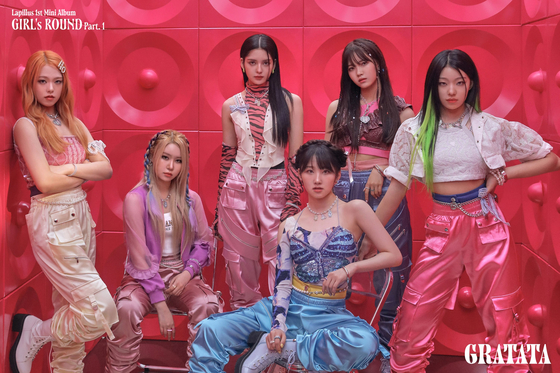 
Thanks to the fervent support from her home country, the six members of Lapillus were appointed as honorary ambassadors of Philippine’s northern province of Ilocos Sur last week.

“We were thankful to make a lot of appearances on Filipino television shows,” said Shana. “It’s an honor to have been appointed as honorary ambassadors of Ilocos Sur. We’re planning to host more events abroad in the future. Los Angeles is next!” 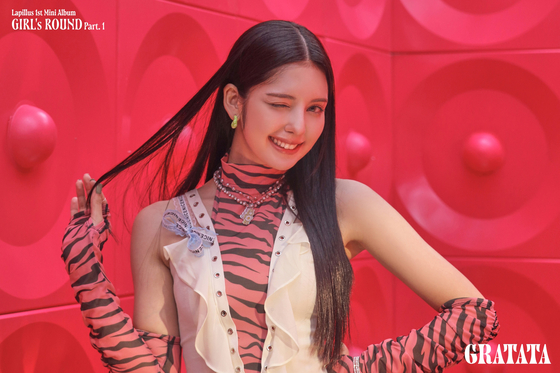 
At the time of their debut, Shana and Chanty were already known to the public: Shana as a contestant on the Mnet audition show “Girls Planet 999” (2021), and Chanty as a popular teen actress and model in her home country with a successful four-year career already.

Chanty, who was born in the Philippines to an Argentinian father and Filipino mother, is the first-ever K-pop idol of either Filipino or Argentinian descent. 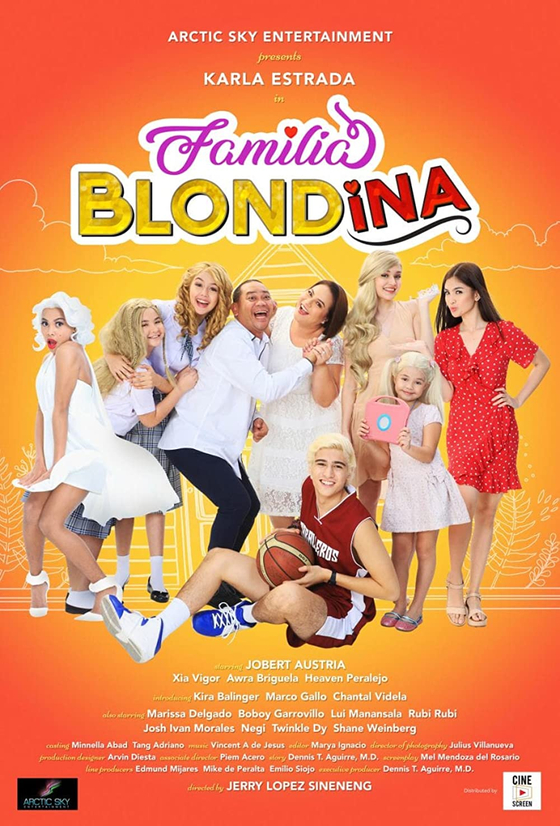 Chanty was already known as a popular teen actress in the Philippines, appearing in shows “Familia Blondina” (2019), above, “Spirits: Reawaken” (2018) and more. [ARCTIC SKY ENTERTAINMENT]


Chanty has had a unique career, first debuting in 2018 in a role in the Filipino television series “Spirits: Reawaken.” 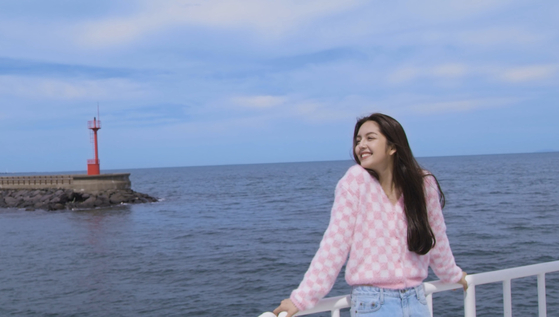 Before debuting as a member of Lapillus, Chanty made her first appearance in the K-pop scene in 2021 in the music video for Korean R&B duo JT&Marcus’s debut song “Dear you.″ [MLD ENTERTAINMENT]


Prior to her official debut as a member of Lapillus, Chanty made her first appearance in the K-pop scene in 2021 in the music video for Korean R&B duo JT&Marcus’s debut song “Dear you.” She then appeared in singer Lylian’s music video for “Every moment” (2022).

“Girl’s Round Part.1” also features lead track “Burn With Love” as well as three other songs. The EP will be available on music streaming platforms from 6 p.m. on Thursday. 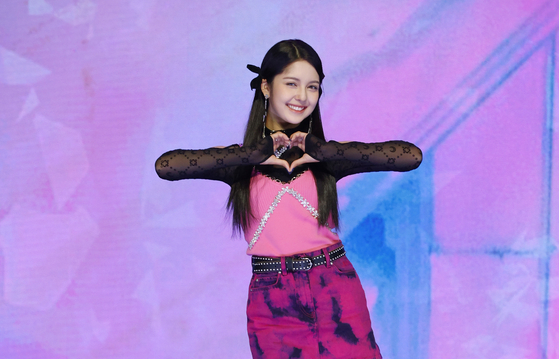 Chanty, a Filipina-Argentinian, originally debuted in 2018 as an actor through the Filipino television series “Spirits: Reawaken.” She starred in popular local shows including “Familia Blondina” (2019) and “Starla” (2019-20) before making her first appearance in the K-pop scene in 2021, starring in Korean R&B duo JT&Marcus’s music video. She officially debuted in Korea as a member of girl group Lapillus in June 2022 with the single “Hit Ya!”

This information was confirmed by MLD Entertainment on Sept, 20, 2022.