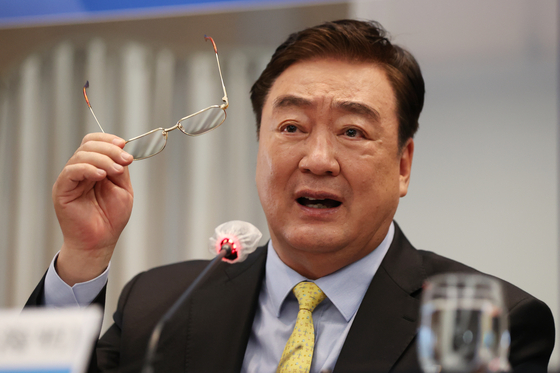 Xing Haiming, the Chinese ambassador to Korea, speaks at a press conference organized by the Kwanhun Club at the Korea Press Center in Seoul on Wednesday. [NEWS1]

China’s envoy in Seoul said Washington should mind its own business when it comes to Taiwan affairs on Wednesday.

“We will never acknowledge Taiwan’s independence,” said Xing Haiming, the Chinese ambassador to Korea, at a press conference at the Korea Press Center in central Seoul. “And we will not accept any external parties’ attempts to get involved in the matter.

“If any external party does try to get involved,” Xing added, “China will not hesitate to resort to all possible measures to respond.”

Taiwan has been in the headlines after a trip by U.S. House Speaker Nancy Pelosi in August, and U.S. military and diplomatic officials have hinted that South Korea could be expected to work with the United States to defend Taiwan.

Xing’s press conference, organized by the Kwanhun Club, an association of journalists, came a week after U.S. Ambassador to Korea Philip Goldberg spoke at the center.

“I don’t accept that assessment,” Xing said, in response to a question from a journalist Wednesday. “Are we supposed to report our efforts to the United States? We have our own positions and ways to manage our foreign relations.”

China, with Russia, vetoed a U.S.-drafted resolution at the United Nations Security Council in June that would have imposed a new set of sanctions on North Korea, marking the first division among the five countries with veto power on the Security Council on a sanctions resolution on the North.

Xing said that China is not “turning a blind eye” to Pyongyang’s military provocations.

“China does not want any accidental military contingencies to take place on the Korean Peninsula, so of course we want all parties involved to continue to engage in dialogue for denuclearization [of North Korea],” Xing said.

On South Korea’s increasingly difficult position between the China and the United States, Xing emphasized that Beijing has “never asked Seoul to pick a side,” but added that Seoul “had better think through” the effects of some U.S. policies on Korea recently, possibly alluding to the Inflation Reduction Act (IRA) that’s expected to hurt Korean electric vehicle (EV) makers.

“With their recent decision affecting the EV market, can one really say the United States was looking out for Korea?” Xing said.

“The Americans think they are a people chosen by God, and operate on the basis of American exceptionalism and America-first policy,” he added. “If a country, even one of close alliance with the United States, do not follow the American values and system, they deem these actions wrong and show no mercy in retaliating against them. I think many Koreans know what I am talking about.”

Goldberg also addressed the IRA issue during his meeting with the press last week.

“With regard to the Inflation Reduction Act, Korea has voiced serious concerns about electric vehicle incentives outlined in the legislation, and we are committed to continuing discussions on ways to address them,” he said.

Xing, known for his straightforward and often biting comments in interviews, also addressed several issues that have for years challenged Beijing-Seoul ties, such as the U.S.-led antimissile system installed in Korea, the Terminal High Altitude Area Defense (Thaad) system.

“Our position has not changed on Thaad,” Xing said. “The system is a threat to China. The United States has broken the balance of power in the region by installing it in Korea.”

He dismissed a recent controversy over former President Hu Jintao’s dramatic exit from the Chinese Communist Party Congress as nothing more than a simple misunderstanding.

“The media reports have been completely skewed,” he said. “[Hu] is an aged man. He had to step outside for a break. That was all there was to it.”