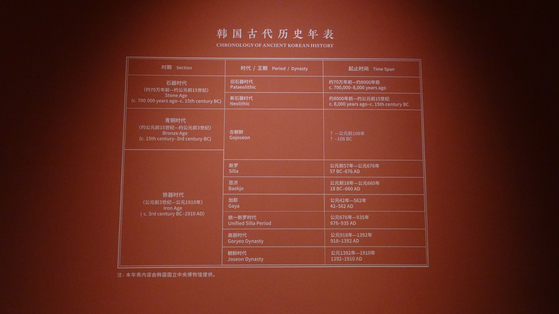 
The National Museum of China in Beijing has decided to remove the controversial chronology table of ancient Korean history that excludes Korea’s ancient kingdoms — Goguryeo (37 B.C.-A.D. 668) and Balhae (A.D. 698-926) — from its current exhibit, the National Museum of Korea announced Thursday.

The Chinese museum’s decision is in response to the National Museum of Korea’s final warning it sent out Thursday morning, demanding the Chinese museum correct the chronology table it modified “in an attempt to distort history” or else Korea will have no choice but to withdraw the relics it sent over for the exhibition.

The exhibition, titled “Auspicious Metals from the Orient: Ancient Bronzes of China, Korea and Japan,” has been jointly organized by the national museums of Korea, Japan and China to mark their trilateral relationship and commemorate the 30th anniversary of diplomatic ties between Korea and China. The National Museum of Korea sent 15 relics to China for the joint exhibit, including several national treasures like the Bell of Cheonheungsa from the Goryeo Kingdom.

The National Museum of Korea said the Chinese museum finally responded to their request on Thursday afternoon.

“We received an email from the National Museum of China that it will take down the entire chronology table on Korea’s ancient history today,” the National Museum of Korea said in a statement. “The Chinese museum also added that it hopes to collaborate with Korea in an amicable manner and strengthen communication so that it benefits both countries.”

The National Museum of Korea said that it provided a “proper table” for the exhibit on June 30, but the Chinese museum removed the two ancient Korean kingdoms that it has been claiming sovereignty over.

Korean historians are criticizing the National Museum of Korea for its delayed response. The museum became aware of the issue only after an exclusive report by the JoongAng Ilbo, an affiliate of the Korea JoongAng Daily, on Tuesday.

The museum said it deeply regrets what has happened and said it immediately sent official requests to make modifications to the table and demanded an apology.

An official from the National Museum of Korea said it’s “international practice to faithfully reflect the materials provided in such circumstances” and that the museum is “deeply concerned that such attitude from China undermines their relationship.”

Korea has been accusing China of distorting history ever since the so-called Northeast Project, which was a state-funded historical research project conducted by the Chinese Academy of Social Science between 2002 and 2007. It claimed that ancient Manchurian and Korean kingdoms were regional governments of the ancient Chinese empire — attempting to incorporate parts of Korean history, the Goguryeo Dynasty for example, into its own history. While the project officially took place from 2002 to 2007, the historical and cultural disputes it sparked are still very much alive. In 2013, when China was opening an exhibition center displaying relics of Goguryeo, the museum failed to provide any explanation about Goguryeo’s link to the Korean Peninsula.