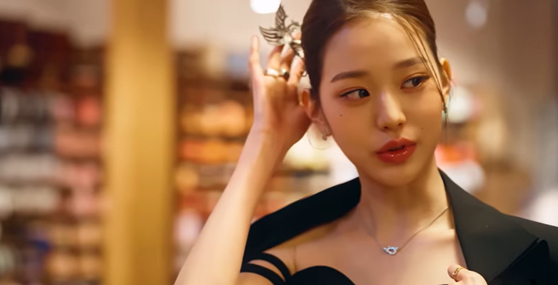 
Chinese netizens are once again creating a stir online, arguing that a Korean celebrity has stolen Chinese culture. The item at the center of controversy this time is a phoenix binyeo, or hairpin.

On Oct. 16, Vogue Korea posted a video clip of Jang Won-young, a member of K-pop girl group IVE, who was attending Paris Fashion Week. In the video, she talks about her fashion and hairstyle. She said she wanted to do an up style with her hair because it goes well with her outfit. She then introduced the binyeo she was wearing.

“I wanted to show off the beauty of Korea, so I brought this binyeo all the way here from Korea,” she said. The binyeo she was wearing had a phoenix design, a common design worn by Korean queens and princesses during the Joseon Dynasty (1392-1910).

A Chinese influencer who has about 480,000 followers criticized Jang online saying that “since the ancient times, dragons and phoenixes have been unique symbols of the Chinese people. Although Koreans used binyeo from a long time ago, Koreans can’t claim that the phoenix binyeo is theirs.”

Known as bongjam, a phoenix shaped binyeo is a traditional Korean hairpin that’s been widely used by the royal families in the Joseon era, along with yongjam, a dragon shaped binyeo, and ddeoljam, a binyeo with multiple flower shapes, a bat, a butterfly and a bird.