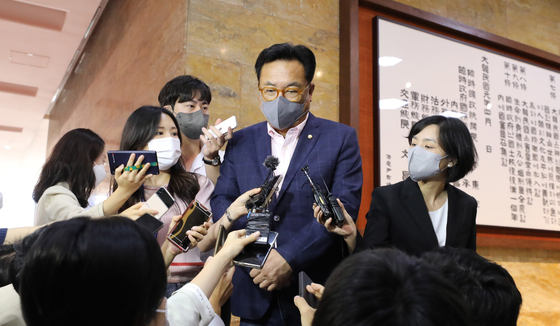 Chung Jin-suk, center, the parliamentary deputy speaker who was named as the new interim leader of the People Power Party (PPP), speaks to reporters at the National Assembly in Yeouido, western Seoul, Thursday. [JOINT PRESS CORPS]


Chung Jin-suk, deputy speaker of the National Assembly, became the new interim chief of the People Power Party (PPP) Thursday and is now tasked with bringing together his party which has faced weeks of turmoil over a leadership vacuum.

The five-term lawmaker, who is known as a close ally of President Yoon Suk-yeol, was approved as chair of the PPP’s new emergency steering committee in a motion passed by the national committee meeting Thursday afternoon.

Rep. Yoon Du-hyun, vice chair of the national committee, presided over the meeting in place of Rep. Suh Byung-soo, who resigned in opposition to the launch of a new emergency committee last week.

The members of the emergency steering committee are expected to be selected after the Chuseok holiday which begins Friday and ends Monday. This will complete the launch of the new interim leadership.

“I will be thinking about the appointments over Chuseok, and I will announce it right after the holiday is over,” Chung told reporters Thursday.

A native of Gongju in South Chungcheong, Chung started his career in journalism and served as a senior presidential secretary for political affairs in the Lee Myung-bak government from 2010 to 2011.

In April, Chung led then President-elect Yoon’s delegation to Tokyo and delivered a letter from Yoon to Japanese Prime Minister Fumio Kishida.

Chung’s term as deputy speaker runs through this year. It is unclear if he will continue to hold this position, in addition to interim chief of the PPP.

Chung was at first hesitant to accept the position and agreed only after three offers, according to floor leader Kweon Seong-dong.

“I am very sorry to the party members and the people for the current chaos within the party,” Chung said in a press conference Wednesday.

“I would like to erase the party’s internal conflict and division over the past few months with an eraser if I could,” he said, adding that he finally accepted the chairmanship offer because he thought it couldn’t be “avoided anymore.”

He then promised to “stabilize the party for the success of the Yoon Suk-yeol administration.”

Park Joo-sun, a former deputy speaker who had been associated with the liberals, was initially selected by the PPP as its new chair candidate. The former four-term lawmaker who hails from South Jeolla was seen as a figure who could work with the liberal Democratic Party (DP), as the DP holds a majority in the National Assembly.

Park, a former prosecutor who has reportedly been supported by Yoon as a figure who could help with his vision of national unity, however, turned down the offer.

The ongoing feud between Lee and the PPP faction of Yoon’s allies does not appear to be winding down as the former chairman has forecast more court injunctions against the PPP are on the way.

In early July, the PPP’s ethics committee suspended Lee’s party membership for six months over allegations that he accepted sexual bribes from a businessman in 2013 and later abetted in a cover-up attempt.

The PPP launched a new emergency leadership committee on Aug. 16, effectively ousting Lee as the party chief. Lee in turn filed several lawsuits against the party and cried foul at members of the PPP close to Yoon.

On Aug. 26, the Seoul Southern District Court temporarily suspended the duties of Joo, chair of the PPP’s emergency steering committee, siding with Lee.

The PPP then declared its intention to launch a new emergency steering committee and revised its party charter earlier this week to clear the technical procedures.

While Chung has said he is open to meeting with Lee at any time, he told reporters Thursday regarding Lee’s threats of more legal action that the former chairman must “not cross the river of no return.”

Chung and Lee have clashed in the past, including over Lee’s trip to Ukraine in June. At that time, Chung accused Lee of using the trip to meet with Ukrainian President Volodymyr Zelensky for his own political purposes.

There has been criticism of appointing Chung as interim leader as he was seen as another one of Yoon’s close associates, though he has played down the label.

Floor leader Kweon, who had served as acting chief of the PPP until the new leadership was launched, also offered to resign in a press conference Thursday afternoon.

“I am here today to announce my intention to resign as the party’s floor leader,” said Kweon, who has faced pressure to step down amid criticism that he needs to take responsibility for his part in the chaos within the party.

“I humbly accept the criticism that my resignation comes too late,” he said. “But the normalization of the country and the success of the Yoon Suk-yeol administration have always taken precedence over my position.”

He said he will continue to work toward “healing of conflicts within the party.” 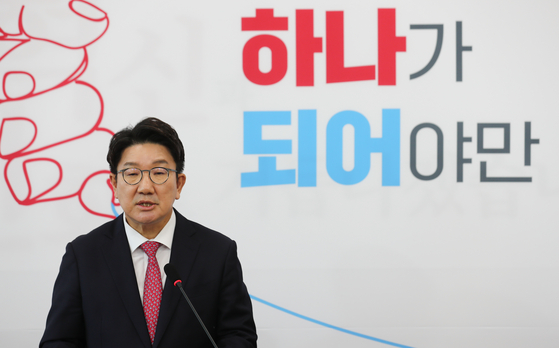 Rep. Kweon Seong-dong holds a press conference to announce he will resign as the the People Power Party floor leader at the National Assembly in western Seoul Thursday. [NEWS1]