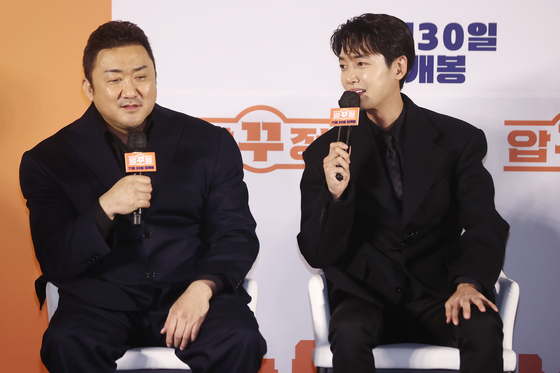 “Men of Plastic” tells of an ambitious businessman, portrayed by Ma Dong-seok, and a retired plastic surgeon, portrayed by Jung Kyung-ho, who pair up to create a lucrative plastic surgery empire in Apgujeong-dong, an upscale neighborhood in Gangnam District, southern Seoul.

During a press conference for the film on Thursday, Ma described the film as being full of great jokes and witty lines.

“There is a lot of word action going on, instead of physical action, which I am more used to doing,” said Ma in the press conference in Yongsan District, central Seoul. “My character in this new film tries to solve everything with words.”

“A lot of the lines in the film may seem like ad-libs, but they actually aren’t. Almost all the lines were actually in the script,” he said.

Ma was also part of the creative team for the upcoming comedy. He took park in planning, producing and adjusting the script for the big screen. He had been involved in producing films “Round Up” and “The Outlaws” as well.

“I decided to produce ‘Men of Plastic” because I wanted to experience making movies of various genres, and this one really seemed like a film that could help people de-stress and feel happy,” he said. “It’s overall a really fun film that even I had to try hard to not burst out laughing on set.”

Ma’s co-star Jung said that it was an honor working with the actor who he has been friends with for some 20 years now.

“Ma and I have known each other even before I made my debut as an actor, and finally getting to work with him was incredibly rewarding and a refreshing experience.”

Other actors in the film include Oh Na-ra as the head of the plastic surgery clinic’s consultation office and Oh Yeon-seo as the director of a high-end esthetic clinic.

“Men of Plastic” premieres in local theaters on Nov. 30.