Conference on migration and caregiving to be held in Seoul

Conference on migration and caregiving to be held in Seoul 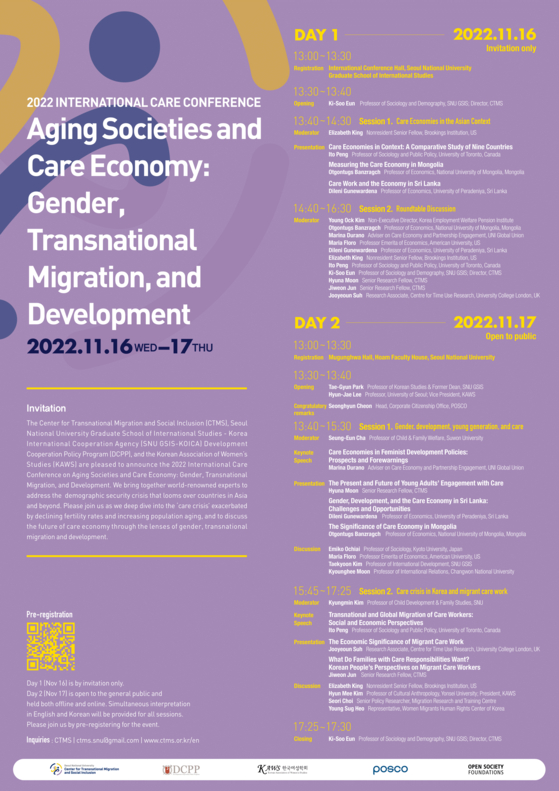 Experts on migration and caregiving will gather at Seoul National University in Gwanak District, southern Seoul next week to discuss aging societies and the future of the caregiving economy.

The 2022 International Care Conference, held next Wednesday and Thursday, will address the “demographic security crisis” looming over Asia that’s caused by falling fertility rates and aging populations, the university’s Center for Transnational Migration and Social Inclusion said in a statement on Thursday.

The hosts of the conference are the Center for Transnational Migration and Social Inclusion, Seoul National University’s Graduate School of International Studies-KOICA Development Cooperation Policy Program and the Korean Association of Women’s Studies.

The conference will include presentations on the reality of caregiving in Asian countries such as Mongolia and Sri Lanka, domestic demand for migrant caregiving workers in Korea and young people’s perspectives on the issue of caregiving, said the center.

Participants from overseas will include Maria Floro, an emeritus professor at American University who’s a scholar in the field of global caregiving economy; Elizabeth King, a senior research fellow at the Brookings Institution and the former vice president and chief economist at the World Bank; and Ito Peng, a professor at the University of Toronto and a leading expert in international migration and caregiving work in East Asia.