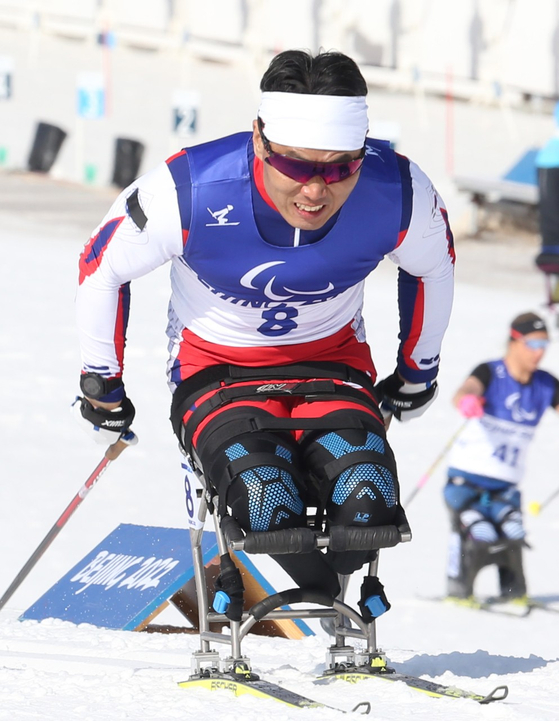 
Korea’s Shin Eui-hyun, Won Yoo-min and Jeong Jae-seok failed to qualify for the para cross-country skiing men’s sprint sitting competition on Wednesday, dropping out of a competitive field in the qualification race at Zhangjiakou National Biathlon Centre in Zhangjiakou, China.

The indomitable Shin was back on the snow for his fourth event of the Beijing Games, following reasonable attempts in the cross-country long distance sitting and the biathlon sprint and middle distance sitting events.

He finished just outside of qualifying in the cross-country sprint on Wednesday, finishing 14th with a real and final time of 2 minutes and 28.6 seconds, 14.43 seconds behind first place. With the top 12 racers advancing to the semifinals, Shin missed out on a chance to advance by less than 2 seconds.

Shin is one of the most decorated Korean Paralympic athletes ever. He is the only Korean ever to win a gold medal at the Winter Paralympics, having won gold in the 7.5-kilometer cross-country skiing sitting race at the 2018 PyeongChang Paralympics, and the only Korean ever to win two medals at a Winter Paralympics, having also won bronze in the 15-kilometer cross-country sitting event. He has also competed for Korea in both para ice hockey and para cycling.

Further down the table, Won and Jeong also missed out on a chance to advance in the men’s sprint.

There are three different medal contests in each skiing event: Visually impaired, standing and sitting. Within each event, athletes are classified based on their impairment, and the score takes these classifications into account.

Two-time Olympic medalist Cha leaves it all on the ice