CSR closes one chapter with new EP, but is ready to open another

CSR closes one chapter with new EP, but is ready to open another 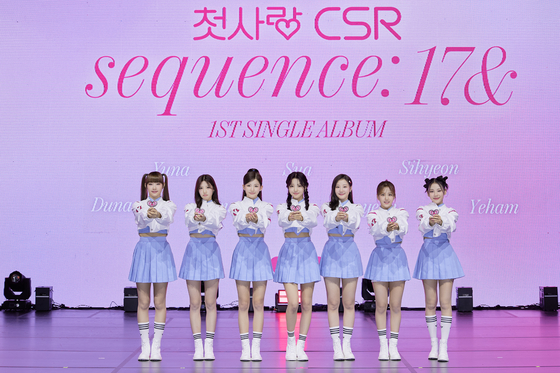 
CSR, a girl group whose name is an acronym for chutsarang, which translates to “first love,” is back with another EP that is reminiscent of a coming-of-age film.

Debuting earlier this year in July with the EP “Sequence: 7272,” which touched on subjects related to the excitement and bubbly feelings one has when falling in love, the septet continues the “Sequence” series with “Sequence: 17&.”

A few hours before its release, the girl group, which consists of Sua, Geumhee, Sihyeon, Seoyeon, Yuna, Duna and Yeham, performed live the lead track “♡TiCON” (pronounced “love-ticon”) and gave some insights into what first love truly brings to the table at Yonsei University’s Main Auditorium in western Seoul.

All the members are 17 years old.

According to the group, “Sequence: 17&” means that although its “coming-of-age chapter” has come to an end with the album, it will continue on with its “first love” concept.

“’17&’ symbolizes our new beginning for when we turn 18 next year,” Sihyeon said.

“♡TiCON” is a song filled with guitar sounds and a teen pop genre dance number. 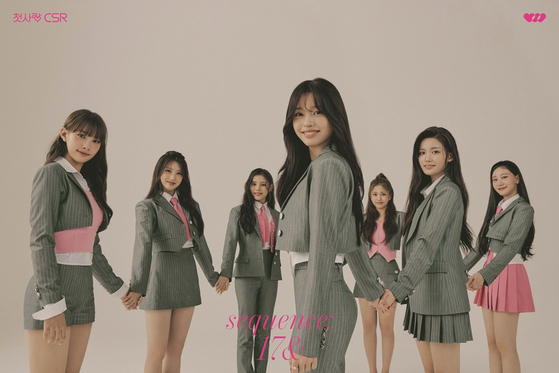 
“Simply put, it’s CSR’s own way of expressing our love in a straightforward way,” Duna said. “The title means an emoji that represents the many different emotions of first love.”

“If our debut song, ‘Pop? Pop!’ was about the thrills of love, ‘♡TiCON’ is about how love can make us whimsical,” Yeham said. “That’s why we showed a see-saw in our concept photos, because love tends to make us go back and forth.”

“Our debut album focused on the fluttery feelings, but now it’s all about being happy, then annoyed and even confused — all because of love,” Sua said. “We thought long and hard about how we were going to show this on stage, but rather realized that expressing all these complex emotions all at once would be even better to show a fresher performance.”

“Anding (&)” is about feeling gratitude toward a destined relationship — dedicated to CSR’s fans.

The group also shared some behind-the-scenes stories for the music video for “♡TiCON,” like how the members were told to film each other using a camcorder and had so much fun that at one point they had forgotten they were even in the middle of filming, Seoyeon said. 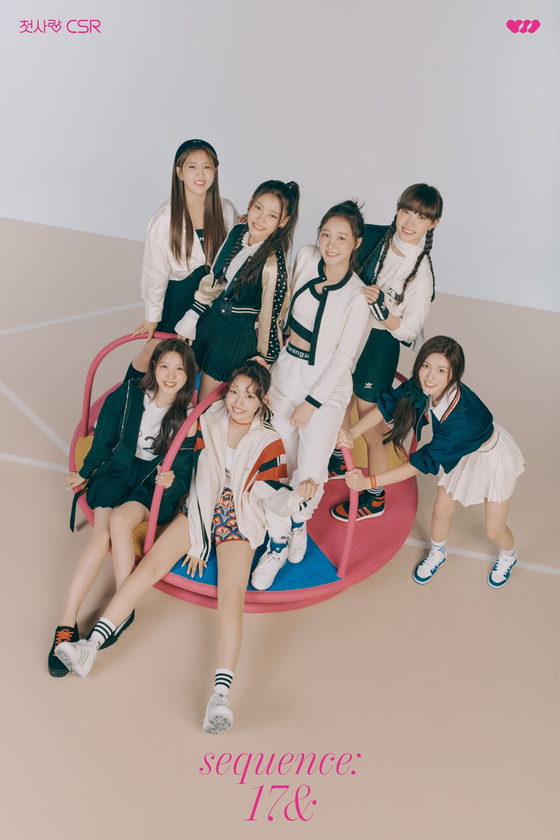 
CSR reminds many K-pop fans of the early days of disbanded girl group GFriend, in that both groups wore school uniforms on stage and sung about falling in love from a teenager’s point of view.

And when CSR covered a series of GFriend’s hit songs in a YouTube video earlier this week, the former members of GFriend were quick to praise their juniors on each of their social media accounts.

“This is so stunning. I’m a fan of CSR,” Sowon said, while SinB expressed her gratitude for CSR’s performance.

“Thank you for giving me the experience of being someone’s role model,” Yuju said. “They say that a first love stays in everyone’s hearts for a long time. I hope CSR is a team that warms the hearts of many people. Cheers to CSR, as well as every single member of CSR.”

CSR has previously said in interviews that the senior group is its idol and that it “wants to be like GFriend.”

“We have so much admiration for GFriend, so we hope to be able to shoot a challenge clip on social media with them,” Sua said.

As for what comes next for the group that is centered on the concept of first love, CSR was firm that it was ready for anything.

“Many people may think that a first love is only innocent and pure, but I actually think that there is much more to it,” Sua said. “First love can be associated with girl crush, or it can be sexy or cute. It’s different to everyone, so I believe that we are capable to try more.”