D.Camp aims to support Singaporean start-ups as they venture into Korea

D.Camp aims to support Singaporean start-ups as they venture into Korea 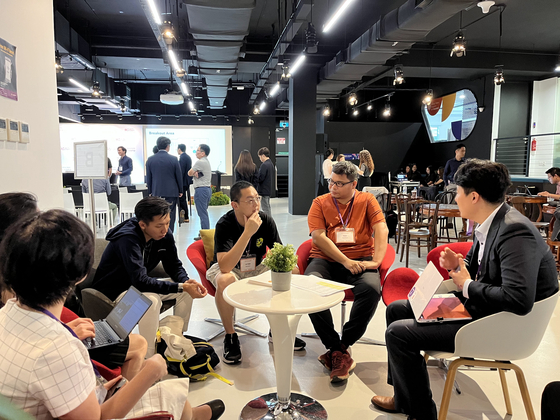 Start-up CEOs take part in the D.Camp meet-up on Tuesday at the Pixel event hall in Singapore. [D.CAMP]


SINGAPORE — The Pixel start-up incubating center in Singapore was bustling with local start-ups sitting down for consultations with Korean experts from the Banks Foundation for Young Entrepreneurs, or D.Camp, for a meet-up event on Tuesday.

Each with their own ideas and proposals, 25 start-ups looking to launch in the Korean market shared their hopes and fears on entering a heavily competitive country with less infiltration from overseas ventures with the managers and executives at D.Camp.

D.Camp is a non-profit start-up support organization funded by 19 banks. It plans to inject as much as 300 million won ($210,000) in start-ups operated by foreigners in the form of equity investment. To selected start-ups, additional perks like a free workspace in Seoul for at least six months and professional mentoring will also be provided.

The start-ups to be considered for investment will be selected through D.Camp’s own version of demo day called D.Day, where start-ups pitch their ideas in front of venture capitalists and investors to attract investments.

“There is definite growth in the Korean market, and the environment seems well-regulated by the government,” said JC Jawe, a trader, risk and relationship manager at blockchain start-up OpenRoad, during the session.

“I was in Korea last August for the Korea Blockchain Week, and the companies I met there were doing quite well, especially regarding cryptocurrency and trading. I’m convinced that we can come into the market and help Korean companies gain more exposure and international presence using our service.”

OpenRoad, a digital asset and stock-trading service seeking a seed investment, was one of many start-ups hoping to fill in the gaps in the Korean market yet unfilled by local companies.

Korea was a lesser-known country to Singapore until recently, when K-pop and other Hallyu (Korean wave) content started seeing a surge in demand following the onset of the pandemic. BTS filled 45,000 seats at the country’s National Stadium in a tour in 2019, and a Korea-Singapore co-produced film titled “Ajoomma” had its world premiere at the Busan International Film Festival this month.

Seeing that Korea has a thriving tech and manufacturing environment, but with less focus on sustainability and digital transactions than Singapore, start-ups in attendance saw an opportunity to help existing services become more efficient, rather than bringing their own breakthrough innovations. 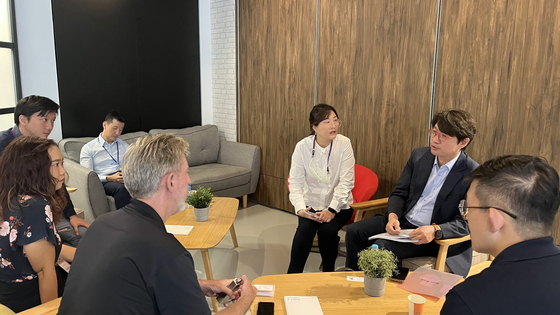 Singaporean start-ups seeking to launch in the Korean market sit down for a consultation with the Banks Foundation for Young Entrepreneurs, or D.Camp, at a meet-up event on Tuesday at Pixel, a start-up incubating space run by the Infocomm Media Development Authority (IMDA). At right is Kim Young-duk, chief executive of D.Camp. [D.CAMP] 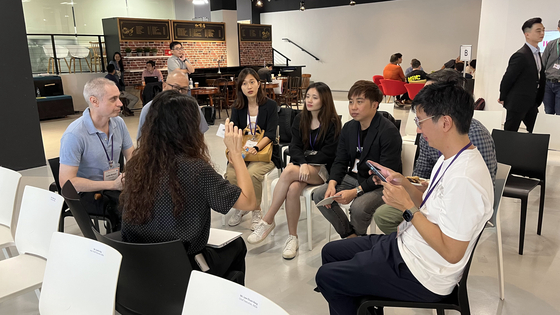 Start-up CEOs take part in the D.Camp meet-up on Tuesday at the Pixel event hall in Singapore. [D.CAMP]


“We are looking to the Korean market because we know that video consumption is very big there, and our main focus is livestreaming,” said Yongman Wong, assistant vice president of key account management at BeLive Technology.

BeLive is an interactive video service provider that has mashed up the livestreaming functions of YouTube and Instagram with interactive features that make it suitable for educational and shopping purposes.

“Home TV shopping is huge in Singapore, but online shopping is already huge in Korea,” Wong said. “We saw potential in bringing a livestreaming service that can appeal to a younger audience in Korea that mostly uses laptops or phones. We’ve already worked with Samsung for an education program in Vietnam and received positive feedback.”

With a small population of 5.7 million, Singapore has already switched to a digital economy to minimize the use of cash and other transactions that lead to single-use byproducts, such as business cards and bills at restaurants.

The subways, or MRT, only take rechargeable transportation cards to get around, and most taxis take payment via card or mobile apps. Paper menus are replaced by virtual ones either on tablet PCs or through QR codes scanned by customers’ phones.

On the day of the meet-up with D.Camp, participants shared their business IDs through near-field communication (NFC) systems. People could swap their information by tapping their phone to each other’s special plastic card connected to the Linq app to get their business and contact information saved to their app.

The get-together came as D.Camp seeks to expand its investment program to include foreigners starting their own businesses in Korea. 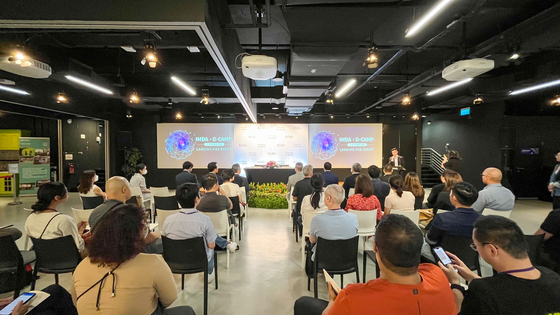 D.Camp signs an agreement with the Infocomm Media Development Authority (IMDA) on Tuesday at the Pixel start-up incubating center. [D.CAMP] 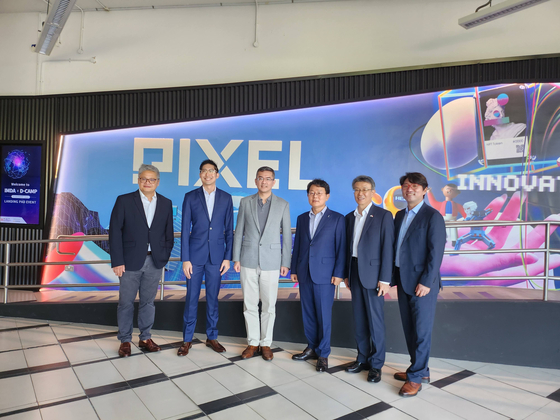 Officials from the Infocomm Media Development Authority (IMDA) and D.Camp stand for photos after signing an agreement on Tuesday at the Pixel start-up incubating center. [D.CAMP]


As a part of the effort, D.Camp signed an agreement with the Infocomm Media Development Authority (IMDA) on Tuesday to help tech start-ups in Singapore have easier access to the Korean market and Korean start-ups to Singapore.

Through the deal, D.Camp and IMDA will exchange a shortlist of promising start-ups in their respective markets and choose companies to fund. The number of companies receiving investment and the size of the funds has not yet been decided.

“Korea is one of the world’s leading economies with a highly mature tech and media market, filled with many global enterprises that are household names,” said Justin Ang, assistant chief executive of media, innovation, communication and marketing at IMDA.

“This new agreement creates fantastic opportunities for tech companies across both Singapore and Korea to accelerate their growth and expand internationally. We encourage Singapore tech companies to take full advantage of the new investment, incubation and business matchmaking opportunities made available by D.Camp and to grow their business further in Korea.”

D.Camp plans to expand its overseas reach, starting with Singapore and other Southeast Asian countries such as Indonesia and Vietnam. Singapore will serve as a stepping stone for Korean companies who plan to take their business to Asean member countries, according to Kim Young-duk, executive director of D.Camp.

“The initiative for D.Camp began with a simple question of how banks can contribute toward sustainable economic growth,” said Kim. “D.Camp, with the backing of Korea’s major banks, will lead efforts to open Korea’s start-up borders toward international entrepreneurs, and we hope this agreement will lead to many more opportunities.”