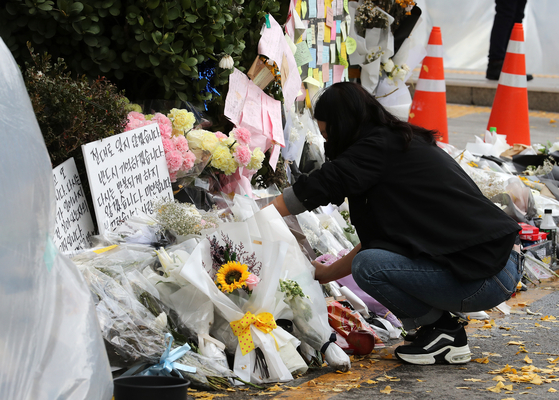 A volunteer reorganizes bouquets and letters at a makeshift memorial in front of Exit No.1 at Itaewon Station in Yongsan District, central Seoul, on Sunday. [NEWS1]


The death toll from the Itaewon crowd crush on Oct. 29 added one more person to stand at 158, according to the Central Disaster and Safety Countermeasures Headquarters Monday.

The latest victim is a young Korean woman in her 20s, according to authorities. This brings the tally up to 132 Koreans and 26 foreigners who were killed during the tragedy in central Seoul’s Itaewon during the Halloween celebrations.

Ten people are still being treated at hospitals, according to authorities.