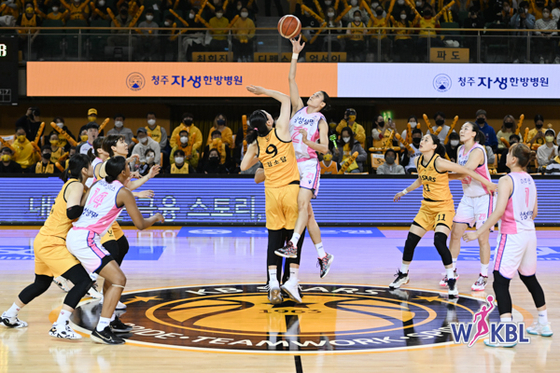 Lee Hae-ran of the Samsung Blueminx, right, vies for the ball against Kim So-dam of the KB Stars during a match on Sunday at Cheongju Gymnasium in Cheongju, North Chungcheong. [WKBL]


The reigning champions of the women’s and men’s basketball leagues are struggling to find their pace as the Cheongju KB Stars continue to stay at the bottom of the WKBL standings and the Seoul SK Knights sit second-from-last in the KBL.

The Stars are yet to find their first win this WKBL season, after losing their third match 66-55 against Samsung Life Blueminx on Sunday.

Last season, the Stars were able to put on a dazzling performance, securing the top seat in the WKBL with six games still left to play to become the first team to win the season title in 24 games since 2008, when the WKBL first combined the winter and summer seasons.

However, things are very different for the Stars this season as they are playing without star player and reigning WKBL MVP Park Ji-su.

Park, who is the only player active in both the WKBL and the WNBA, reportedly left training with the KB Stars in July and was taken to hospital because she was hyperventilating and showing signs of a panic attack. She has not been seen on the court since.

While veteran and national team regular Kang Lee-seul is leading the Stars and trying to fill in for Park, three straight losses at the start of the season mean that the Stars will have to figure out a way to make the team work without Park to be able to stay in contention for the trophy.

On the other end of the standings, the Yongin Samsung Life Blueminx and Asan Woori Bank Woori Won are on a three-match winning streak. It may be too early in the season to tell which is the team to beat this season, but fresh blood seems to have done the Blueminx some good.

While it was somewhat expected that Woori Bank would be involved in the race for the WKBL trophy as last season’s runners-up, that is not the case for the Blueminx, who finished second-from-last with more losses than wins last season. They trailed the Stars by 46.6 points with 11 wins and 19 losses. 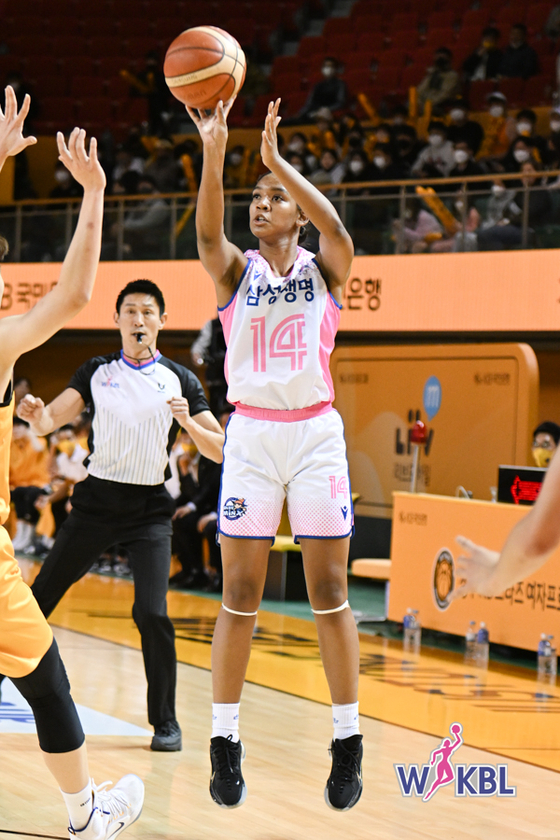 Kiana Smith of Samsung Life Blueminx plays the ball during a match against the KB Stars on Sunday at Cheongju Gymnasium in Cheongju, North Chungcheong. [WKBL]


But with rookie draft favorite Kianna Smith showing off some great skills and teamwork, the Blueminx are off to a much better start than last season. Smith started off her season with an MVP title after she racked up 21 points in her very first WKBL match.

Her stats for the last three matches — an average of 16.3 points, 5.3 rebounds and 5.3 assists per match — are looking good as well.

On the men’s side, the Seoul Knights, who last season won both the Championship title and season title for the first time, are struggling to find their pace.

After they lost their first match to the Anyang Korea Ginseng Corporation, the Knights beat Daegu Kogas Pegasus 105-90, but lost the next three matches in a row.

The Knights managed to beat Jeonju KCC 75-69 on Oct. 31 but lost their match on Sunday to the Suwon KT Sonicboom. They are currently in the second-to-last spot on the standings with just two wins and five losses.

Yeo Jun-seok to play for Gonzago University in NCAA

Sakers beat Promy 82-81 for seventh win in a row