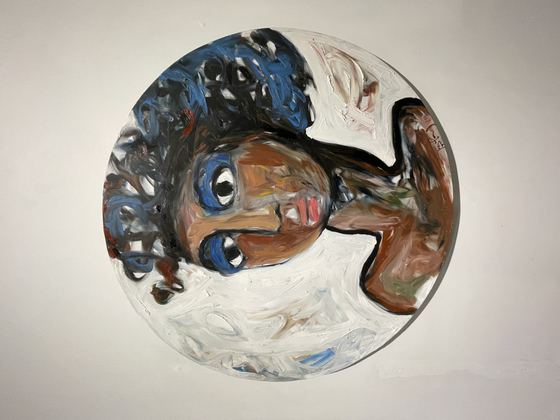 A Dominican artist Iris Pérez Romero painting that is part of her series, ″Our Sisters″ exhibited at the Trinity Gallery in Seoul. [ESTHER CHUNG]

The faces of women staring back from portraits by Dominican painter Iris Pérez Romero are meant to evoke a spirit of resilience, said the artist, who opened her first solo exhibition in Seoul on Wednesday.

“The position of women in society, in their struggles against gender violence, assault, racism, sickness, migration and the imposition of stereotypes are all part of the situations that those who inhabit my paintings face, as well as the healing process between the people they live with and are connected to,” Pérez Romero told an audience at the opening ceremony of the exhibition at the Trinity Gallery in Seoul.

Running through Nov. 12, the exhibition “The Art of Resilience,” was organized by the Dominican Embassy in Seoul and the gallery to celebrate 60 years of relations between the two countries.

“’The Art of Resilience’ presents an aesthetic language that reinterprets the Dominican efforts at addressing inequality, dealing with immigration, and ensuring non-discrimination, through artistic genres such as painting, ceramics, sculpture and performance,” said Federico Alberto Cuello Camilo, ambassador of the Dominican Republic to Korea. 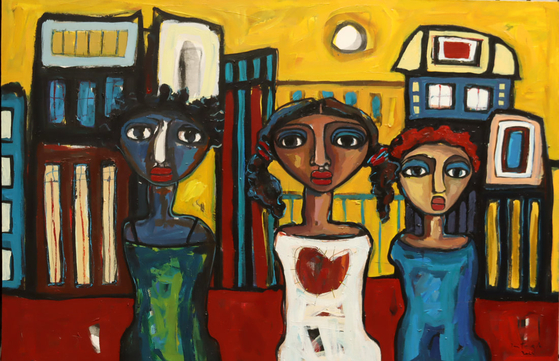 A painting by Iris Pérez Romero part of her series, ″Inside the Island,″ in 2022. [IRIS PEREZ ROMERO]

Of 25 works exhibited, a series of paintings dubbed “Inside the Island” would gives viewers an acute look at the cultural and ethnic diversity in the Dominican Republic, according to the Trinity Gallery.

“Her oil and acrylic paintings are teeming with social messages that speak through the property of different pigments,” said Trinity Park, director of the gallery. “The series addresses the ambiguous boundary between inhabitants of the island, be they natives or immigrants.”

Some 70 percent of the country’s population are of mixed African and European descent.

Pérez Romero first visited Korea in 2015 for an artistic residency at the Mosan Museum in Boryeong, South Chungcheong.

She is currently staying on Nami Island in another artistic residency, scheduled through Nov. 29. 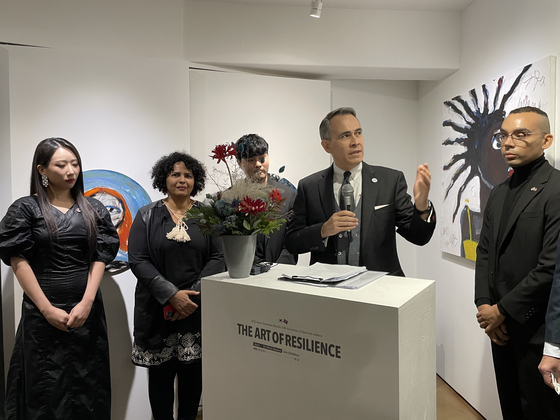 Federico Alberto Cuello Camilo, ambassador of the Dominican Republic to Korea, speaks at the opening ceremony of ″The Art of Resilience,″ a solo exhibition by Dominican artist Iris Pérez Romero, second from left, at the Trinity Gallery in Seoul on Wednesday. Trinity Park, director of the gallery, stands far left. [ESTHER CHUNG]

“I find the themes and issues around women in Korea to be quite similar to the ones we find in the Dominican Republic,” she said. “There is a strong drive among women in the Dominican Republic to be educated, but they do not have the same work opportunities as men. My paintings are my tools to express my thoughts about this, and I am glad to show them in Korea to build sorority between women of both countries.”

To commemorate 60 years of diplomatic ties between the Dominican Republic and Korea, the Dominican Embassy in Seoul has organized a number of events, including the first Dominican Film Festival in Korea in June, and the First Dominican Week in Korea in September, which included a culinary festival at the Four Seasons Seoul joined by chefs from the country including María Marte and Laura Rizek and cocktail mixologist Joel Cabrera. 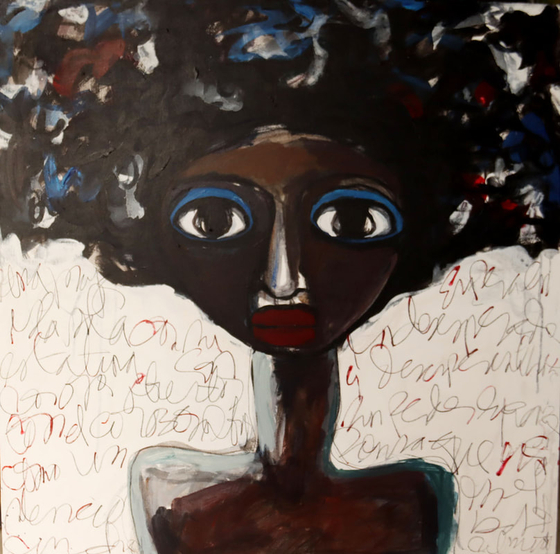 A painting by Iris Pérez Romero part of her series, ″Inside the Island,″ in 2022. [IRIS PEREZ ROMERO]