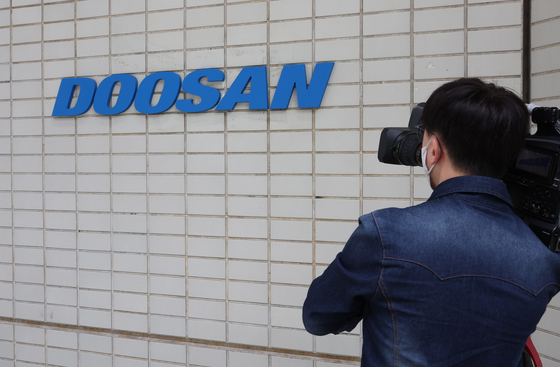 
Prosecutors raided the headquarters of Doosan Group on Tuesday in relation to allegations that former presidential candidate and current Democratic Party Chairman Lee Jae-myung, who was mayor of Seongnam from 2010 to 2018, took donations from companies via the city’s football club, Seongnam FC.

The Seongnam Branch of the Suwon District Prosecutors’ Office said it sent investigators to the Doosan Group headquarters in Jung District, central Seoul on Tuesday and combed the building for computer servers and other related materials.

Tuesday’s raid on Doosan is an extension of a series of raids related to the Seongnam FC donations that took place on Friday, during which prosecutors raided 20 locations including Doosan Engineering & Construction’s office in Gangnam District, southern Seoul, Seongnam FC and Seongnam City Hall.

The Seongnam FC probe is looking into whether Lee, during his term as mayor of Seongnam, received 16 billion won ($12.6 million) in corporate donations to the football club from companies including Doosan Group, Naver Corporation and Hyundai Department Store, between 2014 to 2016. These companies allegedly received business favors such as building permits and land use changes in return.

From Doosan Engineering & Construction, Lee allegedly received 5.5 billion won, and in turn permitted land use changes to some 9,900 square meters (106,560 square feet) of property that Doosan Group owned, from a hospital to commercial area.

At the time, Seongnam City tripled the allowed floor area ratio, building size and total floor area for the property, and it is alleged that Doosan made enormous profits from this as the value of the property reportedly skyrocketed from 7 billion won to 1 trillion won.

Seongnam City and Doosan Engineering & Construction denied the allegations, saying that there was no connection between the donations and the land use changes.