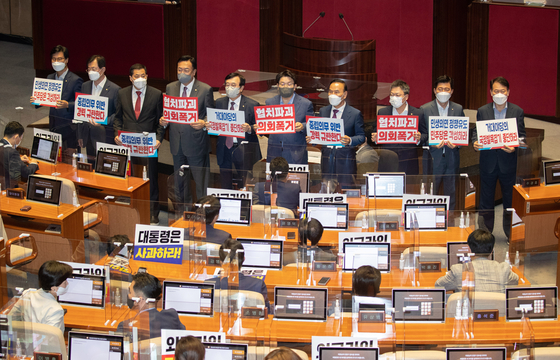 Lawmakers of the People Power Party hold up signs protesting a motion calling for the dismissal of Foreign Minister Park Jin in the National Assembly Thursday. The Democratic Party later passed the motion. [JOINT PRESS CORPS]


The liberal Democratic Party (DP) railroaded a motion through the National Assembly calling for the dismissal of Foreign Minister Park Jin, though President Yoon Suk-yeol can ignore it.

A plenary session convened at 6 p.m. after the DP, which holds a majority of 169 seats in the National Assembly, and the PPP wrangled all day to come to a consensus on the motion. It passed with 168 votes for, one against and one abstention.

It is not legally binding on the president.

Rep. Joo Ho-young, the PPP’s floor leader, earlier met National Assembly Speaker Kim Jin-pyo and asked him not to put the motion to a vote. DP floor leader Park Hong-keun, in turn, appealed to Kim for the motion to be put to a vote Thursday.

The DP and the PPP differed on whom to blame for Yoon’s profane hot mic moment at a fundraiser with U.S. President Joe Biden in New York on the sidelines of the UN General Assembly last week.

On Tuesday afternoon, the DP submitted the motion through unanimous approval, saying Yoon’s top envoy needed to be held accountable, which meant that it would have to be put to vote within 72 hours or be automatically dismissed. It requires a majority to pass.

While the motion may not be legally binding, and the president may choose to ignore it, it could still have political implications in an already deeply divided National Assembly.

Yoon was full of praise for his foreign minister when asked about the motion by reporters Thursday morning, signaling he will likely not comply with the motion if it passes.

“Foreign Minister Park Jin is a remarkably capable person who is constantly on the move around the world for the sake of the national interest to the point that I’m worried about his health,” said Yoon. “I think the people clearly know what is right and wrong.”

The DP has described Yoon’s recent weeklong trip to Britain, the United States and Canada as a “diplomatic disaster” and called for an apology from the president.

The PPP is accusing the DP of trying to fan the scandal at the cost of the Korea-U.S. alliance for its political gain.

In a video recording first released by MBC, Yoon appeared to remark to his aides while exiting the Global Fund’s Seventh Replenishment Conference on Sept. 27, “If those [expletive] do not pass it in the [parliament], [Biden] will lose face.” Some parts of Yoon’s remark in the clip were drowned out by music and background noise.

Based on the broadcaster’s subtitles and initial reports, Yoon appeared to speaking about Biden losing face if he didn’t get U.S. congressional approval for his pledge to contribute another $6 billion to the Global Fund.

The presidential office claimed the next day that the remark was actually directed at the Korean National Assembly, and that Yoon had not mentioned Biden at all.

In turn, the PPP filed a complaint with the Supreme Prosecutors’ Office against MBC CEO and President Park Sung-jae, editors and reporters on Thursday afternoon, accusing the broadcaster of defaming the president through misreporting Yoon’s remark in New York.

On Wednesday, PPP lawmakers visited MBC headquarters in Sangam-dong, western Seoul, to demand an apology from the broadcaster.

In turn, the MBC chapter of the National Union of Media Workers staged their own protest against media oppression and blocked the PPP lawmakers at the building’s entrance.

In a press briefing Thursday afternoon, presidential chief of staff Kim Dae-ki said, “In a situation where cooperation with the United States is urgently needed, the media fabricated and splintered the alliance between Korea and the United States in this way, and politicians are trying to cut the head of the general standing in front of it [in reference to the foreign minister].”

He called the situation “regrettable” and went onto stress the importance of combatting “fake news.”

This marks the seventh time in constitutional history that a motion for the dismissal of a Cabinet member was passed by the National Assembly. The last such move was six years ago, when a motion move to dismiss Agricultural Minister Kim Jae-soo was passed in 2016 but ignored by President Park Geun-hye.

Justice minister takes on YouTubers who invaded his building