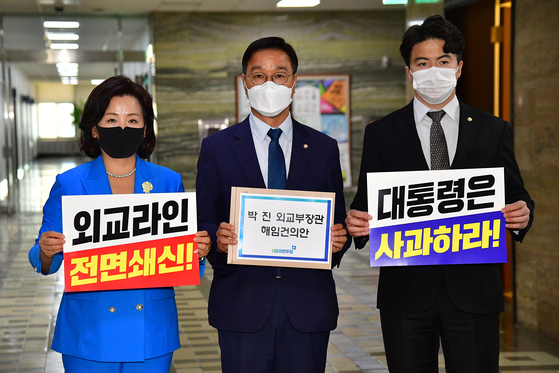 Lawmakers from the Democratic Party (DP) submit a motion for the dismissal of Foreign Minister Park Jin to hold him accountable for President Yoon Suk-yeol’s hot mic controversy last week at the National Assembly in Yeouido, western Seoul, Tuesday. [YONHAP]

Rep. Wi Seong-gon, the DP’s chief deputy floor leader, told reporters Tuesday that “all 169 DP lawmakers” decided to submit a motion in the National Assembly calling for Park’s dismissal “without any disagreement.”

The motion is expected to be passed in a plenary session on Thursday since the DP controls a majority in the National Assembly, although it will not be binding on the president in any way.

The DP and Yoon’s People Power Party (PPP) differ on whom to blame for the trip and particularly the president’s profane hot mic moment at a fundraiser with U.S. President Joe Biden in New York on the sidelines of the UN General Assembly last week.

The DP has described Yoon’s trip to Britain, the United States and Canada as a “diplomatic disaster,” called for a public apology from the president and urged his top diplomatic and security officials to be held accountable.

Rep. Park Hong-keun, the DP floor leader, said Tuesday that Yoon’s seven-day trip was “total chaos” and added that without proper repercussions “it will be difficult to restore relations with our ally.”

He called for Kim Sung-han, director of the National Security Office (NSO), Kim Tae-hyo, the first deputy director of the NSO, and senior presidential press secretary Kim Eun-hye to appear in front of a parliamentary steering committee and “clarify the facts.”

Motions to dismiss a Cabinet member have been approved three times since 1987, and led to early resignations of two ministers in the Kim Dae-jung administration.

In 2016, a motion to dismiss Agricultural Minister Kim Jae-soo was ignored by President Park Geun-hye.

The PPP has tried blaming public broadcaster MBC for the hot mic moment, claiming it misrepresenting the president’s remarks in its report. It is also accusing the DP of exaggerating the incident and potentially damaging Korea’s relations with the United States for political gains.

In a video recording first released by MBC, Yoon appeared to remark to his foreign minister and other aides while exiting the Global Fund’s Seventh Replenishment Conference on Sept. 27, “If those [expletive] do not pass it in the [parliament], [Biden] will lose face.” Some parts of Yoon’s remark in the clip were drowned out by music and background noise.

Based on the broadcaster’s subtitles and initial reports, Yoon appeared to speaking about Biden losing face if he didn’t get U.S. congressional approval for his pledge to contribute another $6 billion to the Global Fund.

The following day, senior presidential secretary for press affairs Kim claimed that the president’s remark was actually directed at the Korean National Assembly, and that he had not mentioned Biden at all. She said he used a Korean word for “throw out,” which sounded similar to Biden’s name.

According to her explanation, Yoon was talking about how he himself would be embarrassed if Korea’s National Assembly rejected the $100 million he pledged to contribute to the Global Fund as a part of efforts to fight H.I.V., tuberculosis and malaria.

In an interview on Monday, Foreign Minister Park told JTBC Newsroom that he was not able to hear the president’s remark, noting, “There were a lot of people there and various background noises.”

Based on the presidential office’s explanation, the DP would have been the target of the president’s profanity-laced remark, as the liberals control the parliament.

Lee Jae-myoung, deputy presidential spokesperson, told MBC Radio on Tuesday morning, “The essence of the problem is that President Yoon was accused of making a statement that seemed to disparage our best ally [the United States] amid a diplomatic tour.”

A senior government official told reporters Monday that the White House and U.S. Congress “understood” the Korean government’s explanation about Yoon’s remark and responded that that there was “no problem.”

Seoul explained to the White House National Security Council (NSC) that Yoon’s remark as described in the media was not about the United States, said the official. Press secretary Kim’s explanation was also delivered through diplomatic channels to the U.S. State Department.

Nonetheless, officials said Tuesday that the presidential office will not take legal action over the hot mic controversy, but the PPP might.

The PPP said Monday it will file a defamation suit against MBC President and CEO Park Sung-jae, reporters and other relevant individuals and file complaints with the Korea Communications Standards Commission and the Press Arbitration Commission.

On Tuesday afternoon, the PPP decided to establish a fact-finding task force aimed at correcting MBC’s first report, which it described as “biased broadcasting” that “distorted” the president’s words in its transcription.

PPP’s floor leader Joo Ho-young said in a party caucus that MBC “didn’t even follow the basics of journalism and confirm the facts.”

The DP’s motion to dismiss Foreign Minister Park “is coming close to becoming a threat,” said Joo. “We earnestly ask the DP not to just boast of the number of parliamentary seats it holds, but also cooperate to overcome the crisis.”

Foreign Minister Park told reporters Tuesday that it is “truly regrettable” that the DP “is relying on the power of the majority as its strategy and making even diplomacy, which is the most important line of national interest, a subject of political conflict.”

He continued, “As foreign minister of this country, I will do my best to serve the people and the national interest without faltering.”